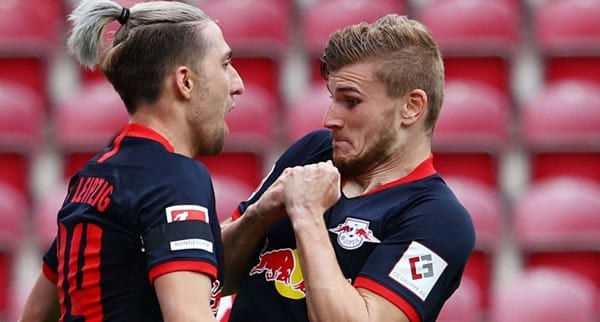 RB Leipzig defeated Hertha 4-2 at the Olympiastadion in Berlin on November 9.

RB Leipzig’s push toward the top of the Bundesliga runs into a resurgent Hertha side, which looked to be an aimless mid-table side but has roared out of the pause with two big wins, which has put the Old Lady in striking distance of a Europa League spot.

But in order to keep its upward trajectory going, Hertha will have to find a way to get points off an RB Leipzig squad that’s barely scratched at the Red Bull Arena. Only once all year has Leipzig failed to get at least a draw at home, a record that’s only bettered by Borussia Dortmund. To say the least, Hertha has its work cut out for it against a side that still has title aspirations on its mind. If the Red Bulls can get by Hertha, their schedule sets up beautifully for them to press Bayern Munich and Borussia Dortmund for the crown.

The appointment of Bruno Labbadia seems to have been precisely what Hertha needed to get back on track. Under his leadership, the Old Lady has looked very strong, seeing off its city rival Union Berlin in a 4-0 win that really could have been worse. Matheus Cunha, in particular, has seemed to respond well to his new situation, as he’s scored in both of Hertha’s matches under Labbadia.

The past two matches have made it clear that Hertha’s newfound penchant for finding the back of the net is real, as the Old Lady has now hit 12 goals in its past four games. However, the big question is how much the defense has improved under Labbadia and whether it’s enough to slow down an opponent like RB Leipzig and Timo Werner. Hertha bossed the match against Union Berlin, but Union also showed no aggression in either that match or its loss to Bayern Munich, which begs the question as to whether the shutout was more about Hertha playing tough or Union afraid to attack.

This match will definitely answer that question, as RB Leipzig isn’t afraid to attack anyone and will have no problem charging at the Hertha goal if the back line isn’t ready.

DEPOSIT $200 AND GET $200 FREE (REAL CASH BONUS) AT MYBOOKIE! MUST USE THIS SPECIAL BONUS ACTIVATION LINK TO RECEIVE THE CREDIT TO YOUR ACCOUNT!

The way you beat RB Leipzig is to slow down Timo Werner. The way you let RB Leipzig undress you is to leave Werner alone in space and give him ample time to attack your net. Mainz opted for the latter on Sunday, and it paid the price as Werner found the net three times in an easy rout. That’s now eight straight matches without a loss for the Red Bulls, and their history at the Red Bull Arena suggests they’re likely to make it nine.

RB Leipzig has shown an excellent nose for goal at home this season, scoring in all 13 matches they’ve played on their home ground. In nine of those matches, they’ve scored at least twice — and scoring twice is the magic number for the Red Bulls. When RB Leipzig finds the net at least twice at home, they’re unbeaten, having won seven and tied once. When they only score once, however, they’ve lost four and drawn once.

The Red Bulls shouldn’t have a problem scoring in this match. Only one side outside the top seven has managed to hold RB Leipzig under two goals this year, and that came back in January against Frankfurt. For the most part, this is a team that doesn’t waste chances to get points against the lesser two-thirds of the Bundesliga.

I really like both teams to score here. You’re paying some juice here at -154, but that’s to be expected given that RB Leipzig doesn’t shut out its opponents at home. A staggering 11 of 13 matches at the Red Bull Arena have seen both sides find the net, so this seems like as safe a bet as you can make. It’s not a high return, but it’s something. If it’s not enough for you, you can get plus money (+140) with RB Leipzig to win and both teams to score.

If you’re not confident enough in RB Leipzig winning the match, you might want to take a shot at the over. RB Leipzig showed plenty of firepower on the road at Mainz, and they’ve certainly got the ability to put up a significant number if Labbadia shows that he hasn’t yet fixed the Hertha back line. Four goals is definitely a reasonable target given how open matches tend to be at the Red Bull Arena. When you throw in that Hertha is clear of the relegation zone and can’t really gain anything from a draw, this has the potential to be a wide-open match.

A Hertha double chance (+220) might seem tempting given how well Hertha have played as of late and that RB Leipzig has drawn nine times in 27 matches (second-most in the Bundesliga), but it requires a lot of faith in a defense that hasn’t yet shown it can stop a top attack under Labbadia. If you want to chance it, I’d suggest betting small on it.

I think Hertha is good enough to hang around for most of the match, but I don’t think it can stay on the pitch with RB Leipzig for 90 minutes. Labbadia’s men have done well in their past two matches, but this is a step up in quality, and I think their defensive streak ends here. I expect several goals in this match, and I think this finishes 3-1 to the Red Bulls, who should remain in the thick of the title race. For the lowest favorite odds and the highest paying underdog wagering lines on the internet, check out 5Dimes Sportsbook. Making the switch to reduced juice wagering will save you thousands of dollars in risk over the long turn. (Better than ANY bonus you can receive)