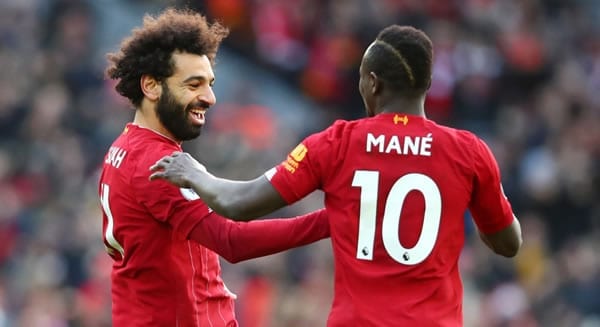 Liverpool beat Manchester City 3-1 on November 10 at Anfield in Liverpool.

Liverpool might have won the title already, but City can still spoil the Reds’ pursuit of records and deliver a punch to the champions’ ego. Getting a win here would allow City to establish itself as the clear No. 2 as well as put a bit of a question into the fans’ minds as to whether Liverpool really was the best side in the Premier League this season.

The Reds’ title has been inevitable ever since the start of March, but City has clearly been waiting for another shot at Liverpool ever since December when Liverpool proved that it could play City’s game and make it their own. With European success likely impossible for City, could the Sky Blues take out that frustration on a Liverpool side that has now failed to win in four consecutive road matches?

Under normal circumstances, this would be a tough ask for Liverpool, which hasn’t been able to dominate City the way it has the rest of the Premier League. The win over City back in December ended a three-match streak of failing to win against the Sky Blues and served as a big boost toward Liverpool’s glide path to the title.

Now, Liverpool gets the chance to play in Manchester without fans in the stands, giving the Reds a real opportunity to control the match and play the way they’re capable of showing. Liverpool had been struggling badly prior to its most recent game against Crystal Palace, but the 4-0 dissection of the Eagles — complete with goals from both Mohammed Salah and Sadio Mane — suggested that the recent struggles are over and Liverpool is now ready to finish out its championship season the right way. But as helpful as the win over Palace was, it couldn’t solve one issue: Liverpool has now gone four consecutive road matches without putting the ball in the net.

When City is fully healthy and playing the way it has since the pause ended, there aren’t many teams in the world that can compete with them. Unfortunately for the Sky Blues, that list of teams who can compete includes Liverpool, and City isn’t fully healthy after losing Sergio Aguero for the remainder of the season to a knee injury. The Sky Blues are also unlikely to feature Leroy Sane after agreeing to sell him to Bayern Munich, but Sane wasn’t in the lineup anyway after injuries had knocked him out of the starting 11, so that’s not much of an adjustment.

With no Aguero, much of the burden falls on Kevin de Bruyne, who has scored in three of City’s four matches since the pause and will probably be the most important player on the field in this matchup. When de Bruyne is playing his game, City’s possession stats are second to none. But even quality possession isn’t necessarily going to be enough in this matchup; City won the possession battle by a small margin in the first meeting, but it wasn’t enough where it mattered most.

Vegas expects both teams to score for sure in this matchup, but truth be told, that isn’t as sure a bet as you might think. Of the past ten competitive matchups between Liverpool and Manchester City, one side has been shut out five times, and given that City has seen five of its recent six matches end with one team scoreless, this might be the way to go. It’s a bold strategy, but if you’re willing to take the risk, there’s a good amount of profit available in backing Manchester City to win to nil at +310. Given that four of the teams’ past seven matches in Manchester have ended with three goals or fewer, you could also play a bit more conservatively and back City to win and under 3.5 goals, good for a +225 payout.

ALERT! Go check the odds for this match at your sportsbook. Then go register for a free account at 5Dimes and check out the odds they’re offering. Once you see the big difference and add up how much you would be saving over the course of a month or a year you will want to start realizing those savings immediately. There is no other way to put it. It’s dumb to bet on sports anywhere other than 5Dimes! (See our 5Dimes Sportsook Review for all the reasons why they’re worth making the switch)

If you can’t see Liverpool tasting defeat, you’ve got three options here. If you think this is going to be a level match, taking the draw and both teams to score offers an enticing +325. Otherwise, you’re going to want to take the Reds on a “draw no bet” at +140, or you’re going to need to take the over. A Liverpool win is almost sure to hit the over because the home team has only been shut out once in the past 20 meetings between these teams, that being a scoreless draw at Anfield in 2018. The last time Liverpool shut out City in a Premier League match in Manchester came back in 2010, and I don’t expect that to happen here.

Liverpool has been the more consistent side, but City has been the better side since the resumption. The loss of Aguero makes this a tougher call, but City didn’t need him to dominate Newcastle, and Liverpool still hasn’t proven that it’s really back on top of its game. The Reds did rout Crystal Palace, but they haven’t yet proven that they’re able to get the job done away from Anfield.

It’s a very risky maneuver here, especially given how good Liverpool is, but a line of +1200 is too much to pass up when we look at what’s been happening as of late with both of these teams. I’m going to take that +1200 and take City to win this match 2-0 and deliver a blow to Liverpool’s championship celebrations. We tried to save you money above with the 5Dimes advertisement. If you don’t about getting the best priced odds available and are more of the bonus hunter type, check out MyBookie (see our review here) who we have a special deal with where you can deposit anywhere from $100 to $300 and they’ll give you a dollar for dollar matching 100% REAL CASH bonus. In summary, they double your deposit so you have free money to play with. You must be a new client and sign up through this special link to take adantage of this offer.