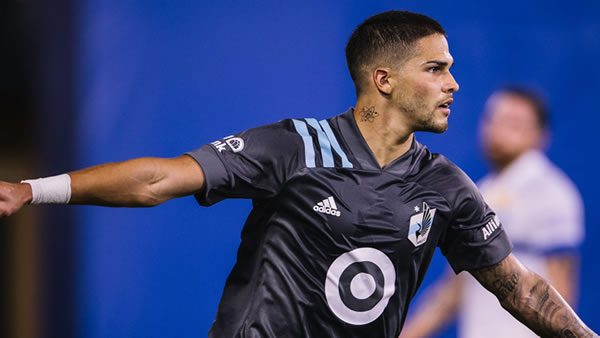 The sides drew 1-1 on March 5 at Allianz Field in Saint Paul, Minn.

With ten matches to go in the regular season, it’s now positioning time in the Western Conference. Just four points separate third-place Dallas from eighth-place (and out of the playoffs) Seattle, and Nashville and Minnesota find themselves right in the midst of this logjam. Neither team is likely to catch up to Los Angeles FC or Austin, but third place is still a very attainable goal for a pair of teams that have basically canceled each other out when they’ve matched up with each other. After getting off to a solid start to the season, Nashville has reverted to last year’s role as the masters of the draw. The Six Strings haven’t exactly made GEODIS Park a fortress either since it opened; they’ve only managed one win at home in their past eight matches in their building. That’s opened the door for teams like Minnesota to both catch and pass them, and the Loons now sit two points ahead of NSC after ripping off five wins in a seven-match unbeaten streak before finally falling to Colorado. If they can get another result here, they’ll catch up to Dallas and be in a prime position to control their path toward the No. 3 seed.

As long as the Loons have Emanuel Reynoso on the pitch, they have the chance to be dangerous. Reynoso suffered an injury in a friendly with English side Everton, but Minnesota’s leading scorer returned to action in the draw with Portland and played in the MLS All-Star Game, so it appears that he’s back to full strength. With nine goals on the season, he’s the Loons’ top option for scoring goals. However, he’s far from a one-man team these days. Luis Amarilla has really come on strong this season, scoring three goals in Minnesota’s past two matches and eight on the year. The issue now for Minnesota is the back four, which has suddenly become shaky after what had been several solid performances. Giving up eight goals in two matches is a significant aberration for a side that had been giving up just over one goal per match, and the Loons have to get that fixed if they’re going to continue their upward trajectory.

Eventually, Nashville is going to figure out how to play at home, but it just doesn’t seem to be happening this season. The Six Strings have done basically everything but win matches in their home park in 2021, as they keep finding ways to turn wins into draws and draws into defeats in front of their fans. Over their past eight matches at home, only Seattle failed to leave with at least a point. The match with Toronto was another not-so-shining example. On paper, NSC had the better of the play, firing 21 shots to Toronto’s 10. But Nashville only put six on goal compared to eight from the Reds, which led to Toronto cashing in on four chances and taking all three points. With 13 goals this season, Hany Mukhtar has been excellent, but he needs someone else backing him up in both the attack and in the back four. If not, Nashville is going to continue to take one point when it needs three.

These teams have canceled each other out in both of their meetings in their history, and I think there’s a good chance that happens again. Prior to the explosion of goals against Toronto, Nashville had scored exactly once in five straight matches, with three of those finishing all square. I think the Six Strings are good value for at least one marker given Minnesota’s issues at the back line as of late, which says that taking both teams to score at -145 looks like a solid option. Minnesota’s double chance at -115 is also too good to pass up, as the Loons have looked the stronger side for the past month and seem like they can at least get something from this match. If we’re getting aggressive, I’m going with a draw and both teams to score at +350. I don’t think this will finish scoreless, so I’m very willing to forfeit the straight draw at +255 for the higher payout if both teams can find the net. These teams are more offensive-minded than they were in 2020 when they played out a scoreless draw, and I don’t see this ending without at least one goal in the net.

Minnesota isn’t getting anywhere near enough respect after its past two matches, but I think the Loons were also a bit distracted by hosting the MLS All-Star Game. They should be back on form now, and I think they’ll get back on track here by getting something out of this match. I’ll back the teams to share the points with a 1-1 draw at +600.