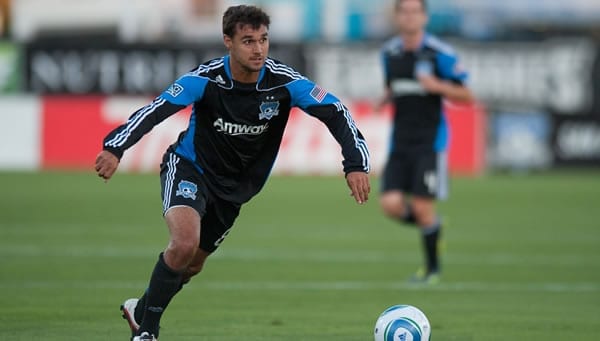 Get the best soccer lines and odds at 5Dimes They offer -105 odds on sides and totals opposed to -110 elsewhere This may not sound like much, but it is! HUGE savings!

San Jose got ripped 5-2 by Minnesota on March 7. Seattle drew 1-1 with Columbus on March 7.

An overlooked secondary rivalry takes center stage as the leading game of Group B, which has changed drastically since this matchup was announced. At the time of this writing, Group B had been reduced to three teams following FC Dallas’ withdrawal from the MLS is Back Tournament, which could change the outlook of this match in a big way.

Seattle is the favorite to come out of this group as the defending MLS champions and the only member of the group that made the playoffs last year, but San Jose made some real progress last year and could be on its way to a return to the postseason this year. Can they get a result against Seattle and put themselves in good shape to reach the knockout stages?

On the one hand, San Jose got off to an excellent start to the season, getting a quality draw against an excellent Toronto FC side. On the other, they followed it up by getting drilled at home by Minnesota, which has raised all sorts of questions about the Quakes’ defense and whether it’s really ready to compete with the likes of Seattle and Los Angeles FC.

The offense usually hasn’t been a problem for the Quakes, who have been anchored for years by veteran scorer Chris Wondolowski, the highest scorer in MLS history with 159 goals to his name. Wondo plans to call it a career at the end of this season, and he’d love nothing more than to make one last run at a trophy before he hangs up his cleats. To do it in this tournament, he’s going to need to get some help from the backline, which has often been suspect in the past. When San Jose’s man-marking style is on point, the Quakes can really frustrate opponents and keep scores down. But when the Earthquakes have made mistakes, the consequences have often been disastrous, as occurred against Minnesota. Against a side of Seattle’s quality, the Quakes cannot afford to make any mistakes.

No team is better poised to take advantage of the pause than the Sounders, who have made a habit of sleepwalking through the first two months of the season and then firing on all cylinders to make a run at the playoffs. The formula has worked wonders for Seattle, which has made three of the past four MLS Cups and won two of them. Now the Sounders get to start the season in July, which has traditionally been their time.

The fact that this is a veteran squad that knows how to win should also pay significant dividends in this unique format. Unlike some of the other big teams at this tournament, Seattle will have its stars on the pitch, and the combination of Nicolas Lodeiro and Raul Ruidiaz have proven deadly in tournament play. However, Seattle’s most important weapon might be Jordan Morris, who struck twice against Chicago and could be on track for a big year. If he can pick up where he left off, the Sounders will be the team to beat in this group.

San Jose traditionally plays Seattle tough but hasn’t been able to get many results against the Sounders in recent years. In the teams’ past five meetings, the Sounders have claimed four of them and shut out the Earthquakes on three occasions. Because of that, I think there’s plenty of value in backing the Sounders to win to nil. Even though the Sounders have allowed goals in each of their past five matches dating back to last season, they’ve tended to be strong at the back against San Jose, and I think the heat of Florida will play to their advantage.

I also like the under to hit in this match. San Jose has held Seattle to two goals or less in four of their past five meetings, and if I’m backing the Sounders to shut out the Earthquakes, that means all the goals I expect will come from the Rave Green. I see this being the kind of match where Seattle scores a goal early in the second half and then holds on until San Jose gets desperate and allows the Sounders to put the game away. Based on that, you might also look into a scoreless first half, which is paying off at +220.

The opening match of the group stage is usually a low-scoring affair, as both sides want to make sure they at least get something out of it and avoid putting themselves behind the eight-ball. I can see the Earthquakes hanging around for 60 to 70 minutes, but after that, I expect the youth to catch up with them and allow the Sounders to control the remainder of the match.

I think there’s a lot of value in backing the Sounders to win 2-0 at +1200, and that’s the way I’m going to play it. Bet your soccer picks for free by taking advantage of a nice 50% real cash bonus at Bovada Sportsbook! Simply deposit anywhere from $100 to $500 and they’ll match you with an addtonal amount, equal to your deposit amount! (Example: Deposit $500 and get an extra $250 added to your betting account!) Go here to sign up now!