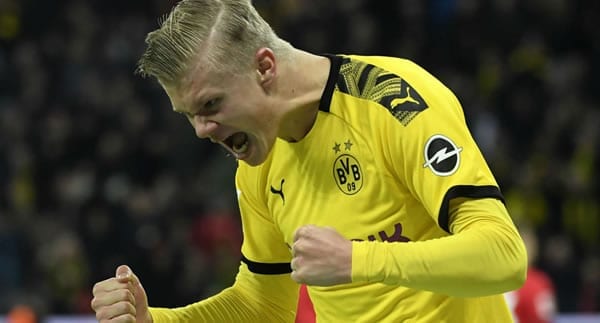 Moneyline: Schalke +650/Dortmund -223/Draw +340. Find the absolute lowest/best odds for this match at 5Dimes Sportsbook. They offer reduced vigorish wagering an ALL sports!

The teams drew 0-0 on October 26 at Schalke’s Veltins-Arena.

The Bundesliga is coming back with a bang, as they’re opening up with the Revierderby rivalry match. These two squads are separated by just 23 miles and have faced each other twice a year ever since Schalke’s promotion to the Bundesliga in 1991. Over the past few years, this matchup has been too close to call, and it’s played out exactly that way on the pitch, as five of the teams’ past eight meetings have ended in a draw.

In fact, Dortmund hasn’t beaten Schalke at Signal Iduna Park since 2015, as Schalke won last year’s away matchup by a 4-2 count, and the previous two meetings ended in draws of 4-4 and 0-0.

No team needed the time off more than Schalke, because the Royal Blues have played atrocious soccer in the two months before the season was interrupted by COVID-19. The fact that Schalke is still in a Europa League is entirely based on how well they started the season. Schalke took 28 points out of a possible 45 in its first 15 matches by winning eight of them and drawing four others.

But since then, Schalke is 1-3-6 and has been just awful at finding the net. Over their past seven matches, the Royal Blues have scored only two goals, while letting 15 into their own net. Incredibly, it gets worse. Schalke hasn’t scored a goal away from Veltins-Arena in 2020, as the last time it scored on the road was on December 18 at Wolfsburg. Since then, Schalke has gone away from home four times and been outscored 8-0, managing two scoreless draws and a pair of embarrassing defeats to Bayern Munich and FC Koln. They’ve scored just once in their past four matches, a goal by American Weston McKinnie.

In short, this team has been playing terribly as of late, and whether they can recover their form depends greatly on whether leading scorer Suat Serdar is fit to go. He didn’t make much of an impact the last time he played, though, as Schalke absorbed a 5-0 loss to RB Leipzig on February 22 with Serdar in the lineup.

As bad as Schalke has been as of late, Dortmund has been that good. The Yellow and Black have been winning matches and scoring goals in bunches, especially when they play at Signal Iduna Park. Over their past eight home matches, Dortmund has put home three goals or more on seven occasions, with the only exception coming February 29 in a 1-0 win over Freiburg. Perhaps sensing that it has a real shot to finally dethrone Bayern Munich, Dortmund has been on fire in 2020, winning seven of its eight matches since the calendar turned. Its only slip came in a thrilling 4-3 loss at Bayer Leverkusen, and that only because of a disastrous two-minute stretch in the final 10 minutes that saw Dortmund concede two goals.

What’s more, Dortmund’s home ground has been an absolute fortress this season, as it’s the only squad in the Bundesliga that hasn’t lost a match at home all season. But there is a bit of a worry there: Dortmund has an annoying habit of occasionally playing down to its competition. Of the three teams that have gotten a draw at Signal Iduna, two of them are Werder Bremen and SC Paderborn, the two teams in the relegation zone. When Dortmund wants to be on, their lineup has been next to impossible to stop, especially now that Norwegian phenom Erling Haaland (nine goals in eight matches) has established himself in the Dortmund lineup. But there’s always a question of motivation with this group.

If Schalke was even close to being on form, I’d say that a draw would be excellent value here, given that this is a rivalry matchup, and both teams have plenty to play for. But Schalke has been just horrific, and Dortmund is charging hard at Bayern Munich’s hold on first place. So I don’t want anything to do with backing Schalke here, even though they’ve had recent success at Signal Iduna. I think Dortmund sees a wounded animal here and is going to attempt to bury its big rival. Because of that, I think 3.5 goals is a reasonable target, and at +176, I think there’s a lot to like about taking the over here.

However, you’re going to get no value out of backing Dortmund on the money line, so for the match result, I’m going to recommend either taking Dortmund to cover the one-goal spread or returning Dortmund on a win to nil bet for +150. Given that Schalke hasn’t scored on the road in three months (not counting the time off for COVID-19) and Dortmund has kept a clean sheet (shutout) in its past three home matches, I think Dortmund to win to nil represents substantial value here.

This is a tough one because you’ve got to hit it exactly, and there’s a real question of how much damage Dortmund will think is enough before calling it a day. Given that Schalke has shown a propensity to get blown out on the road against good teams and Dortmund would love to embarrass its rival after three years of frustration at home (plus improve its goal differential in case of a tie with Bayern Munich), I expect the Yellow and Black to go for a big number.

I’m seeing numbers of +2000 for Dortmund to win 4-0, and I think there’s a real chance that occurs. It’s a gamble, but I’m going to back the big number in this matchup in hopes that Dortmund can pick up where it left off. Bet your Schalke vs. Dortmund pick FOR FREE by taking advantage of a special 100% REAL CASH bonus at MyBookie! You must use this special link to register and activate the bonus offer and make sure PREDICT100 is in the promo/bonus code box in order to be credited!