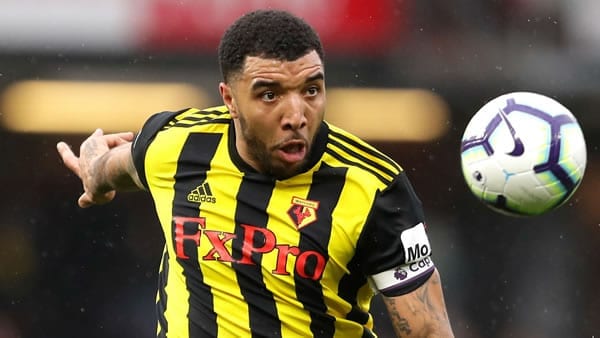 Two teams hovering just above the relegation zone can all but guarantee safety for next season if they can get a victory. If Aston Villa does not defeat Everton on Wednesday (not yet played at the time of this writing), a win here would virtually guarantee Premier League status for next season, especially if it’s West Ham, who has a superior goal difference.

Both teams have done just enough to stave off relegation by getting a few key wins, and one more would make a world of difference in their survival. The question is, will that create a wide-open match that features plenty of chances, or will these teams play cautious and try to get one point?

Playing before no fans hasn’t made life on the road any easier for Watford, which has been just horrific away from home. Only Norwich City and Bournemouth have fewer wins away from home than Watford, which has now lost seven in a row on the road, including a loss to Tranmere Rovers, which plays in League Two, three levels below Watford. That’s the rough equivalent of the Pittsburgh Pirates losing a game to the West Michigan Whitecaps.

It somehow gets worse for Watford, which has not scored a goal away from home since Feb. 8 in a 1-1 draw against Brighton. For the year, the Hornets have just 11 goals away from home, and five of those came against Bournemouth and Norwich City, the two worst teams in the league. For Watford to finally get something out of a road trip, it’s going to have to get a big performance from Troy Deeney. Deeney put home both goals in Watford’s win over Newcastle, but both of them were scored on a penalty. Watford can’t count on that a second time, and it’s going to need Deeney to find a goal from the run of play if it’s going to get a result.

London Stadium has seen its share of weird results since the restart began. On the one hand, West Ham managed to surprise Chelsea at home, besting the Blues by a 3-2 margin. On the other, Burnley and Wolves both came to London and left with shutout victories over the Hammers, which had West Ham in a precarious position until they crushed doomed Norwich on the road. So which side will show up here?

Ideally, it’s going to be the team that played solid defense at Carrow Road in the win over Norwich. Granted, shutting out Norwich is no significant accomplishment given how pathetic the Canaries’ offense has been, but it’s more than Watford could do at home (the Hornets won 2-1 over Norwich) and it ended a 15-match streak of West Ham giving up a goal. It also saw Michail Antonio dominate the match by scoring all four goals, and if he can play anywhere near that well against Watford, the Hammers will be happy with the result.

Something has to give here. Watford has been a useful side at home, but the Hornets have been a horror show when they leave Vicarage Road. But on the other side of the coin, West Ham has allowed eight consecutive teams to come to the London Stadium and leave with a goal, including Championship-level West Bromwich Albion. Coincidentally, Watford’s last win away from home and West Ham’s previous home shutout both came against Bournemouth, which is why the Cherries are almost certain to be relegated.

The point is that while it might be tempting to take West Ham to win to nil at +280 given Watford’s track record, it’s probably better to be a bit more conservative in this situation. West Ham’s home defense has been rather poor, so it’s probably best to simply take plus money on the Hammers to win and call it good. If you can’t resist the idea of taking a total along with the result, I’d play West Ham to win and under 3.5 goals at +200. Watford probably will get shut out given its poor road performances, but West Ham’s backline has been just awful at home, so I want that insurance against a Watford goal.

If you’re looking for an early score, I’d bet on West Ham to score the first goal of the match in the first half at +155. Watford has given up the first goal of the game in four consecutive matches, and all four times, that marker came in the first half. Plus, West Ham has seen a goal scored in the first half of four consecutive matches. Given the teams’ recent form, this represents excellent value. Bet this weekend’s soccer games for FREE by taking advantage of a 50% Real Cash sign-up bonus at one of the web’s oldest and most trusted sportsbooks: Bovada Sportsbook! Deposit $100 and get $50 free! Deposit $200 and get $100 free! Deposit $500 and get $250 free! (Max bonus is $250) Take advantage of this free loot now!

West Ham has looked to be the better side, and Watford has been a royal mess whenever they’ve left Vicarage Road. The Hornets simply look out of ideas, and it’s only because Bournemouth and Aston Villa have dug the hole too deep that they’re likely to survive.

West Ham is the better side and should snatch all three points, and although I warned against betting the shutout above because of their history, I’m willing to take them to get that elusive shutout for my correct score bet. I see this match finishing 2-0 to West Ham, which comes with a +1100 payout.