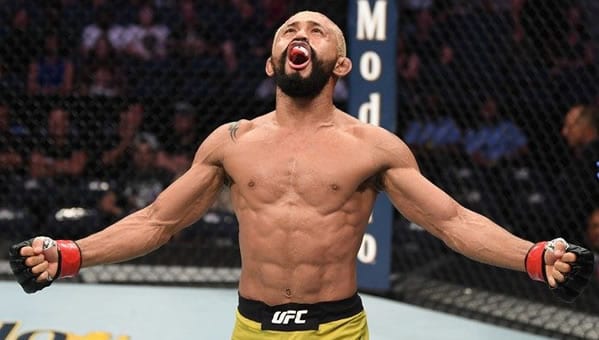 The main event of UFC 263 features a fight for all the marbles in the flyweight division. In a much anticipated rematch, UFC Flyweight Champion Deiveson Figueiredo will take on top contender Brandon Moreno. Their first fight was a good one, with both men taking turns in issuing punishment to the other. And after five well-contested rounds, the fight was ruled a draw, with Figueiredo retaining his title. Can he get a win this time, or can Moreno maybe do a little better?

Deiveson Figueiredo makes the third defense of his UFC Flyweight Title when he battles Brandon Moreno in a rematch from a draw in December. It was a good fight, and we could be looking at the two best 125-pounders in the world. Moreno, six years younger than the Brazilian champion at 27, looks to make a big splash here, while Figueiredo looks to solidify his championship credentials. Let’s break it down!

There may be some clues from the conditions of the first fight. It’s worth pointing out that Figueiredo was hurried into the spot, taking on this title defense in a record 21 days after defending his title against Alex Perez. That’s an awfully quick turnaround for a world champion fighter, and perhaps with a more realistic buildup to this fight, he can put forth a better performance. Not to take anything away from what Moreno did, but maybe Figueiredo wasn’t completely at his best.

The decision itself probably painted Figueiredo in a worse light than he deserved. If not for a point being deducted in the third round, he would have won. Or if one of the judges didn’t bizarrely score the fifth round for Moreno, despite the champion clearly winning it, he would also have won. Perhaps the draw verdict wasn’t so awful from an overall standpoint, but it took some strange little wrinkles for Moreno to not lose that fight.

When you look at Figueiredo more closely, there is little in which to take him to the task. He lost to Jussier Formiga in 2019, and that’s the only time he tasted defeat in a career that is nearly a decade old. His only slipups since then were more related to conditions and not so much his performances—missing weight in what should have been a title win over Joseph Benavides and then the draw against Moreno where a lot needed to go wrong for that to happen.

Moreno’s path to this spot has been more of a zig-zag ascent. After starting his career at a modest 3-3, a streak of 11 straight wins got him back on track. A few losses slowed his progress, but then he got on a roll, beating guys like Kai-Kara France and Formiga to line up the title shot. He is unbeaten in his last six fights. A pro since he was 17, Moreno hasn’t had it easy. Fighting out of Tijuana, he came up the hard way. His ascent hasn’t been a straight upward line. He has taken some lumps, got released by the UFC, and kept at it, eventually establishing himself as a top 125-pounder, one of the very best in the world.

Bet all the UFC fights (Winner, Distance, and more) at MyBookie >>>

In terms of age, Moreno could be the one more likely to improve. That seems more apt to happen with a 27-year old fighter than a 33-year old one. And this is a weight where those ages really make a difference. At the higher weight classifications, no one bats an eyelash if a fighter is 33. But at 125 pounds, it’s a bit ripe. And it would be unfortunate if Figueiredo’s rise to the top of the division also coincided with an ebbing in his skills.

I just feel that it may actually be Figueiredo who is more likely to improve in this fight. First, he understands what he is up against, and after some easier fights, maybe he took Moreno lightly. Maybe he was a little burned-out, having to come back so quickly after a full camp and a title defense just three weeks prior. And knowing the closeness of the matchup, look for Figueiredo to mind his Ps and Qs a little better this time in regards to fouls.

Still, having more time to prepare will also help Moreno, who now has the proper time to focus and train for a fight of this magnitude. He showed enough in that fight to warrant him being a very legitimate threat. Despite a case for Figueiredo winning or being able to improve for this fight with a tweak here or there, there was a definitely palpable closeness to their first fight that seemed fairly legitimate. Moreno was able to rock the champion and absorb his punishment in return. Now with a full camp, his ambitions can’t be taken lightly even by the most-ardent Figueiredo supporters.

Moreno has a lot going for him in this fight. Age is on his side, and he’s taller, has several inches in reach, and knows he can hang in there for 25 minutes with the best in the world. I just can’t get away from the nagging concept that even while catching every possible break in the first fight, Moreno could only manage a draw. Without those fouls or judging brain-farts, I see a clearer decision win for Figueiredo this time around. I’ll take the champion.

I’m betting on Deiveson Figueiredo at -265 betting odds. Figueiredo is far from unbeatable, and Moreno is a supremely capable fighter with a lot of skills. But I don’t think all the stars will line up quite as well for Moreno this time, whose winning case needs more help for it to come off than Figueiredo’s.