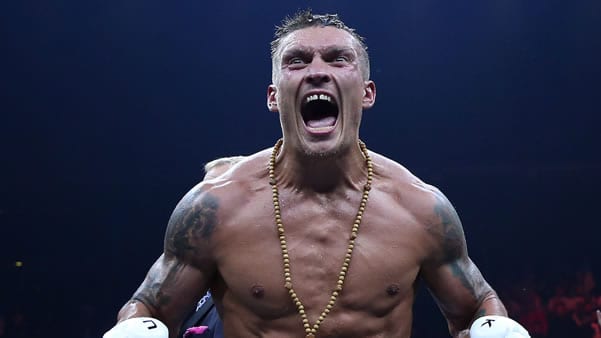 Anthony Joshua defends his heavyweight title belts against former cruiserweight kingpin Oleksandr Usyk. While this isn’t the fight Joshua and his supporters wanted, with a huge domestic battle with Tyson Fury scuttled with Deontay Wilder forcefully invoking the rematch clause, it’s still a dangerous fight for Joshua against a smaller, but massively-credentialed and unbeaten champion in Usyk. Will Joshua keep the big fights in his crosshairs or can Usyk spring the upset?

For the purposes of this fight, maybe Joshua losing to Andy Ruiz was a good thing. Sure, it showed a certain vulnerability, but that was far too recent of a slip-up that you could reasonably forecast that happening again. If Usyk wins, it will be on the merit of his game and not any apathy on Joshua’s part. One senses he understands the full scope of this challenge. Sure, Usyk is relatively-new to the heavyweight division and Joshua is a massive heavyweight, so he is the bigger man by a fairly large measure. But Usyk certainly brings a lot to the table.

Usyk, a gold medal champion for Ukraine in the 2012 Olympics, is pretty advanced in age at 34 for a pro with just 18 fights. But those 18 fights contain a lot of accomplishments. His amateur career is above reproach, as he was one of the best at his weight ever. He was moved fairly gradually, but before long, he was winning big fights at cruiserweight. He eventually claimed all four belts at a time when there were some really good cruiserweights fighting. And they were big guys too—often taller than Usyk, who has strong dimensions at 6’3” with a 78-inch reach. It’s actually defensible on some levels to call Usyk the most-accomplished cruiserweight of all time.

His heavyweight career is all but two fights old. First came a TKO over so-so Chazz Witherspoon. Then in September, he took on perennial contender and gatekeeper Dereck Chisora, scoring a unanimous 12-round decision. It might not have been the performance one wanted to see from someone who might beat the likes of Joshua, but Chisora has made a lot of really good fighters have to work really hard to get the win and that’s what Usyk did.

Usyk is a southpaw with considerable skill. His footwork is excellent and his stamina allows him to carry out his plan without the normal fatigue that plagues some heavyweights. His rapier-like jab is more effective than most southpaws who don’t have room to work it against orthodox opponents. The jab really messes up opponents, not so much from a power standpoint, but just in the organization of their defense and how he keeps them preoccupied. And when opponents think one of his probes are coming in, he can easily fool them and then sling through a really hard shot that they’re not prepared to absorb—the kinds of shots that do damage.

Usyk makes it all come together by being really relaxed and loose in the ring. His feet are some of the best for man near or at his size. He’s ultimately coordinated, taking small steps to keep himself in the best position, pivoting off angles, and shifting his body inside the pocket. Once he starts working off the jab, a vast variety of punches and combinations start honing in. He’s an expert on timing. He sets his opponents off on a course and then shifts the theme and leaves opponents guessing.

A lot of these techniques could work against Joshua. The champion is not a big stiff, but he’s not the loosest, nor the quickest of fighters. A fighter of considerable brawn, size, and power, he hasn’t needed to perfect the finer points to the extent that Usyk has. But he still possesses the great equalizer of punching power. And size. Usyk has been able to make his game rise to the top against a smaller and weaker caliber of opponent. His margin for error has been larger. He gets no margin here. If Joshua zips in some punishing shots, it could signal a downhill course for Usyk, who has never tasted anything like what Joshua can bring to the table.

While not as complex with his overall game, Joshua is actually quite adept at relying on his size and reach, keeping opponents away with those big arms and just the fact that foes are rightfully leery of his power. He can control a fight with his size and power and that could rear its head here against a man only in his third heavyweight fight. Joshua has been a heavyweight since his early teens. There’s a difference between being a born heavyweight and a guy who eventually becomes a heavyweight. Having your first heavyweight fight at age 32-33, as Usyk did, means you’re not really a true heavyweight. And that’s especially true, simply in relation to who he is fighting.

This might sound simplistic, but to beat Joshua, you have to be a robust man. Otherwise, not only is generating the kind of power needed to trouble him a problem, but absorbing his punishment becomes a really dicey proposition. Pound-for-pound, Usyk might even be better for all we know. But even though the weights won’t show it. Joshua is naturally a bigger man by about 20% and that’s going to be too much for Usyk to buck. At +200 at MyBookie, you can find a lot worse choices than the supremely-skilled and talented Usyk, but I see Joshua’s size and power having the final say. I’ll take Joshua.

I’m betting on Anthony Joshua at -260 betting odds. Moving up one weight class usually isn’t a big deal unless it’s from cruiserweight to heavyweight, where the spread can easily exceed fifty pounds. Usyk is a major threat, but it’s just too difficult to foresee him being able to absorb the punishment he will need to take to make his game-plan work.