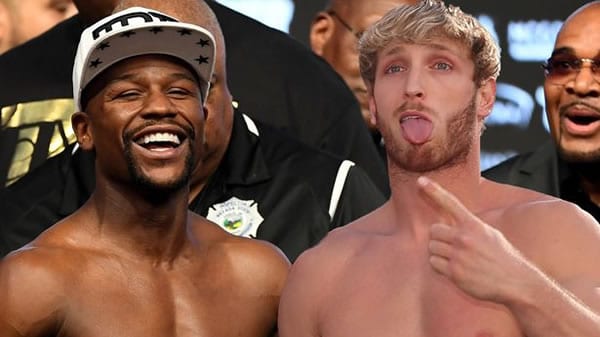 Floyd Mayweather and Logan Paul will box in an eight-round exhibition on June 5, with the locale still being hashed out as of press time. There is a comical nature to this bout that gives it a very different look. One—it’s an exhibition. A lot comes with that, which we’ll get into here in a bit. Mayweather cannot weigh over 160, while Paul can’t exceed 190 pounds, so there is that wrinkle, as well. And let’s not forget this is a pairing between a “YouTube star” who lost his only pro fight to another non-boxer and the greatest boxer of his generation in the 50-0 Mayweather. Where do you even start?

Being that the Paul brothers operate in boxing without ever fighting other boxers, it’s hard to get a real read on the situation. But it almost seems that Logan is the lesser of just his immediate family. Whereas Jake at least starched athletes like Nate Robinson and Ben Askren, brother Logan lost a decision to KSI, another one of these YouTube celebs. He may have an argument that he should have won that fight, but debating whether you beat some other internet loudmouth is futile when you’re about to face Floyd Mayweather.

The exhibition format carries with it a lot of extra baggage that makes betting on it a bit tricky. And this is nothing new, as some seem to think. Sure, it might seem improper for a boxing great like Mayweather to be taking on an 0-1 novelty like Paul, but exhibitions of all kinds have been en vogue at different times in boxing history. Generally, with the reduced stakes, the affair will begin to resemble wrestling. Competition and reality take a back seat to entertainment and “putting on a show.”

It’s important to gauge Mayweather’s approach. It is up to him how this goes. If he wants, he can go out there and smoke this guy in under half a round. He could also carry him, allow Paul to have some success before bringing a pleasant affair to a painful conclusion. And it also depends on Paul’s behavior. There are any number of things he can do to draw the ire of Mayweather, either in the fight or leading up to it. And these things will likely determine how this fight goes. If Paul is earnest and behaves himself without doing anything dirty or too provocative, Mayweather will treat him nicer. If he attempts to create a stir and starts trying to rough up Mayweather, it could get more serious.

It’s not often in a fighting sport where the 26-year old guy who is six-two and 200 pounds is a no-hoper against a 44-year old guy who weighs a buck-fifty. Potential backers of Paul in this spot would hope a significant age and size advantage could resonate on some level. But while some 44-year old greats might be totally washed-up, the same cannot be said for Floyd. There are some people who are gifted with a longer-lasting youthfulness in this life, and Mayweather is one of the blessed ones, barely distinguishable from the man who once ran this sport. He is not in bad shape. He hasn’t suddenly started abusing himself. And he never showed any real erosion in the ring.

Therefore, what can Paul really do? What scary boxing skills has he shown that would bridge the gap between an all-time great and a kid who is maybe sort of tough in a vague way? If you can’t get the clear upper hand on the likes of “KSI,” what is going to change against Floyd? If you’re not even the best Paul brother, how are you going to beat someone who was the best in the world?

The levels in this business need to be accounted for. Jumping in there against another YouTube celebrity and losing is light years from being a 50-0 great who beat endless champions. Thirty pounds and youth offers some hope for Paul, perhaps, but the context in which these two men have operated is difficult to quantify with words. What makes it hard for Paul is that the very things that he can use to try to get the upper hand will likely only lead to a more-emphatic demise. If Paul tries to rough up Mayweather and use his weight to throw Floyd around and get him rattled, “Money” will only zero in with bad intentions that much sooner.

The thing is that the exhibition format throws the fight into somewhat of a screwball context. They can span the entire spectrum—from spirited fights that are real as it gets, friendly sparring sessions where no one gets hurt, and everything in between. Some of them, including Mayweather’s appearance in Japan a few years back, actually look somewhat fake. So that’s important to consider in the event that you tune in on June 5 and see something you didn’t quite prepare to see.

Paul is in a no-lose situation. No one is expecting him to prevail in any kind of substantive way. He can just go in there, see how it goes, and not worry about results so much. Exposure appears to be a greater focus than boxing status. For Mayweather, there is a greater potential for embarrassment, and I expect him to act accordingly. If a 50-0 Hall of Fame career is rendered moot by a little size and some youth, then everything I ever believed just doesn’t count. I expect Floyd to emerge victoriously.

I’m betting on Floyd Mayweather at -2000 betting odds. Whatever Paul brings to the table, and however this exhibition format plays out, it’s hard to imagine a scenario where Floyd comes up short. And in the event that Paul pulled this off, I’d like better than +900 for my leap of faith.