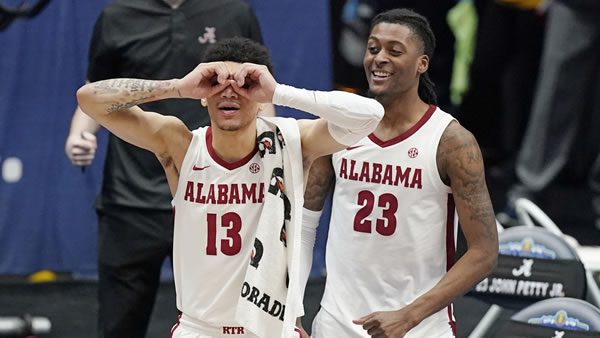 Is this a step back for Alabama after such a great run a year ago? Nate Oats’ team was a No. 2 seed a year ago, but the Tide have suffered a couple of head-scratchers this season and haven’t looked quite like the well-oiled machine they became a season ago. That said, they do also have a win over Gonzaga on the resume, so it hasn’t been too much of a step back for Alabama if one at all. The Tide still plays incredibly quick and mostly shoots the ball pretty well, making them a tough out for anyone to face.

If you want to talk head-scratchers, it doesn’t get more mystifying than Florida, which was 6-1 at the start of December before winless Texas Southern rolled into Gainesville and left with a 15-point victory. Since that 6-1 start, the Gators are a mere 3-3 and have only managed to win games through the will of their defense. When Florida holds an opponent to 68 or less, the Gators are 9-0; they’re 0-3 when they fail, including the Texas Southern embarrassment. This is a team that’s built around denying good looks — which might or might not be a good thing against Alabama.

If there’s a problem with Alabama’s offense, it’s this: the Tide attempts way too many 3-point shots. Alabama is shooting 59 percent from inside the arc but just 32.8 percent from outside of it, yet more than 46 percent of the Tide’s attempts come from behind the arc. Alabama seems determined to play fast and shoot from behind the arc, which could be a problem against a Florida team that plays excellent 3-point defense but doesn’t do much inside of 20 feet.
The best strategy on paper for Alabama would be to get mid-range jumpers for Jaden Shackleford and Jahvon Quinerly, both of whom can create offense from anywhere on the floor. Whether Alabama takes that advice remains to be seen, as the Tide being 3-point heavy has been a staple of the Owens era.

When you have a center like Colin Castleton inside, you can usually dictate the way the game is played in the paint. Castleton has done a fine job inside for the Gators, scoring 14.8 points and grabbing 9.3 rebounds per game to pace the Gators in both categories. Where the Florida guards shine is on their steals, as they come up with nearly ten a game to bring an end to opposing possessions without a shot.

The Florida guards are also superb at defending the deep shot, but they’re even less effective than Alabama at hitting their own deep shots. Anthony Duruji and C.J. Felder are the only Florida players to hit more than 40 percent, but both only shoot about three attempts per game. Florida has to shoot better or deny Alabama baskets if it’s going to get the job done here.

Alabama will Cover If: The Tide can actually hit their shots. Alabama has the ability to put up some decent numbers from the floor, but they tend to take too many bad looks at the basket, figuring they’ll get enough looks that it won’t matter. However, to quote legendary baseball manager Lou Piniella, it does matter, and if the Tide doesn’t hit shots in this game, Castleton is likely to be there to prevent second chances.

Florida will Cover If: The Gators can force Alabama to either get frustrated and take too many bad shots or slow the Tide down to a style they’re not comfortable with. Florida’s guards won’t want to speed up Alabama because the Tide can handle pressure and actually like it. Instead, the Gators need to focus on defending the three as opposed to forcing mistakes.

If this total hits, there’s almost no way that Florida is winning this game. The Gators do not want to play that fast and are at a serious disadvantage if they do. Florida has to draw this out, which leads me to believe that the under is the way to play.

Neither team inspires confidence with how inconsistent they are, but one stat really jumps out at me: the road team is 20-5-1 ATS in the past 26 meetings. That tells me where I want to be for this one, as does the fact that Alabama can slow it down if it needs to in order to win.
I’m backing the mild upset here. Give me Alabama on the moneyline. Speaking of money, get up to $1000 in bets for FREE when you make your first deposit at Betnow Sportsbook! They offer the biggest sportsbook signup bonus on the web!