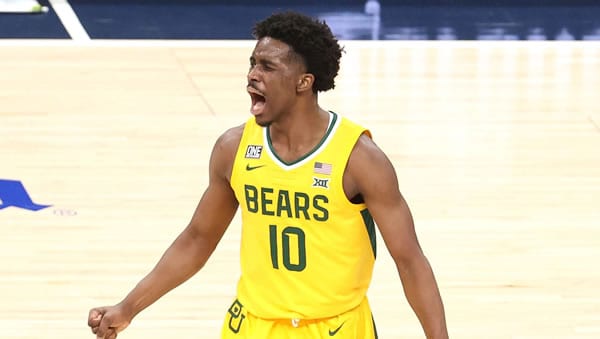 The old Southwest Conference stands proud, as two teams from the conference that dissolved in 1996 compete for a spot in the Final Four (and a potential meeting with a third school that was a member if Houston can beat Oregon State). Arkansas used to dominate that league and actually hasn’t been this deep in the tournament since it broke up, even if it did win its 1994 ti-tle as a member of the SEC. These Razorbacks have lived a charmed existence in the past two rounds, as they’ve managed to win both contests by two points each.

Baylor has looked more like the dominant team that it started the season as, and the Bears seem to finally be over their COVID pause. When it’s shooting the way it can, Baylor’s got the best group of guards in the country. But when the shots aren’t dropping, Baylor can be easily beaten, which almost happened against Villanova in the Sweet 16. The Bears were never domi-nant in the old Southwest Conference, but they’ve since become a monster in college basketball and are now in their third Elite Eight since 2010. But they’ve not yet been able to break through to the Final Four, as they’ve lost to Kentucky and Duke in previous trips to this game. With an-other historically great college basketball program opposing them this time, can the Bears fi-nally make it to the last four?

Arkansas got away with one against Oral Roberts, as the Razorbacks advanced despite hitting one 3-pointer for the entire game. With Justin Smith quiet and Moses Moody’s shots missing everything, Arkansas really didn’t do anything right in how to beat Oral Roberts.

But they’re still here for two reasons. First, they outrebounded the Golden Eagles in a big way for the second time this season, and second, Jalen Tate stepped up when his team needed it most. The Razorbacks weren’t getting reliable offense from anyone else, but they rebounded enough to get 72 points based on nothing but sheer volume, as they took 77 shots in the contest.

That’s probably not going to happen against Baylor, but the Hogs did show how they can win this game. They’ve got to get on the glass and dominate again, and they’ve got to take better shots. 37.7 percent won’t do the job against Baylor, even if Arkansas does rebound it well again. To get a win here, the Razorbacks have to step up the shooting and find Justin Smith inside.

More Picks: Get Dan’s Oregon State vs. Houston Pick Against the Spread >>>

Like the Razorbacks, the Bears shot poorly against Villanova from deep, which usually means disaster. When you have Jared Butler shooting 1-for-9 from deep and Mark Vital limited be-cause he jumped a scorer’s table and came down awkwardly on his leg, you’re not supposed to win that game.

Baylor did it anyway because it refused to let Villanova get comfortable from behind the 3-point arc, holding the Wildcats to just 3-for-17 from deep. Justin Moore never got comfortable against Davion Mitchell, and the rest of the Bears’ defense did more than enough to frustrate the Wildcats and swing the game in their favor.

Now, the question is, can they do it again to an opponent who proved it can win without the 3-pointer? Arkansas was able to get the job done inside the arc, and the main thing the Razor-backs do on defense is take away the mid-range and inside scoring. Baylor has the guards it needs to beat this defense, but if the Bears’ shooting is off again, they’re in trouble.

The Razorbacks can get the job done on the boards. Arkansas can’t have this game get to 75 shots apiece because Baylor will win that battle almost every time. To get a result in this game, the Razorbacks have to get enough rebounds to give themselves opportuni-ties while keeping Baylor from extending its own possessions. If the Razorbacks can keep Bay-lor’s shot total in the 60s, they have a good chance.

The Bears can start hitting from outside. Baylor has the significant ad-vantage on the perimeter, but with Smith down there and no real answer in the paint for him, the Bears have to make sure that they use it above all else. If Baylor isn’t scoring from outside, the Bears will have a tough time here.

Arkansas has been an under bettor’s dream during the tournament, as the Hogs have a reputa-tion of all offense and no defense. It’s completely undeserved because the Razorbacks actually have a top 10 defense and an offense that ranks only 47th in the nation. Once again, the total is likely set too high, and Arkansas should come in comfortably under this number with how it’s playing at both ends of the floor.

This seems like it’s a couple of points too high, as Arkansas has tended to play tight games throughout this tournament. Even the one comfortable win against Colgate was never really all that comfortable for Arkansas, as the Razorbacks had to work until the final few minutes.

Baylor has looked great so far in this tournament, but Arkansas has the talent and personnel to push them here and really make them sweat out the final few minutes. I think this gets decided in the final minute, so I want Arkansas and the points. Bet your Razorbacks/Bears pick FREE by taking advantage of a 100% REAL CASH bonus on your first deposit of $100 to $300 at MyBookie Sportsbook! (Must use bonus/promo code PREDICT100).