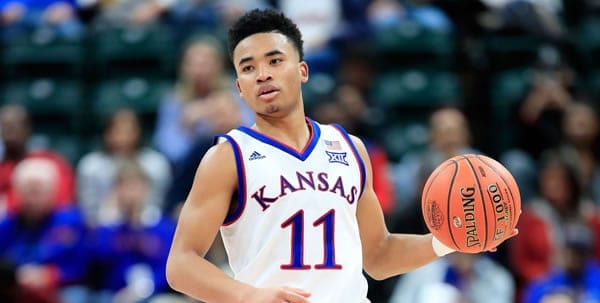 On one hand, there might not be a team playing better basketball right now than Auburn. The Tigers have won nine straight games, beat an excellent Tennessee team twice in a matter of weeks and have found themselves back in the round of 32 for the second consecutive year. On the other, what in the world was that down the stretch against New Mexico State? Auburn was in control for the entire second half and managed to play carelessly enough to nearly lose the game, getting bailed out when New Mexico State missed two free throws that could have won the game.

So which version of the Tigers will show up here? That depends on Bryce Brown and whether he’s able to get his shots against Kansas. Auburn needs him to be great, and he was just so-so against New Mexico State. That won’t work against the Jayhawks.

Will the real Kansas Jayhawks, please stand up? Kansas finally put everything together against Northeastern, hammering the Huskies on the glass and shooting the lights out for their first win in a while outside of either Lawrence or Kansas City. But we’ve seen this before from the Jayhawks: they play very well in one game and then play poorly in another. If the same Kansas team shows up in the second round, the Jayhawks will be in great shape. But if Kansas plays another languid first half, as it has far too often this year, it’s going to be a quick exit.

Momentum. Which team has it: Auburn after dominating the end of the season, or Kansas after dominating its first-round game? Sometimes, a team that hasn’t played all that well is able to own the momentum after one great game because it sees everything click, and that’s definitely what happened with the Jayhawks’ last game. But Auburn has played nine straight games of great basketball outside of the final five minutes against New Mexico State. As a whole, the Tigers look a heck of a lot more prepared for this moment than the Jayhawks do, and they’ve looked like the better team through most of March. If what they’ve done is indicative of the team they’re going to be moving forward, Auburn is going to have the edge.

The Tigers can slow down Dedric Lawson. Lawson has been the one consistent player all season for the Jayhawks, and when he’s on, as he was against Northeastern, Kansas’ offense becomes that much harder to stop. However, two weaknesses are present here. First, Kansas doesn’t have a consistent No. 2 scorer if Lawson doesn’t produce. Devon Dotson has done a decent job of providing help, but it’s uncertain if he can keep getting the job done if Lawson has a bad day. Second, Bill Self doesn’t trust his bench. Auburn needs to force Kansas to use more bodies than it wants in order to move on to the regionals.

The Jayhawks can keep Dotson going on offense. Dotson’s 18 points against Northeastern showed that he can get the job done just as well as Lawson can when the two both have shots available. Kansas needs to put both weapons to good use to match Auburn’s efficient offense on each trip down the field. The Jayhawks would also do well to set their pace and stick to it, as they play a faster game than Auburn does but can’t afford to overwhelm their thin bench.

Auburn is the hotter team, and Auburn is the deeper team. That leads me to think that Auburn is the better team and should come out of this with the cover. The Tigers have several scoring sources, they have depth, and they protect leads well with three players who shoot 80 percent or better from the foul line.

That tells me that the Tigers have the pieces they need to get a win here and go a step further than they did a year ago. Auburn got shredded by Clemson in the second round a year ago, but I think this will be a different story. Kansas, on the other hand, is just due for a poor game, and while I don’t think that comes here, I think Auburn is just better. I feel comfortable with the idea that the Tigers are the better play here.