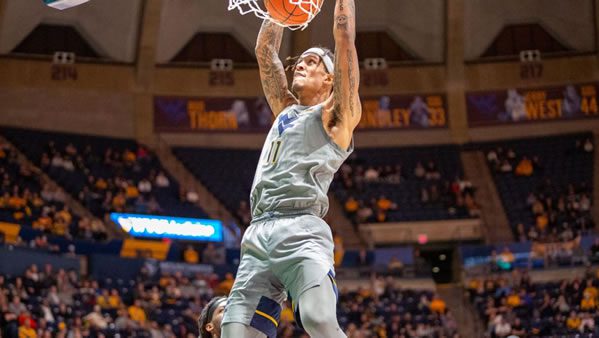 When you’ve got ESPN asking what’s wrong with you, it’s a sign that you’ve had a bad week. The Bears certainly had an awful week after losing to both Texas Tech and Oklahoma State at home. Baylor was supposed to have an easy time with both opponents, especially with Texas Tech coming in shorthanded for that game. Guess again, as the Bears shot horribly and became the first No. 1 team ever to lose two home games in the same week. Baylor has shown that it’s a little too dependent on forcing turnovers at the moment, because the Bears just are not hitting their shots. This game could be a bit of a tonic for Baylor, because West Virginia has a bit of a problem with making mistakes with the ball. But at the same time, the Mountaineers are undefeated in Morgantown this year and coming off an embarrassment in Lawrence against Kansas. Which team is going to be the hungrier of the team who needs it more?

When Baylor gets steals and upsets the other team’s rhythm, it’s almost impossible to hang with them. But when a team is able to hold on to the ball and actually get shots against the Bears, that’s when the Bears start to struggle. Baylor is a guard-heavy team, which means the Bears are built around hitting good shots and denying the deep shot. Baylor denies the deep shot well, as opponents shoot just 29.8 percent from behind the arc, but the shots aren’t falling at the moment from the outside, which has left Baylor very vulnerable. If you’ve been a bettor on the Bears in 2022, you know just how frustrating it’s been to place your money on Baylor. The Bears have just one cover in their past six contests and haven’t really had an easy win for bettors since their rout of Villanova on Dec. 12. LJ Cryer continues to be a top scorer for the Bears, but Adam Flagler and James Akinjo are struggling to connect on their shots at the moment, and when the Baylor guards aren’t hitting, they’re vulnerable.

This is the way Bob Huggins likes to coach: defense-first. The Mountaineers have been excellent on the defensive side of the ball for the most part, with the loss to Kansas being the rare night where the Mountaineers weren’t able to get the job done. Other than that night, though, West Virginia has been a tough out for offenses to deal with. Only Eastern Kentucky, which plays a fast-paced, hard-to-guard style, has managed to top 70 points in Morgantown, and only three other opponents have hit 70 points against West Virginia all year. Not coincidentally, the Mountaineers are 1-3 when their opponent has topped 70 points, with the only win coming in the survival against Eastern Kentucky. On offense, it’s not particularly pretty outside of Taz Sherman and Sean McNeil. Those two guards are almost always on the court and average almost half of the Mountaineers’ points, but if either has an off-day, there’s not a lot that the rest of the West Virginia attack can do. This is a team that needs to grind out games to get wins. Baylor will Cover If: The Bears remember how to shoot. Baylor has the talent to put up some huge numbers, but the Bears are not playing well at the moment and look nothing like the No. 1 team in the country. If Baylor can get back to the way that it normally plays, this spread will be an easy cash. West Virginia will Cover If: The Mountaineers can keep making life difficult for Baylor. The Bears have struggled against Texas Tech and Oklahoma State, two teams who are very defense-heavy and force jump-shooting teams to settle for bad looks. West Virginia has to do the same and avoid giving up transition baskets.

With Baylor not shooting well right now and West Virginia not shooting well all season, this looks like the under has got a great chance to cash. These teams tend to play high-scoring games against each other, but those were different teams than what we’ve got taking the court here.

Baylor is going to get this figured out eventually, but I do not think Morgantown is the place where the Bears find the solution to their woes. This is another strong defensive team on the docket for Baylor, and that’s the last thing the Bears need right now. Unfortunately for them, there simply are no defensive-optional teams in the Big 12. Other than a non-conference game at Alabama, the Bears won’t see another opponent ranked outside the top 50 in defense. That means this is likely to get worse before it gets better. Give me the Mountaineers.