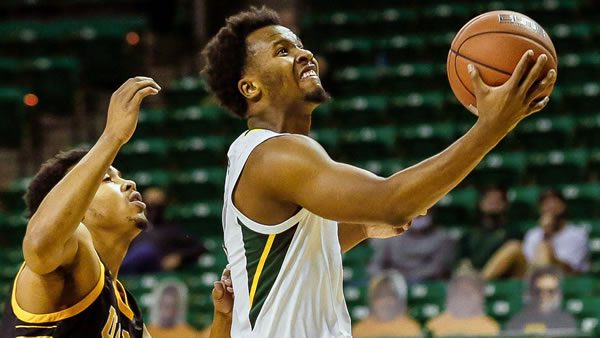 Is Iowa State really for real? The polls think so; the metrics don’t and the oddsmakers really don’t know what to think just yet. The Cyclones sit eighth in the nation, but aside from catching Iowa on an awful shooting night for the Hawkeyes, they really haven’t proven themselves against anyone. T.J. Otzelberger has won with the players who got Steve Prohm fired to this point, but the Cyclones have also played the 13th-weakest schedule in the nation to this point.

Beating Baylor would remove a lot of the doubts, as the defending national champions have picked up right where they left off despite what they lost to graduation. The Bears have made a lot of good teams look bad with their defense, and they’ve shown they’ve still got the offense needed to play at whatever pace they want. This is still an excellent basketball team that looks like it will be elite for a long time to come.

Baylor plays at a medium tempo, and the Bears have the ability to play whichever way they choose in large part to their abundance of guards. Scott Drew has always built the Bears around guard play, and LJ Cryer is the latest top guard to lead Baylor’s attack. The sophomore has shot 45.6 percent from deep and hits over half his shots overall, making him dangerous from anywhere on the court. The Bears’ assist-to-turnover ratio is 1.67, showing that this team doesn’t make mistakes. Plus, unlike most guard-heavy teams, this team doesn’t have problems grabbing rebounds.

Where do the Bears have a weakness? Foul shooting. Baylor only shoots 65 percent from the stripe, so if a team is actually able to stay with Baylor for 40 minutes, the Bears don’t really have a way to finish them off. Baylor’s strength of being able to bury teams early can become its weakness if a team can avoid the big run that cuts off their chances to win.

On the stat sheet, Iowa State really isn’t all that impressive. The Cyclones don’t shoot all that well, they don’t rebound it very well on offense and they make too many mistakes with the basketball. But they make up for all of that by placing a heavy emphasis on defense, as they limit teams to one shot and usually don’t allow it to be a good one. Iowa State ranks ninth in the nation in opposing field goal percentage and third against the 3-pointer. The Cyclones have held teams to 56 points per game, and they’ve only let Kennesaw State top 70 points on them this season.

That said, Iowa State hasn’t exactly played a great schedule, so this defense hasn’t really shown that it can do the job against a great offense. Whether Iowa State can defend Baylor properly will decide if they have a chance in this game.

Baylor will Cover If: The Bears can find the open spots in the Iowa State defense and take advantage of the opportunities that they get. Baylor’s offense has done the job against very good teams, and the Bears shouldn’t really have too many problems finding points, even against Iowa State.

Iowa State will Cover If: The Cyclones can ride a little Hilton Magic to lock down the Bears. Iowa State is not going to win this game without playing great defense, so the last thing they want is for the Bears to get rolling from anywhere on the court. Iowa State needs to use its crowd to pressure Baylor.

With how Iowa State likes to play, I can’t see the Cyclones putting up points in this battle. This is a team that scored 47 on Jackson State, and the Tigers are not exactly known as a great defensive squad. I think 57 points is a little too high for Iowa State to hit in this one.

I don’t buy it on Iowa State. I think the Cyclones are the product of a soft schedule and have played far too many weak opponents to play with a team of Baylor’s caliber. The Bears have rolled through a slate that includes Villanova and Oregon, and Iowa State simply has not played anyone close to that level.

This spread isn’t happening without some Hilton Magic. Give me the Bears.