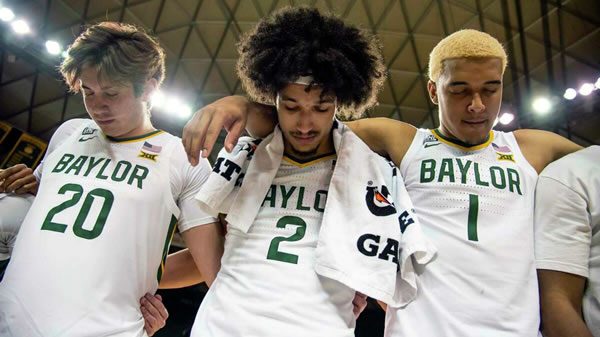 Weeks don’t come much bigger than this for Texas. The Longhorns will close out the regular season with Baylor and Kansas, giving them two golden opportunities to build their profile up before the Big 12 tournament gets underway. Right now, Texas is sitting on the No. 4 or No. 5 seed line, and a pair of wins here could be the difference between a tough first-round matchup and a much easier path to the tournament’s second weekend. Given that Texas fell as a No. 3 seed to an unheralded Abilene Christian last season, getting off the No. 4 line would certainly be in their best interests.

However, Baylor might have something to say about that. The Bears probably aren’t winning the Big 12’s regular-season title, as Kansas would seal up first place by sweeping TCU, but they can still lock up the No. 2 seed in the conference and likely earn themselves a No. 1 seed in the NCAA tournament. However, Baylor has been pretty vulnerable on the road as of late. The Bears are coming off a win in their most recent game at Oklahoma State, but only just, as a shot clock violation against the Cowboys was the only thing that saved them from defeat in regulation. The Bears have survived everything the injury bug has thrown at them to this point; can they find a way to keep things rolling and close out the regular season strong?

For Baylor, it has to be about two things: rebounding and defense. The Bears are not deep, and they do not shoot the 3-pointer all that well, and both issues displayed themselves pretty prominently in the win over Kansas. Baylor fell behind by 13 in the game’s first few minutes because they initially couldn’t keep up with Kansas’ shooters, and it wasn’t until they got the ball inside and started hitting some close shots that they began to climb back in the game.

But the Bears do get rebounding from all over the floor, as their leading rebounder against the Jayhawks was guard Matthew Mayer. Usually, when your guard leads the team in rebounding, you’ve had a bad day, but Mayer grabbed 12 boards in that game, and Baylor was able to limit Kansas just enough to pull away. The other key piece of the puzzle was holding the Jayhawks to 34.3 percent from the floor, as Kansas took more than enough shots to win but wasn’t hitting much of anything after the first few minutes. This game is likely to feature far fewer shots than that game did, so defense is going to be even more critical for the Bears. Getting a repeat performance from Adam Flagler, who scored 20 points on the Longhorns in the first game, wouldn’t hurt either.

On the one hand, Texas did its job in the first meeting of not allowing Baylor to get many looks at the hoop. On the other, the Bears shot 50% for the game on their 52 attempts from the floor, so the slow pace backfired on the Longhorns when they were the ones who only shot 32.8% for the game.

A repeat of that performance isn’t likely to work because the Longhorn defense did not play well at all last week and only managed to pick up wins because of the offense getting the job done. Texas should have lost to West Virginia after turning the ball over 16 times, but the Longhorns survived because they shot 63.4% from the floor and won an 82-81 contest. However, that’s not Texas basketball by any stretch of the imagination, and it only worked because the opponent was a poor West Virginia squad. If the Longhorns try to win that way again against Baylor, they’re likely in deep trouble

Baylor will Cover If: The Bears can lock down on Texas and force them to look for alternative shooters on each play. No Longhorn starter got to double digits last time, in large part because Baylor made sure there weren’t many open looks at the basket. The Bears have to make sure they’re doing the same things on defense here.

Texas will Cover If: The Longhorns can hold onto the ball and step up their play on defense. It’s weird saying that a Chris Beard team needs to play better on defense, but that’s the situation after two rather poor showings from the Longhorns on that side of the ball. Texas needs to get back to who it wants to be to succeed this week.

Based on what we’ve seen the past week, I’m not sure Texas is going to be able to slow Baylor down. I’ve learned the hard way not to bet against Baylor’s offense, so I think this total is just barely going to hit the number.

After all that we’ve discussed here, it seems that we’re heading for an easy Baylor cash, right? After all, the Longhorns aren’t playing well on defense and had no answers for Baylor last time, so how is it going to be different this time?

Well, Texas’ offense plays a lot better at home than it does on the road. The Longhorns might not prefer to play this way, but it did the job against Kansas, and they’ve been almost impossible to beat in Austin this year. When you’re getting points with a team that’s as successful at home as Texas is, you’ve got to take them. Give me the Longhorns and the points.

With college basketball conference tournaments on tap, there’s going to be TONS of wagering opportunities! You might want to consider beefing up your bankroll with a 100% real cash bonus on your first deposit of $100 to $1000 at BetNow Sportsbook! It’s the biggest online sportsbook bonus from a legit bookie!