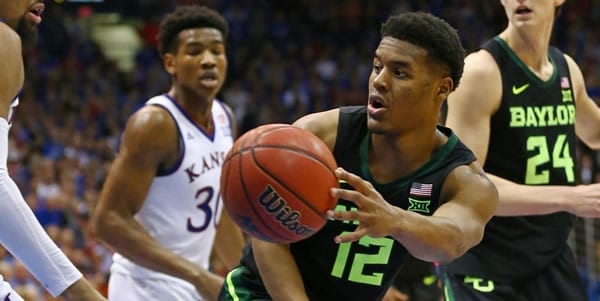 This wasn’t supposed to happen, but suddenly, Kansas State has momentum. The Wildcats were in the midst of finishing out their worst season in school history but managed to keep their year going for at least one more day by handling TCU in their first game at the Big 12 tournament. Truth be told, Kansas State isn’t as bad as its record suggests and can play some fairly solid defense when everything is working the way it should. When the Wildcats hosted Iowa State, they held the Cyclones to just 38 percent from the floor, and only two made shots from the perimeter, which made it relatively easy for them to finally snap a long skid.

The problem for K-State is that the Wildcats just don’t put up a lot of points. The win over Iowa State was only the second time in 18 conference games (now 19, counting TCU in the tournament) that the Wildcats topped the 63-point mark. Most nights, they come in safely under that, which leads to a competitive loss but a loss nonetheless. K-State has a pair of genuine scorers in Xavier Sneed and Cartier Diarra, but beyond those two, there isn’t much there.

There’s finishing strong, and there’s what happened with Baylor down the stretch. The Bears were not the same team in the last few games of the season, and that’s in large part because the defense has let them down as of late. Baylor’s defense played fine against Kansas, but since that game, it’s given up 66, 75, 68, and 76 points, staggering numbers for a team that held 10 of its first 13 league foes to less than 60 points. In recent weeks, Baylor’s rebounding has fallen by the wayside, and the defending has fallen along with it. One of the problems is that senior Freddie Gillespie isn’t himself at the moment, scoring just 10 points in the past two games combined and grabbing only six rebounds against West Virginia. If the Bears are going to get anything going at this tournament, he has to be more like himself.

Rest. It’s never an easy thing to figure out whether it’s better to play the first game of a conference tournament or sit it out and get the extra bit of rest while your opponent has to play opening night. In truth, it’s probably close to a wash. But it’s tough to say because, for a team like Kansas State, there’s a good chance that the Wildcats could run out of energy in the second half of their game with Baylor after gutting out a tough one against TCU. The reality is that Baylor has proven itself a stronger, more capable team than K-State, which is why the Bears had the bye in the first place. Baylor is likely to be the fresher team as well, and that could lead the Bears to pull away and cruise to a comfortable victory if their game plan goes according to plan.

The Wildcats can cut down on their turnovers. When the teams met in Waco, Kansas State coughed up the ball 18 times, which made it next to impossible for the Wildcats to overcome the rest of the deficiencies they showed that day. To get the cover, Kansas State has to give itself a chance, and that means that it has not to beat itself. That means taking care of the basketball.

The Bears can bludgeon the Wildcats on the glass. Baylor has been a strong rebounding team all season, but Kansas State was actually able to win the rebounding battle last time the teams met in Waco. It didn’t matter because the Bears forced 18 turnovers and shot the ball so well, but if Kansas State is shooting the ball poorly, there will be rebounds. Baylor needs to make sure that it’s the one grabbing them.

It’s tough to make any predictions right now given the number of factors in the sports world that make you wonder whether any games will be played at all. For now, the teams are still scheduled to play, and based on what they’ve shown as of late; I have to go with Kansas State here. The Wildcats are again playing with some enthusiasm and have managed to keep themselves in most games that they’ve played. Meanwhile, the Bears are leaking oil, and if we actually get to play an NCAA tournament, they look likely to be dismissed on the first weekend of it.

For the time being, I’m just hoping that everyone stays safe and that we get to enjoy basketball this month, even if it is behind closed doors. As for the game, I’m taking the Wildcats for the cover in a game I expect them to lose by a small margin.