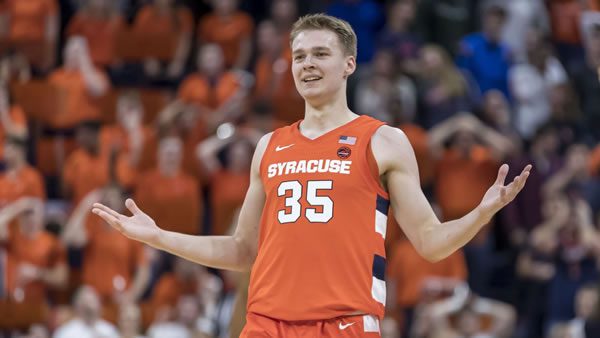 There are two big questions concerning this matchup: how good are the Orange, and how rusty will these teams be after two weeks away from the floor? Both had games wiped out last week because of Omicron, meaning neither the Bears nor the Orange has played since Dec. 11. That’s not that big of an adjustment because both teams traditionally take some time off around this time for finals, but taking this much time can have an effect.

The other question involves Syracuse and its record. Usually, the Orange are nowhere near as good as their December record suggests because Syracuse usually doesn’t leave New York unless it has to and plays a bunch of soft opponents in the process. However, this year, Syracuse has actually challenged itself, facing six Power 6 opponents and Virginia Commonwealth. That’s left the Orange with a middling record, but it might have them battle-tested for the ACC. But they’ll need to show some of that mettle against Brown, an up-and-coming Ivy League squad that gave North Carolina and Colorado all they wanted before falling just short of a win.

Defense and guard play is why Brown is likely to be very good in the next year or two, as this is a team with a young backcourt that seems to be well on its way to challenging Yale for the Ivy League. The Bears boast five seniors, but only two of them (Tamenang Choh and Jaylan Gainey) start, which suggests it’s not a question of if Brown will soon make its first NCAA appearance since 1986 (when it lost by 49 to Syracuse), but when.

The Bears are speeding up the timetable in part because of the play of guards Kino Lilly and Dan Friday, both of whom can score and create their own shots. Lilly, a freshman, leads the Bears in both points and assists and has proven to be the cog that makes this offense go. The one issue the Bears have is that they are prone to turnovers, as they cough it up nearly 14 times a game. That’s not unusual for a young team, but against the wrong opponent, it can easily be their undoing.

When a ball goes in the air from a Syracuse player, there’s about a 50 percent chance the shooter was named Boeheim. Buddy Boeheim was already expected to be the main scorer on this year’s squad after last year, but he’s gotten some unexpected help from a familiar source: older brother Jimmy, who transferred to Syracuse in order to use his final year of eligibility after spending four years at Cornell. Jimmy Boeheim’s points have hid the fact that even though he’s the leading scorer, Buddy really isn’t shooting all that well, hitting just 38 percent from the field. That said, this might be a tough assignment for both Boeheims, as Buddy isn’t shooting it as well as in past years, and Jimmy is facing an opponent that knows him well and has stopped him reasonably consistently. Only as a sophomore did Jimmy Boeheim have a good game against Brown while he was with Cornell. Otherwise, the Bears have successfully slowed him down and kept him from taking over. If the Boeheims cant get it done, the job is likely to fall to the interior guys, as Cole Swider and Jesse Edwards should have plenty of options in the paint.

Brown will Cover If: The Bears can keep the Boeheims off balance. Brown has prided itself on great defense all season, and Syracuse gets a lot of its scoring from its starting five. If even one part of that isn’t working, the Orange are beatable.

Syracuse will Cover If: The Orange fluster the Bears into turnovers and pick up some easy baskets. Brown will turn it over under pressure, and Syracuse knows how to create solid defensive pressure. The Orange need to win the backcourt battle to cover.

Brown is a chameleon, able to play at whatever speed its opponent desires. Syracuse is likely to push the tempo a bit, and Brown is coming off four straight over games anyway. I think both teams should find their way to the 70s in this one.

I don’t think Brown’s going to win, but I don’t see a blowout here either. I want the Bears plus the points.