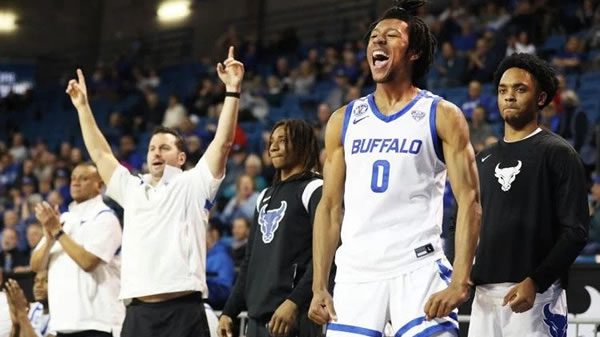 The Buffalo Bulls will look to continue their winning streak against the Cards that reached five games last season. The oddsmakers think it ends here, making Ball State a -5.5 point spread favorite with a total line of 152.5. The tip-off for the game is 7:00 PM ET and can be watched on ESPN+.

The college basketball board opened with Ball State, a -5 spread favorite, and hit -6 on a few boards before being bought back to -5.5. The O/U line was originally listed as high as -153.5 and has now settled in at 152.5.

Buffalo lost to Toledo in their last game by a score of 86-77. But because the Bulls were +5 point underdogs, they finished with an ATS win. The combined 163 points did not surpass the 167 total line.

Ball State most recently fell to Kent State (86-65). Not only did the Cardinals lose straight-up, but they picked up an ATS defeat as +8 point underdogs. The combined 151 points finished above the 139 total line.

Buffalo
Over their last five games, Buffalo has a straight-up record of 2-3 while going 2-3 vs. the spread. Over this stretch, the Bulls’ offense averages 83.0 points per game while hitting 47.3% of their shots from the field. On the defensive end of the floor, they have allowed opponents to shoot 44.2% from the field while allowing 79.4 points per contest.

Ball State
In their previous five contests, Ball State is 3-2 straight-up and 2-3 vs. the spread. In these five games, they have a scoring average of 70.4 points per game on a shooting percentage of 42.2%. Defensively, they allow teams to hit 43.2% of their shots while giving up 71.2 points per game.

This season, the combined power rating of Buffalo’s opponents comes in at 72.4. On the other side, Ball State’s combined opponent power rating sits at 69.9.

How Does Buffalo Fare On The Road?

For the season, the Bulls have played seven road games and have a record of 1-6. In these contests, Buffalo is 4-3 vs. the spread. Offensively, they have averaged 74.6 points per game on a shooting percentage of 44.9%. On defense, the Bulls allow 85.9 points per contest when playing away from home. So far, opposing teams have a field goal percentage of 48.6% in these games.

How Does Ball State Fare At Home?

For the season, Buffalo is averaging 79.9 points per game (16th) while posting an overall field goal percentage of 45.5%. In today’s game, they will be matched up against a Ball State defense that has allowed an average of 68.2 points per contest. This year, opponents have hit 42.4% of their shots vs. Ball State. On the other side, the Ball State Cardinals are coming into the game averaging 74.3 points per game on a shooting percentage of 43.7%. The Cardinals will be facing a defensive unit allowing an average of 77.6 points per contest. So far, teams have hit 44.3% of their shots vs. the Bulls.

From beyond the arc, Buffalo has a shooting percentage of 34.2% while ranking 209th in attempts per game. The Bulls will be facing a Ball State defense that has a 3-point field goal shooting percentage allowed of 33.8%. Ball State enters the game having hit 35.7% of their looks from deep while averaging 9.0 made 3’s per game. On the other end, Buffalo has allowed opponents to hit 34.0% of their shots from beyond the arc.

I like the over here. Buffalo average 81.7 points in the conference, and while at times they can turn over the ball, steals are not a strength of the Cards, just 6.11 per game. The Bulls don’t shoot quite as well but are better on the offensive glass. Buffalo’s guard Zid Powell will have to stay out of foul trouble, and if he gets his minutes, I think the Bulls can hit the mid 70’s or higher. Ball State is one of the best teams in getting to the line, and in the paint defense, including fouls, is a trouble spot for Buffalo. Take the Over 152.5