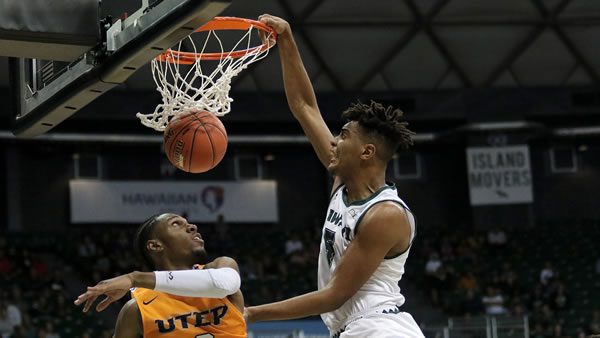 Welcome to late night on the islands, as the usual football trick of ESPN moves over to the hardwood with a Big West matchup that’s a little more intriguing than you might think. These teams are playing for the second bye in the Big West tournament, as neither is likely to catch Long Beach (especially after both just lost to the Beach last time out) for first place, but neither is anywhere close to the at-large conversation.

Hawaii was sitting in first place up until its recent slide, as the Rainbow Warriors have dropped three straight and are now sitting in a third-place tie with UC Irvine. Fullerton has taken advantage of the Hawaii lapse to move into second, but the Titans have to prove that they can get the job done on the road. Fullerton has dropped two straight away from home, and the Titans face their next three games on the road before closing the year with three home contests and a game at UC San Diego that doesn’t count in the Big West standings. The opportunity is there for Fullerton to earn the bye, but that likely only happens with a win in Honolulu.

There’s one very large difference between the Titan team that lost by 23 to Hawaii last season and this one: E.J. Anosike. The senior-plus planned to finish his career at Tennessee after becoming a grad transfer from Sacred Heart, but he never found his place in Knoxville and ultimately chose to return to small-conference basketball across the country.

It’s paid off in a big way for both Anosike and the Titans, as he’s likely to win player of the year because of both his scoring and his rebounding. Against Cal Poly, Anosike went for 22 points and 12 rebounds, almost single-handedly making the difference in a one-point victory. What’s more, Anosike is starting to get some help on the perimeter from Jalen Harris, who barely played in the non-conference but has really come on strong in Big West play. Harris has hit double figures in eight of the Titans’ nine league games and is shooting 45 percent from behind the arc, which could be huge if he can find space against the Hawaii defense.

It’s not hard to see why Hawaii is struggling: the Rainbow Warriors can’t hit their shots from inside the perimeter. Hawaii has shot 44% or worse from the field in each of its past three contests, and the Rainbow Warriors haven’t hit more than half of their shots from inside 20 feet in any of those games. When you’re not shooting well inside the perimeter, you’re not going to win a lot of games, especially when you’re also losing the turnover battle.

Hawaii continues to hit about 36% of its shots from deep, so the Rainbow Warriors really have two choices: start hitting more frequently from deep or start taking better shots from inside the arc. Considering that Noel Coleman shot 57 percent from behind the arc in a 22-point effort in the loss to Long Beach, hitting more deep shots is probably not a viable strategy. This is going to take better shooting from someone other than Coleman and Jerome Desrosiers to find a solution.

Cal State Fullerton will Cover If: The Titans can use Anosike to get someone in foul trouble. Hawaii is not deep by anyone’s imagination, and the Rainbow Warriors would prefer to use a six-man rotation if at all possible. Hawaii has the height to try to deal with Anosike in the person of Mate Colina, but the Rainbow Warriors would prefer to use Desrosiers and Bernardo da Silva if they can. Desrosiers has been in foul trouble in two of the three defeats, and if Anosike can force some lineup changes, this is Fullerton’s game to lose.

Hawaii will Cover If: The Rainbow Warriors can find a third scorer. Coleman and Desrosiers are reliable scoring options, but Hawaii has to get more from da Silva, Kamaka Hepa, or JoVon McClanahan if it’s going to get back on track. A two-man team isn’t winning at any level.

With Hawaii struggling to score and Fullerton very weak on the perimeter, don’t look for a lot of points here unless Fullerton gets to the line often. The Titans will get their points two at a time, not three, which lends itself to under ball.

Hawaii is heading in the wrong direction and doesn’t really seem to have the pieces it needs to get good results against the Big West’s stronger teams. I don’t see them bouncing back against a Fullerton team that can really get some separation with a win. Give me the Titans. Bet your Cal State Fullerton/Hawaii pick and your Super Bowl Sunday picks for FREE by taking advantage of a 100% REAL CASH bonus on your first deposit of $100 to $300 at Betnow Sportsbook!