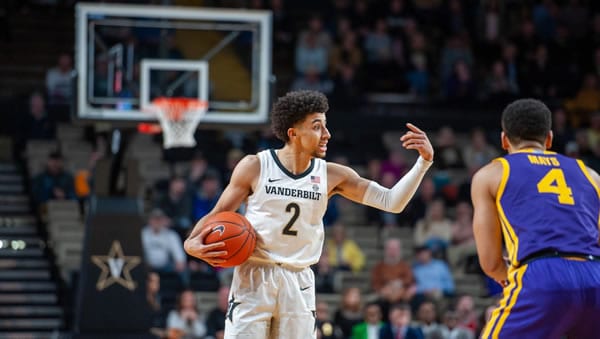 The Gators return to the floor in what will surely be an emotional game for them, as they take the court for the first time since the collapse of Keyontae Johnson. Johnson, Florida’s leading scorer, found his life in grave danger when he collapsed on the court in Tallahassee because of a heart inflammation that might have been aggravated by COVID, and he’s out of action indefinitely. He’s returned to the floor as a student-coach, but he’s almost certainly out for the season.

Without Johnson, the Gators open their SEC schedule against a Vanderbilt squad that hasn’t really found itself yet. The Commodores seem to have a genuine star in Scotty Pippen Jr., but this is also a team that has a record of 3-33 over the past two seasons against SEC competition. Vanderbilt did win two of its final three SEC games a year ago, but the Commodores haven’t exactly covered themselves in glory this season, losing to Richmond and Davidson. Can Vanderbilt catch an emotionally exhausted Florida off-guard in the SEC opener?

Losing Johnson likely drastically changes the equation for Florida, which had been able to count on double-digits on a nightly basis from the junior. Florida still does have three quality guards who average double digits in Tre Mann, Scottie Lewis, and Noah Locke, but there’s no guarantee as to whether the Gators are truly ready to play without such an important piece of the lineup.

Not only was Johnson the Gators’ leading scorer, but he was also the most accurate shooter Florida had at 64.7 percent. None of the other Florida starters shoot above 52 percent, which means that Colin Castleton and Omar Payne have to get better on the boards. If Florida is missing a lot of shots, its weak rebounding numbers will be a real problem.

Vanderbilt depends on two things above all others: the scoring from Scotty Pippen Jr. and the rebounding of Dylan Disu. Vanderbilt is fairly balanced outside of Pippen, but there’s no doubt that he’s taking much more after Michael Jordan than he is his father, leading the Commodores with 23.3 points per game. Disu is the only other Vanderbilt player in double figures, so if Pippen isn’t scoring, it’s hard for the Commodores to stay competitive.

That could be a problem against Florida because the one big weakness Pippen has is his tendency to turn the ball over. He’s averaging 3.7 turnovers per game, which could put the Commodores in peril against a defense that averages 8.5 steals per game. Vanderbilt doesn’t play fast enough to keep pace with Florida if they’re turning the ball over, so the Commodores have to make sure they’re moving things around well and taking good shots. Empty possessions cannot be a thing if Vanderbilt plans to get a win.

Memorial Gym. Vanderbilt might be the one team in the nation that actually has a legitimate home court advantage even with games played behind closed doors. That’s because the bizarre layout of Memorial Gym is completely different compared to anything that Florida or any other team deals with regularly. The benches are behind the baskets as opposed to on the sidelines, so it’s a totally different shooting look than visiting players are used to seeing.

There’s a reason that Florida is only a six-point favorite in this game, and it’s because it’s darn hard to shoot in Memorial Gym. Last year, Florida managed to scratch out a 61-55 win against Vanderbilt, but the 116-point total was the second-lowest of the season for the Gators.

The Gators can throw Pippen off his game and force him into either turnovers or bad shots. Pippen lost the handle on the ball four times last year when the teams met in Nashville, and if Florida can bother him again, they’ll remove a large chunk of Vanderbilt’s attack. Florida runs a three and sometimes four-guard lineup, which gives the Gators the quickness they need to guard Pippen. Whether they use it well is the question.

Vanderbilt will Cover if:

The Commodores can get Disu to win the battle on the boards. Florida does not have the rebounders necessary to withstand a bad shooting day, and Disu averages a robust nine boards a game. If he’s holding Florida to one shot per trip, the Commodores will be in control.

I have to wonder where Florida’s heads are going to be after losing Johnson. The Gators haven’t played since that game and are yet to take the court without him, and it’s certainly a question as to whether they’ve had enough time to adjust to both playing without Johnson and shooting in Memorial Gym.

This is a game where I want to wait and live bet, as I don’t love either side at the current line. One thing I do really like is the under, as seven of the past eight meetings between the teams in Nashville have seen fewer than 140 points. If I have to make a spread pick, I’ll lay the six with the Gators, but I’d rather wait a few minutes into the first half to allow the Gators to adjust to Memorial Gym and see if I can get Florida for a cheaper price. Bet your college basketball picks FREE this weekend by scoring a 100% REAL CASH bonus on your first deposit of $100 to $500 at GTBets Sportsbook!