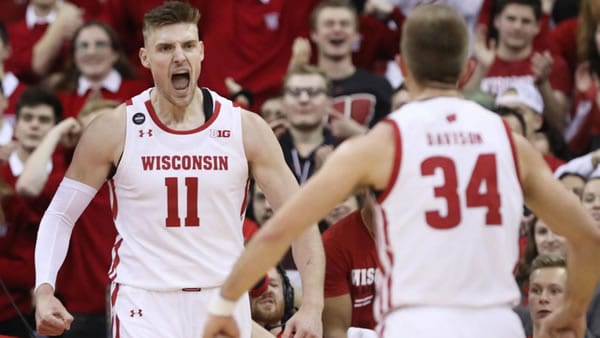 Could the Badgers be the new team to beat in a loaded Big Ten? Wisconsin has looked excellent this season outside of stubbing its toe at in-state rival Marquette, winning each of its past four games by nine or more. On the other hand, Maryland is just trying to keep its head above water after its third loss in four games. The Terrapins have losses to Purdue and Rutgers in league play, and their best win of the season to date is over Old Dominion.

With the Big Ten looking like it’s “far and away” the best league in the country this year, an 0-3 start in this league could bury Maryland before it has a chance to become competitive. But avoiding 0-3 in the Big Ten would require Maryland to do something it hasn’t done since 2016: win in Madison. The Terrapins came agonizingly close last year, falling by a 56-54 margin. Can they go a few points better this year?

Maryland shoots the ball pretty well as a team and has a better shooting percentage than Wisconsin, but you’d never know it from the fact that the Terrapins have shot under 40 percent in two of their three defeats. Clemson and Rutgers both shut down the Maryland shooters, in large part because they were willing to let Donta Scott get his points but weren’t willing to allow the rest of the Terrapins to hurt them.

Scott actually isn’t the leading scorer for Maryland (that’s Eric Ayala), but he’s the one player who’s consistent enough to get his points no matter what the defense tries to do. On the other hand, Ayala can be slowed down and eventually stopped, and the Terrapins haven’t really gotten much out of him when they’ve faced a quality opponent. In the three losses, Ayala has averaged just 10 points per game in the Terrapins’ three losses, and that can’t continue for a team that doesn’t rebound well and needs to have its leading scorer actually step up and lead.

Don’t expect Wisconsin’s defense to get shredded as easily as Michigan State did from the 3-point arc in the Badgers’ most recent outing. Most teams aren’t going to shoot above 70 percent from the arc, and the fact that Wisconsin was still able to get the win showed a lot about the Badgers. So did the fact that D’Mitrik Trice was the one who got the Badgers going. He’s averaging 13 points per game now, but most of that came from the previous game against Michigan State, where he scored 29 points and almost single-handedly kept Wisconsin in the game despite the Spartans’ attack.

A more typical Wisconsin game will see the Badgers win with a combination of accurate shooting, strong defense, and not making small mistakes. Wisconsin only turns the ball over 8.3 times per game, and five of the Badgers’ top six scorers shoot 40 percent or better from beyond the arc. When those elements are combined, it’s tough to beat Wisconsin.

Patience. These teams are used to playing a slow-paced style, and in fact, none of their nine Big Ten meetings have ever seen more than 131 points scored. Last year’s matchup featured just 110, and even though Wisconsin hung 85 on Michigan State, that was the exception for the Badgers, not the rule. Wisconsin prefers to slow things down and wait for the right shot, something it couldn’t really do against Michigan State’s quick tempo and explosive offense.

Maryland will be much more willing to slow things down and play Wisconsin’s game because the Terrapins don’t play much faster than the Badgers do. Because of the similar styles, every possession is going to be magnified because there probably won’t be a lot of points in this contest. Rushing shots is an almost-certain way to lose this one.

The Terrapins can actually hit a few shots. Maryland couldn’t hit much of anything against either Clemson or Rutgers, resulting in efforts of 60 points or less. The offense was better at Purdue but still wasn’t all that great against the Boilers. Wisconsin is likely the best defense Maryland has seen all season, so making a few early shots will be critical to building confidence and keeping pace.

The Badgers can get a lead at the 10-minute mark of the second half. Wisconsin is excellent at free throw shooting and doesn’t miss often, making it very difficult for opponents to come back against the Badgers once they get ahead. If Wisconsin can make sure that it’s ahead after 30 minutes of action, Maryland likely won’t shoot it well enough to keep pace from there.

The most obvious thing to me here is the under, which is six points higher than any meeting these teams have had as Big Ten rivals (the teams went over it twice when Maryland was in the ACC and was coached by Gary Williams, who preferred a much faster style than current Maryland coach Mark Turgeon). I can’t see this game being a high-scoring battle, so I really like the under here.

As for the spread, Maryland’s done a fine job staying close with its opposition, but the Terrapins really look like they’re overmatched this season in a loaded Big Ten. The loss to Purdue was better, but still wasn’t a win, and now they’re facing a team that looks like it might be the best the league has to offer.

I wish the line was a bit lower, but I’ll take the Badgers here despite the large line. Get home late and miss out on betting the spread or total? NO WORRIES! Jump into the action ANY TIME by using the best live-in-game-betting platform on the planet at Bovada Sportsbook! They’ll give you a 50% signup bonus (real cash; not a crappy match play) AND rebates on your action; win, lose or draw! Go there now to start enjoying the thrill of live betting!