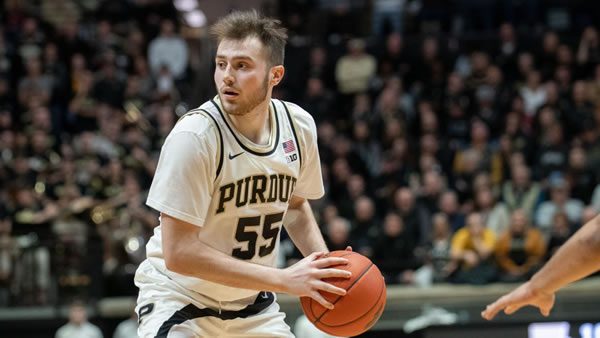 The Nebraska Cornhuskers visit the Purdue Boilermakers for the regular season series finale. Nebraska kept it close in the previous one at home, but this is on the road in West Lafayette. Purdue is a huge -14.5 favorite this time around, with a total line of 131.5. Tip-off for tonight’s game at the Mackay Arena is set for 7:00 PM ET.

This line opened at -15.5 at some betting sites and has fallen to as low as -14.5 at sportsbooks that take a high percentage of square action. The total has seen a slight increase moving from 131 and an early line of 131 to a consensus of 132.5 points on our odds board.

Nebraska lost to Illinois in their last game by a score of 76-50. But because the Cornhuskers were +3.5 point underdogs, they finished with an ATS win. The combined 126 points did not surpass the 139 total line.

Purdue picked up a victory over Penn State by a score of 76-63. Heading into the game, the Boilermakers were favored to win, with a point spread of -5. The combined 139 points finished above the 135.5 total line.

Nebraska
Over their last five games, Nebraska has a straight-up record of 3-2 while going 1-4 vs. the spread. Over this stretch, the Cornhuskers offense averages 65.6 points per game while hitting 44.6% of their shots from the field. On the defensive end of the floor, they have allowed opponents to shoot 40.4% from the field while allowing 68.8 points per contest.

Purdue
In their previous five contests, Purdue is 4-1 straight-up and 2-3 vs. the spread. In these five games, they have a scoring average of 73.4 points per game on a shooting percentage of 48.6%. Defensively, they allow teams to hit 42.6% of their shots while giving up 59.8 points per game.

This season, the combined power rating of Nebraska’s opponents comes in at 78.5. On the other side, Purdue’s combined opponent power rating sits at 80.8.

For the season, the Cornhuskers have played eight road games and have a record of 2-6. In these contests, Nebraska is 1-7 vs. the spread. Offensively, they have averaged 61.0 points per game on a shooting percentage of 41.2%. On defense, the Cornhuskers allow 71.2 points per contest when playing away from home. So far, opposing teams have a field goal percentage of 44.9% in these games.

How Does Purdue Fare At Home?

In their ten games at home, Purdue has a 1-9 record vs. the spread while going 9-1 straight-up. On offense, the Boilermakers are shooting 45.7% on their home floor, leading to 76.0 points per game. Defensively, opponents are shooting 39.4% in these contests. The Purdue defense is allowing 58.7 points per game at home.

For the season, Nebraska is averaging 73.3 points per game (136th) while posting an overall field goal percentage of 44.4%. In today’s game, they will be matched up against a Purdue defense that has allowed an average of 61.5 points per contest. This year, opponents have hit 39.8% of their shots vs. Purdue. On the other side, the Purdue Boilermakers are coming into the game averaging 79.8 points per game on a shooting percentage of 49.3%. The Boilermakers will be facing a defensive unit allowing an average of 66.8 points per contest. So far, teams have hit 42.2% of their shots vs. the Cornhuskers.

From beyond the arc, Nebraska has a shooting percentage of 32.0% while ranking 366th in attempts per game. The Cornhuskers will be facing a Purdue defense that has a 3-point field goal shooting percentage allowed of 29.7%. Purdue enters the game having hit 39.1% of their looks from deep while averaging 8.74 made 3’s per game. On the other end, Nebraska has allowed opponents to hit 32.4% of their shots from beyond the arc.

Years ago, I made a rule for myself to never lay more than six points in college basketball, and for the most part, I have stuck to that. Every once in a while, I have been swayed to the wild side and laid double-digit points, and it hasn’t turned out well (psst, I like Purdue but won’t lay the number). So tonight, I’m on the total. The Boilermakers have allowed just 61.5 points per game overall this season and an even stingier 58.7 at home. On the campaign, they have held the opposition to 11.4 points below their seasonal average, and this wasn’t skewed by beating up overmatched, offensively challenged clubs. Gonzaga (83.3 PPG), Marquette (83.1), and West Virginia (78.3 PPG) were all held to 70 or fewer points. These two played in Evanston earlier this season, with the game tied 56 -56 at the end of regulation. The Cornhuskers will be without Juwan Gary, and I think that hurts them as much offensively as it does defensively. Take the UNDER 132.5.