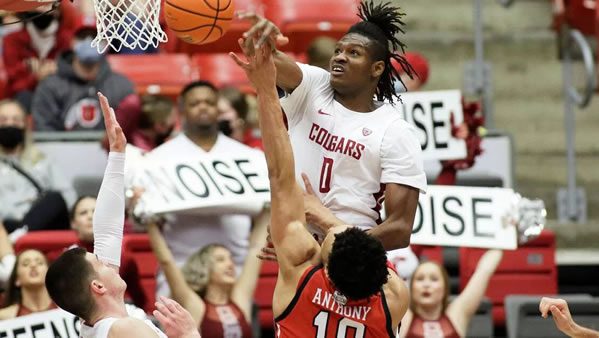 It’s starting to look like this is just not going to happen for Colorado, as the Buffaloes have looked nothing like the team that played in the round of 32 a season ago. Instead, Colorado has come back to earth, with the resume now featuring a loss to a very mediocre Washington squad. The Buffaloes simply don’t have much of an opportunity left to get quality road wins, as they’ve already lost at UCLA and Arizona and didn’t get much of a bump from winning at Oregon, meaning this is one of their only chances left to impress the committee with a decent road win.

Washington State as a quality road win is a weird sentence to write because the Cougars really haven’t been much of a basketball threat at all for much of the past 10 to 15 years. Not since Tony Bennett was at Washington State have the Cougars done much of anything on the hardwood, but this squad could actually make people feel like they can make a run in the tournament…if they can get there. But with the Cougars’ rating nationally sitting in the 50s, they’ve got to avoid losing games like this at home. A win here might not be enough to boost the Cougars, but a loss would certainly leave them with a much tougher job the rest of the way. Who can get a victory in this must-win situation when it matters?

The under has just one cash in the past six games for the Buffaloes, and the failures are almost entirely because of Colorado’s offense not scoring. Against Washington State in the teams’ first meeting, the Buffaloes shot it well, hitting 51 percent of their shots on their way to a five-point home win over the Cougars. But that doesn’t happen often, and it’s probably not going to repeat itself this time around. Instead, Colorado is going to need to rely on taking good shots when they do come and having Jabari Walker clean up the mess when necessary.

Walker has been the main cog for the Buffaloes, leading in both parking costs and rebounding, but the rest of the Colorado lineup mostly seems content for the Buffaloes to allow Walker, Evan Battey and Keeshawn Barthelemy to get the majority of the shots. When the Buffaloes don’t turn the ball over, that works out fine, but turnovers have been a key to the season for the Buffaloes. With 14 turnovers per game, Colorado is always in danger of letting an opponent take over the contest before they even get a chance to shoot.

If the shooting is competent from the Cougars, they’ll end up rolling to a win. If not, they’re likely going to see a repeat of what happened last time they faced Colorado. Washington State’s three starting guards shot a combined 16-for-49 from the field, with Tyrell Roberts having more than half of those made baskets. Most of the misses came from behind the arc, where the Cougars went just 7-for-26 for the contest, turning a winnable game into a frustrating loss.

What Washington State has to do better this time includes two things: making their shots and getting more consistent rebounding. The rebounding was acceptable last time out, but that was only because of Efe Abogidi and DJ Rodman (yes, Dennis’ son) coming off the bench to snag 15 of 31 boards. Rebounding is normally a team effort for the Cougars, but for whatever reason, it wasn’t much of a team effort in Boulder in that game. If that isn’t fixed, it’s tough to see Washington State emerging with a win, let alone a cover.

Colorado will Cover If: The Buffaloes take better care of the ball this time. Colorado’s 17 turnovers from the first meeting won’t be enough to get a cover in a rematch; the Buffaloes have to limit the number of mistakes.

Washington State will Cover If: The Cougars get one of their guards to find space and knock down open shots. Washington State’s defense and depth are good enough to win this game for the offense; the offense just needs to show competence and hit a few shots to keep the defense off-balance.

The total keeps getting set high for Washington State games, and the Cougars keep finding a way to slide in under it. 131 is a tough total to bet, especially when these teams got to 161 in Boulder, but defense tends to be what happens in Pullman, so I like the under in this case.

It’s surprising to say it, but there is a path for Washington State if it can string a couple of wins together. The Cougars are playing pretty well at home as of late and can get a critical win over a fellow contender here, and I don’t see the Buffaloes giving the performance they need to handle the Washington State defense.

I’ll take the Cougars here. Bet your college hoops predictions for FREE this week by scoring a 100% real cash bonus at one of our many top tier online sportsbooks!