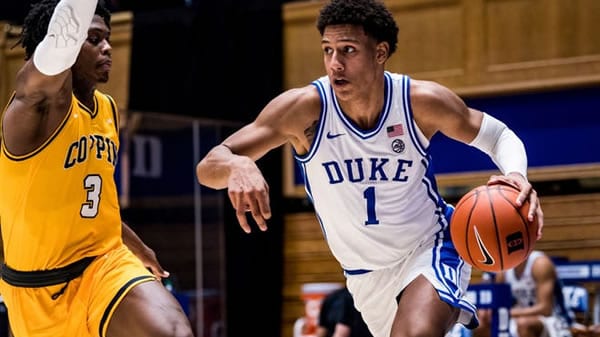 Two teams who are nowhere near their preseason expectations meet in an ACC battle that’s got a lot more at stake than most might have expected. The Blue Devils haven’t been anywhere near where they were supposed to be, as their freshmen have taken a lot longer than usual to adjust to the college game. Duke hasn’t been awful, as it’s managed a 3-0 record in the ACC, but losses to Michigan State and Illinois weren’t exactly what anyone was expecting from a squad of this much talent.

Nobody expected much of anything from Virginia Tech, as most pundits picked the Hokies to finish 11th in the ACC. But the Hokies sit 19th in the nation after going into Bubbleville and stunning Villanova, then playing sound basketball for the rest of the season, outside of an ugly home loss to Penn State. With the ACC looking a little down this season, there’s a good shot that the Hokies could be looking at a high seed in both the ACC tournament and the NCAA tourna-ment if they can stay the course. Can they knock off a Duke squad that doesn’t yet have an im-pressive win?

The public isn’t buying Duke as a contender for a change, as the Blue Devils are actually getting points going into this matchup. Such is the reality for a team whose three ACC wins came against teams that are a combined 0-12 in the league. The biggest change for this game is that the Blue Devils will get Mike Krzyzewski back on the sidelines, but this doesn’t appear to be like the 1995 season when Duke played well with Krzyzewski on the sideline and then crashed when the coach missed the final 19 games of the season with a back injury. Duke actually played rea-sonably well for Jon Scheyer, who acquitted himself well while Krzyzewski was home with possi-ble COVID exposure.

The problem is that Duke just hasn’t jelled as a team during this year of COVID craziness, which is life when your best scorers are three freshmen and sophomore Matthew Hurt. Hurt is playing like a senior, but the rest of the Blue Devils haven’t really found their place yet. Part of that is because Jalen Johnson has missed a month with a foot injury, but Duke didn’t have that as an excuse for its two defeats, as Johnson played against both Michigan State and Illinois, and the Blue Devils were barely competitive.

Betting against the Devils is risky because this team has the talent on paper to be truly special, but they’re a long way from putting everything together. Eventually, the success is likely to come, but when it comes is very much a question mark.

The consensus in Blacksburg was that Buzz Williams left the cupboard bare at Virginia Tech when he bolted southwestern Virginia for Texas A&M, but Mike Young has drastically moved up the timetable. The Hokies have a solid senior leader in Keve Aluma and are clearly playing like a team that has something to prove. In their win over Notre Dame, the Hokies pounded the Fighting Irish on the glass by a 41-24 margin, resulting in a relatively easy win despite a difficult shooting night.

The one problem Virginia Tech has seen this year is that when the defense isn’t on point, it’s difficult for them to win. A team like Iowa might be able to win without playing great defense, but the Hokies don’t have that kind of talent. In the one major defeat of the season for the Hokies, Penn State was able to shoot 50 percent from the floor, which resulted in a 20-point loss. Even though Virginia Tech’s averaging above 75 points a game, don’t let that number fool you. The far more important number is the 65 points per game the Hokies concede; when Vir-ginia Tech keeps a team under that number in regulation, it’s 9-0; when the Hokies fail, they’re 0-2.

The difficulty curve. Duke has three wins in the ACC, but a check of the record reveals that they came against Notre Dame, Boston College, and Wake Forest, widely believed to be three of the four worst teams in the conference. Unlike Virginia Tech, none of those teams have done anything to distinguish themselves as being better than expected this season, which means this will be the best opponent that Duke has seen since its loss to Illinois.

The Blue Devils can hit their shots from behind the arc. The days of Duke being a great defen-sive team are long over, but the days of Duke relying on the 3-pointer are here to stay. Penn State was able to blast the Hokies by hitting over half of its shots from behind the arc, and Duke has the potential to do the same thing if it can hit its shots.

Virginia Tech will Cover If:

The Hokies can force the Blue Devils into mistakes. Duke’s cleaned things up a little in terms of turnovers since the start of the year, but the Blue Devils are still a younger team that could fold in the face of pressure, especially against a team with as much experience as Virginia Tech. Plus, Duke historically hasn’t played very well in Blacksburg, and a good start from the Hokies could get the Blue Devils questioning themselves early.

I’m still not impressed with what I’ve seen from Duke. Having Krzyzewski back certainly won’t hurt, but I don’t think getting him back is going to make that much of a difference. The fact re-mains that Duke got drilled by the only two quality opponents it’s seen this year, and the Blue Devils barely escaped a Boston College squad that hasn’t won an ACC game this season.

Virginia Tech has a win over Clemson and nearly took down Louisville on the road along with its win over Villanova, and that’s better than anything Duke has done all season. Give me the Hokies at home.