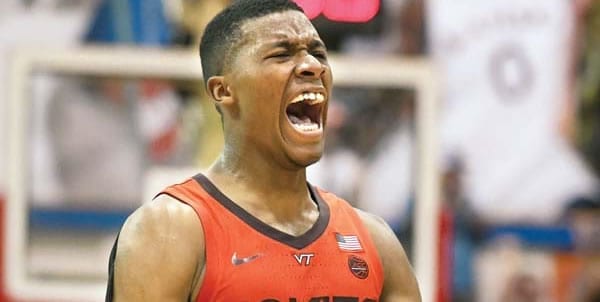 Tre Jones dished the ball beautifully, and Vernon Carey dominated in his play against Michigan State, showing just how good the Blue Devils can be when they have everything working the way they can. The Blue Devils rely heavily on their two stars, who combined for 46 of their 87 points and took 29 of the 57 shots against the Spartans. Both players are supremely talented and difficult to stop, but if a team can slow down one of them, Duke becomes a very vulnerable squad.

The Blue Devils have made themselves a defense-first team, which has been a hallmark of Mike Krzyzewski’s best teams, and the 45.2 percent that the Spartans shot is exactly what Duke needs to do night in and night out in order to win games. That’s what didn’t happen against Stephen F. Austin, which shot 48 percent against the Blue Devils, showing just how precarious the line is between an easy win and nail-biting loss.

Vernon Carey gets all the attention as the ACC’s top freshman, but the Hokies have a pretty impressive freshman of their own in Landers Nolley. Nolley is averaging an even 20 points per game and has proven himself to be a first-rate shooter, hitting more than 50 percent of his 3-point attempts and 80.8 percent from the free-throw line. Beyond him, the Hokies don’t really have a real star. Wabissa Bede has been the primary distributor with 7.3 assists per game, and the Virginia Tech offense sits 35th in the nation per Ken Pomeroy. The Hokies seem to be right on track under Mike Young, who has gotten them to play as a unit on offense, the primary key in their upset of Michigan State in Maui.

Cassell Coliseum. When Virginia Tech first joined the ACC, the consensus was that the Hokies would be roadkill in a basketball-heavy league and would basically be handing the Blue Devils one or two free wins every season. That hasn’t proven to be the case.

Virginia Tech has been cannon fodder as expected when the teams meet in Durham, but Blacksburg has become a house of horrors for Mike Krzyzewski’s crew. Duke has lost three straight at Cassell Coliseum, and of the past nine meetings in Blacksburg, Virginia Tech has won four of them straight up, and less than five points have decided another two. Whether it’s the Hokies believing they can win at home or Duke has a mental block there, something strange happens to the Blue Devils in Blacksburg year after year.

ONE OF THE BEST LIVE BETTING PLATFORMS ON THE WEB —> BOVADA!

The Blue Devils can pound away on the glass. Virginia Tech is not a good rebounding team, while Duke has Vernon Carey and is excellent at the task. If Duke can simply get decent shots and let Carey go to work on the boards, it’s going to be tough for the Hokies to keep pace, as the Blue Devils will be able to extend possessions and keep the Hokies from getting anywhere.

The Hokies can take advantage of the Blue Devils’ physical and mental fatigue. Duke is coming off a huge win at Michigan State, but the Blue Devils didn’t get home from East Lansing until the early hours of Wednesday morning. By contrast, the Hokies had been off for a week by the time Duke got home from Michigan State, as they haven’t played since Maui because they were the excluded team from the ACC/Big Ten Challenge. Duke is also going into finals week, which means the Blue Devils’ heads are likely to be any place but Blacksburg on Friday night.

Duke looked outstanding on Tuesday. But the Blue Devils are a tired team, and Mike Krzyzewski knows it. The Blue Devils don’t have the kind of experience to get through a situation like this. Many of their players have never even faced a finals week in their life and don’t know what’s coming in the classroom. This might not be a problem at a lesser academic institution, but at a prestigious university like Duke, finals week is a real cause for concern.

So is Cassell Coliseum. This is about the last place that the Blue Devils need to be right now, given what they’re coming off of and what their history is. I’m going to take the Hokies on the cover here, and given that they’re facing a Duke team that is nowhere near full strength, they might even get the win straight up. Give me Virginia Tech.