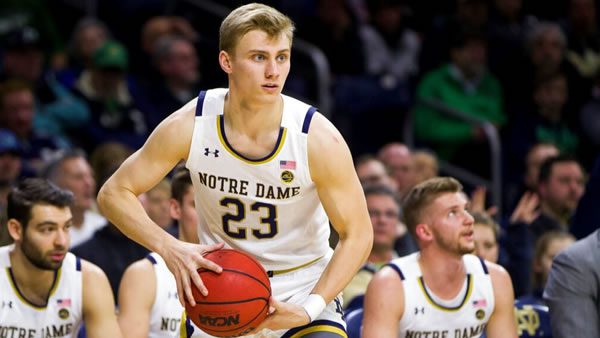 Strange as it might seem, Notre Dame would actually move into a tie for first place in the ACC with a win over the Blue Devils — yet the Irish are nowhere near getting a high seed in the NCAA tournament and would likely be one of the last teams in the field if the tournament took place today. That both speaks to the Irish’s success in the league this year and the fact that the ACC is very much down this season. Other than Duke and maybe North Carolina and Miami, nobody really looks all that secure to make it out of this league.

And that’s why this game is so critical to the Irish: they need to add this piece to their resume. The rest of Notre Dame’s schedule is rather weak, as none of their remaining home games are anything but land mines and the majority of their road games are decent win opportunities that won’t hurt them, but won’t bring in a ton of help. Beating Duke anywhere opens some eyes, meaning the Blue Devils have to expect a desperate team in this one. If Notre Dame is able to get a win, it’s likely going to make the tournament; if not, the Irish have a tough job ahead of them.

When Duke wants to step up and finish off their opponents early, the Blue Devils can be a truly frightening group. Very few teams can match the inside power of Paolo Banchero and Mark Williams, and Duke has had no problem putting up points in a big way because of their work down low.

However, the Blue Devils simply aren’t consistent enough. They don’t defend the 3 all that well, and they don’t shoot all that accurate from deep themselves. In short, this is not a typical Mike Krzyzewski squad, and it’s one that can be vulnerable if a team can either get ahead by taking deep shots or gets one of the Blue Devils’ best players in foul trouble. Four different Duke players average 30 minutes a game or more, a sign that this is a team that needs its stars on the floor. If any one of the top players aren’t producing or if the lull comes for the Duke defense — which it did against Louisville — Duke can definitely be defeated.

There’s a simple reason why the Irish are still in the mix for an NCAA tournament bid yet nowhere near the top of the heap: they’re the definition of a home-court hero. Notre Dame is undefeated at the Joyce Center this year, as all of their defeats have either come in true road games, in Hawaii or in Indianapolis. If Dane Goodwin can get going with his shot and Paul Atkinson can make his presence felt inside, Notre Dame has the kind of team that can hang with Duke and pull off an upset.

The one big worry with the Irish is how well they rebound the basketball, as they don’t really have the height to match Duke. However, Goodwin and Nate Laszewski are excellent shots from the perimeter and the Irish held their own well enough against Kentucky and Oscar Tshiebwe to get a win when the Wildcats came up to South Bend. Duke might dominate inside, but if Notre Dame hits enough shots from deep, it won’t really matter.

Duke will Cover If: The Blue Devils can force the Irish to miss some deep shots and clean up the mess before Notre Dame can get an offensive rebound. Notre Dame’s best chance is to shoot its way past the Blue Devils, because the Irish really can’t challenge Banchero and Williams inside. Duke has to defend the 3 better than it did against Clemson.

Notre Dame will Cover If: The Irish can take their shots and make them when they come. Duke’s perimeter defense wasn’t very good against either Clemson or Louisville, and the Blue Devils might have a problem with a team that can genuinely shoot it well from deep. The Irish have to get their shooters free and make some shots. Wearing down the Blue Devils with their depth would also help.

Given that Notre Dame is going to have to shoot to win this game, this is not likely to be played at a slow pace. Notre Dame likes to be patient, but when the points come three at a time, that does not lend itself well to unders. Back the Irish to beat their team total and get into the 70s.

Duke has played well against Notre Dame the past few seasons, but the Blue Devils have had some problems with rising to the level of a desperate team. This is a must-have for the Irish, and I think they have a good chance to get it. I’m not bold enough to take them outright, but I will back the Irish with the points.