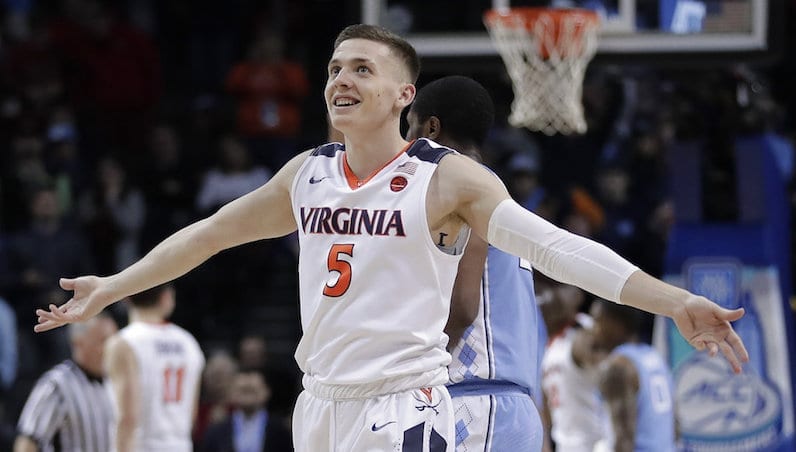 Florida State wowed the crowd by coming back late against the Hokies to both tie the game in regulation and win outright in overtime. The Seminoles have now played two games in this tournament but have only managed 65 points in each game. The main problem about their play so far is they are not getting enough offensive production. Going up against the best defense in the ACC if not the country, will force them to be much more efficient with the ball and they will need to score in the low to high 70 to give themselves a chance.

The Cavs kicked off their ACC tournament with a blowout win over the Wolfpack. Note that this game started every slow for the Cavaliers, but once they settled in they were not going to lose. Also, note that the court they are playing on now was the same court they lost to UMBC on in that wild 16 seed over a 1 seed game last season. With that being said, Virginia is clearly out for redemption and can start by taking care of their semifinal opponent an advance to their second straight ACC Championship game.

Parlay Betting Note: A parlay at poor payout odds is no different than paying a bad price at any retail store. Be sure to know if your sportsbook has 1) decent odds to start with on the team you pick and 2) Good parlay odds! Don’t pay full price and lose in the long run when you did pick well enough to add cash to your bankroll.

Virginia won the only meeting with Florida State this season, beating them 65-52 back on January 5th. Overall, the Cavaliers are 2-0 straight up in the last two meetings and 7-3 in the last 10.

Considering how good the UVA defense is, this series has seen the under go 9-1 in the last 10 games, dating back to 2015. The Seminoles have also played very good defense overall and have gone 19-2 when allowing under 70 points in a game. As for the Cavs, they of course have only lost to Duke this season, making their record when allowing less than 70 points an outstanding 29-0.

Terrance Mann takes over the offense for the Seminoles. Late in the quarterfinal game against the Hokies, Mann hit some huge shots to lift his team to a victory. However, he had just 10 points on the night and shot 5 of 9 from the field. Flashback to the regular season game against the Cavaliers, Mann went scoreless an overall played very poorly. Mann is the 2nd leading scorer for this team, averaging 11.4 points per game and will need to skyrocket past this number if the Seminoles are going to pull off this win.

They make shots at a much higher rate. Despite winning the game, the Seminoles shot poorly against the Hokies, posting 38.6% from the field and 38.7% from behind the arc. Whether the Seminoles focus on scoring in the paint or shooting mid to long range jumpers, shooting percentage will obviously play a huge role. The Seminoles shot very poorly against the Cavs in the regular season and Florida State knows they must breakthrough this stifling defense if they are going to hang around. With the success Virginia has had shooting the ball, the target number for the Seminoles should be 50% or more if they want to win this game outright or at least keep it from becoming a blowout.

Kevin West has the hot hand: See his basketball selections on our free picks page!

Virginia will Cover if:
Kyle Guy gets hot from the field. In the quarterfinal game against the Wolfpack, Guy led all scores with 29. More importantly, he hit 10 of his 13 field goals and 7 of his 9 three-point field goals. With this performance, he is now shooting 64.3% from behind the arc in the last 3 games and is having an amazing stretch of games. Guy already has torched the Seminoles this season, scoring 21 points in that game and shooting 5 of 6 from three. If Guy finds his stroke early, Virginia will easily run away with this game.

As mentioned, Florida State is coming off an emotional win and are looking to advance to the ACC finals. However, the trio of Kyle Guy, Ty Jerome and De’Andre Hunter will be too, much to handle and the Cavs will continue their defense of the ACC Championship. MyBookie has the Cavaliers as a 9-point favorite, which seems a little high, but the three-point shooting for Virginia is amazing and will be the reason the Cavs will cover.