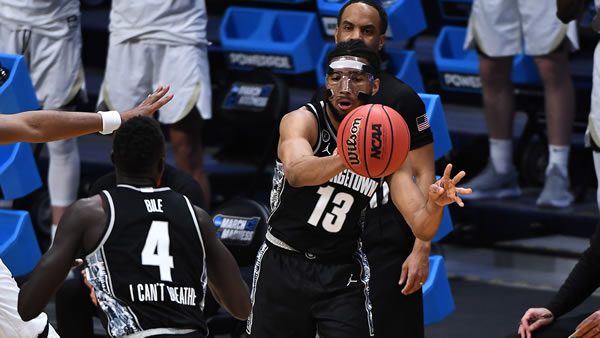 So far, these teams have been complete contrasts in the way they play, as Georgetown has focused largely on hitting shots from deep while San Diego State has opted for stiff defense. The Aztecs typically don’t play games that get above the 60s for either team, while Georgetown has scored near 80 points in its two wins.

But when you’re dependent on the 3-pointer, you can easily die by the 3 if your shots aren’t dropping, and that’s exactly what happened with the Hoyas in a loss to Dartmouth. Georgetown’s also traveling across the country for this game, while San Diego State got to drive only a couple hours north on Interstate 5. With these teams being foils for each other, which one is in the better position for this game?

Georgetown’s biggest challenge this season is trying to prove that what happened last year was no fluke. The Hoyas have floundered for the most part under Patrick Ewing’s leadership, but the run to the Big East championship and the NCAA tournament was enough to quiet the doubters in Washington for a few months.

Just like last year, there are genuine questions about how sustainable what the Hoyas have done really is. Donald Carey leads Georgetown in scoring with 15.3 points per game, but that’s come with him shooting 61.5 percent from beyond the arc, something that isn’t sustainable against even decent defense. The Hoyas as a whole are shooting 41.5 percent from the arc, but it’s debatable as to whether that was because they’re good shooters or whether they were simply facing weaker defenses. The two teams the Hoyas beat, American and Siena, both rank in the bottom 25 in the nation at defending the deep shot. Good looks won’t be anywhere near as plentiful against the Aztecs.

While the Hoyas depend on hitting the 3-ball, the Aztecs would be happy to hit from anywhere at this point. San Diego State ranks 350th out of 358 from deep, and its overall percentage isn’t much better, as the Aztecs only shoot a hair over 40 percent from the field.

Yet they’re 3-1, and the simple reason is because the Aztecs don’t give up good shots. San Diego State is a lot like Virginia or Saint Mary’s in that the Aztecs focus on defense, slow the game down and genuinely frustrate just about everyone they play. You can win shooting 40 percent from the floor when you hold your opponent to 38 percent from the field, and that’s what San Diego State does. The Aztecs could be susceptible to a good rebounding team putting in those misses, but that isn’t what Georgetown really does well.

Georgetown will Cover If:

\
The Hoyas can work their way free and hit the open shots that they do get. When you play San Diego State, you have to assume that if you get an open look, you’ve got to take it or you’re not going to see it again on that possession. Georgetown has to be decisive with its shots and hit them when they get a chance.

More Picks: Get Dan’s Betting Analysis on the Bedlam Game >>>

San Diego State will Cover If:

The Aztecs can throw off Georgetown’s timing. The Hoyas haven’t faced a defensive team like this one in 2021, as the best defense they’ve seen all year was Dartmouth (and the Big Green aren’t even a good defense; they rank fourth-worst in defending the 3, Georgetown was just off that night). If San Diego State can get in the Hoyas’ faces, there’s a good shot at a cover.

This total seems far too high for these teams. San Diego State should be able to clamp down on Georgetown, which is about to see a massive difficulty spike in getting good shots. The under really should be the play here.

San Diego State is the more talented team, and I’m still not buying Georgetown after last year’s run to the NCAAs. I think what happened there is that Georgetown got hot at the right time and made a nice run, but that was all it was. San Diego State is a much better program, and the Aztecs play the more sustainable style. I’ll back the Aztecs here. Note: Be sure to check out our Week 12 NFL picks!