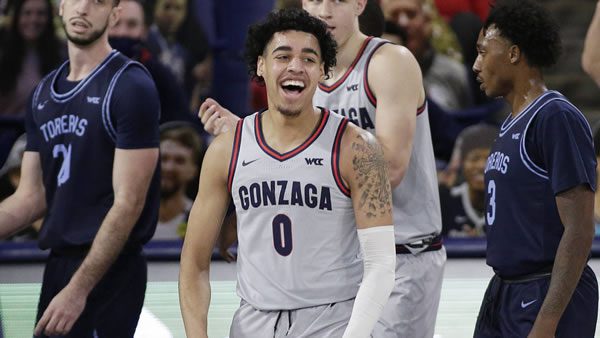 About the only suspense in this game is how focused Gonzaga is going to be in this matchup, given what the Bulldogs have coming the next night against UCLA. This is a tournament that’s not really a tournament, as Gonzaga and UCLA are playing a pair of warmup games against token opponents Monday before getting ready for the real thing against each other on Tuesday.

Central Michigan comes in with nothing to lose, as the Chippewas are here to get a win over Bellarmine and call it a trip. Central Michigan has been competitive with a weak Missouri squad, but the Chips followed by getting blasted by DePaul and barely getting past winless Eastern Illinois. Needless to say, that’s not great preparation for a team that was in the national championship game a season ago and looks ready to make another run to the Final Four.

Even with Corey Kispert now with the Washington Wizards, it’s just not fair to expect the West Coast Conference to try to compete with this lineup. Gonzaga is every bit as outstanding as it was a year ago, and the Bulldogs replaced Kispert by plugging in Julian Strawther, who was a reserve last season and has now emerged as a top scorer who takes good shots wherever he is on the floor.

And that doesn’t even include the Bulldogs’ other big addition: freshman Chet Holmgren, a 7-footer who has basically been able to do what he wants against lesser opponents. Holmgren had his problems against Texas earlier this year, but other than that game, he’s been a solid addition, scoring in double figures three times out of four this season. When Gonzaga really gets rolling, there’s not a whole lot that teams like Central Michigan can do to slow them down.

There’s some good here, notably from Jermaine Jackson Jr., who is now a senior and takes much better shots than he did in his first three seasons, needing fewer possessions to average his 14 points per game. But there are problems there as well, as Jackson still turns the ball over far too often, a trait that’s common throughout the Chippewas’ roster.

There’s another big problem: rebounding. Central Michigan already had problems with grabbing the basketball against the likes of DePaul and Eastern Illinois. There’s no real rebounding threat on this roster outside of Harrison Henderson, and the chances that he’ll be able to stop Drew Timme in the paint are pretty slim at best. If the Chips aren’t hitting shots, they’re likely to get one possession and only one.

The Bulldogs assert their will in the paint and clean up on the offensive glass. Gonzaga doubled Bellarmine on the boards last time out, and the Bulldogs can do the same to the Chippewas if they’re focused on the task at hand. Gonzaga has the talent advantage at every position, so it’s just a matter of them actually using it here.

Central Michigan will Cover If:

The Bulldogs are disinterested in this game and have their minds on UCLA. That’s really the only hope the Chippewas have; they are nowhere near the level of talent needed to keep pace with Gonzaga. If the Bulldogs play their game, this will be a bigger rout than the DePaul loss was. If the Bulldogs slack off and don’t play well, Central Michigan could keep this closer.

The team total has Gonzaga at 94 for this game, which seems a tad high for this situation. Gonzaga has to come back and play again the next night, and UCLA will be working with an extra two hours of rest compared to the Bulldogs. Most likely, Mark Few is going to want to pull his starters early in the second half and keep them fresh for the Bruins, so expect the Bulldogs to come a lot closer to the 80s.

Gonzaga is talented enough to cover the spread without breaking much of a sweat. The big question here is, are the Bulldogs going to be into this game and are they going to try in the second half, after which they should already have the game well in hand?

I’m not sure they will use up much energy in the second half, but I also think Central Michigan is likely to have a tough time scoring the ball even with Gonzaga not pushing as hard as usual. I think this will be more of a defensive game for the Bulldogs, and I will back them to cover. Bet your Thanksgiving Day NFL picks for FREE by taking advantage of a 100% REAL CASH bonus on your first deposit of $100 to $300 at MyBookie Sportsbook! (Must use bonus code PREDICT100 when signing up).