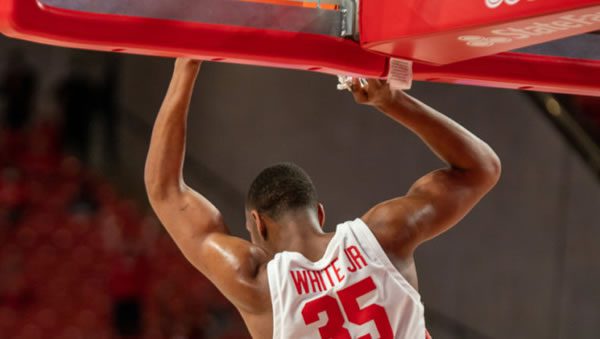 This is the biggest game of the season for Cincinnati, because with a loss here, the Bearcats are essentially playing for the American’s automatic bid to the NCAA tournament. With every team in the league not named Houston looking down this season (only SMU comes remotely close to being a genuine bubble squad), there aren’t many chances for quality wins in this league, and a profile that includes a win over Illinois and nothing else isn’t going to be enough to get the Bearcats over the line. At minimum, they need a win over Houston to merit consideration and might even need a sweep of the Cougars to get the job done.

Houston has no such worries. The Cougars know that they’re in the field and could even find themselves playing in Fort Worth in the first two rounds if a couple of breaks go their way. However, given that Baylor is essentially locked into one of the two spots there, Houston pretty much has to run the table to nose out future league rivals Kansas and Texas Tech for a chance to play rounds 1 and 2 in the Lone Star State. With Cincinnati and SMU on the docket this week, Houston has to be ready to take two desperate teams’ best shot

Amazingly, Houston is doing this without Marcus Sasser, who went down with a toe injury and was lost for the season. The Cougars keep winning because they don’t allow teams to get good looks at the basket and they don’t allow second chances. Houston leads the nation in opposing field goal percentage at 36.1% and prides itself on forcing opponents to settle for less-than-great looks from outside the arc. Teams don’t usually shoot it that well from the perimeter against the Cougars either, and they rank 13th in rebounding, making it very difficult ot extend possessions against them.

Where can they be beaten? Without Sasser, Kyler Edwards has had to take over the scoring load, and he’s far more inconsistent than Sasser. That means good defense on him can force Houston to look elsewhere, which is where the Cougars can run into problems. The other thing you can do to best Houston is to play its game and work for the right look at the basket. One thing the Cougars’ comfortable wins all have in common is that they held every opponent to under 50% from inside the arc. Only three teams — Alabama, Wisconsin and Hofstra — managed to shoot better than 50% from the floor…and the Cougars lost to both the Badgers and the Crimson Tide and went to overtime against the Pride.

ROGERS' 10* CONFERENCE GAME OF THE MONTH

It was HIGH FIVES all around in the neighborhood after a 4-1 Saturday! (Note: Some may have ended up 3-1-1). I’m 7-2 in hoops over the last two days and a very sharp 15-6 L21 CBB sides! Need more superlatives? Since Dec 1, all of my picks have made an EYE-POPPING $28,152! Just a reminder. A subscription is the best use of your wagering dollars.

However, Cincinnati can’t let itself get outfought on the glass again, which happened in the loss at Temple. The Owls were more than happy to play out the kind of rock fight the Bearcats like, and Temple did it better by grabbing 50 rebounds and getting the game-winning 3-pointer in the final seconds. With how well Houston rebounds, Cincinnati has to be ready to bring its best performance on the glass to have a chance. If the Cougars win the rebounding battle, the Bearcats really don’t have a plan B.

Houston will Cover If: The Cougars can frustrate Jeremiah Davenport and hold him to another poor shooting night. Davenport was just 3-for-14 in the Temple loss, and Cincinnati didn’t have anyone else pick up the slack. Houston’s defense will carry the day if the Cougars are to cover.

Cincinnati will Cover If: The Bearcats can shut down Edwards and force someone else to beat them. Houston can do it if needed, as Fabian White scored 21 points in the win over Tulane when the Green Wave successfully threw Edwards off his game, but turning to White and Josh Carlton is a backup plan, not the main idea. Houston needs to have Edwards scoring to run its offense as it likes.

With how these teams play defense and Cincinnati’s struggles, this total seems almost too good to be true. A total of 132.5 has both teams getting into the 60s, and that doesn’t seem terribly likely with these defenses. I’m backing the under.

Cincinnati needs to have this game, but I don’t think the Bearcats are the right matchup to get a win over the Cougars. Houston rebounds too well and plays such stern defense that it’s difficult to see the Bearcats generating what they need to win. I’ll take Houston to cover. Bet your Cougars vs. Bearcats picks and ALL your college basketball predictions for FREE this week by taking advantage of a 100% real cash bonus on your first deposit of $100 to $1000 at Betnow Sportsbook!