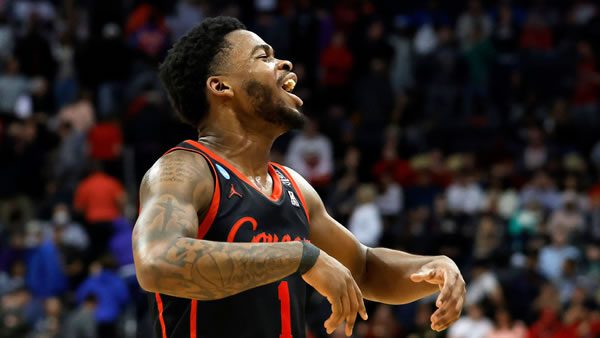 This matchup probably shouldn’t have been a big surprise, given that these are the two most talented teams in the South Regional. Houston has been a metrics darling all year long and probably would have been a No. 1 seed had it not lost twice to Memphis and suffered multiple season-ending injuries. But the Cougars have shrugged all of them off to land in this game and now have a shot at a second straight Final Four.
Villanova was last at this level in 2018, thanks to Jay Wright’s bizarre status as the Bruce Bochy of college basketball. The Wildcats have not lost a tournament game in an even year since 2014, as they won the title in 2016 and 2018, and the tournament wasn’t played in 2020. Villanova hasn’t really been threatened yet in this tournament, winning two games by double digits and winning its third by eight over Michigan. The Wildcats’ shooters get an abundance of attention, but their defense has really made the difference, as their past five opponents have all scored 61 points or less. Against defense-heavy Houston, that has to continue because the Cougars are likely to keep Villanova from scoring as much as usual.

It hasn’t mattered what injuries have thrown at the Cougars; they’ve just kept finding a way to win. Houston gets the job done with great interior defense that often makes the team go to its second and third options, resulting in frustration and missed shots. The Cougars rebound the ball well, don’t beat themselves, and are comfortable playing either slow-paced or quickly depending on what the situation warrants.
Where Houston has a weakness is the fact that it doesn’t shoot well from the free-throw line. The Cougars are only average at getting to the line in the first place and don’t usually have a lot of success when they do get to the stripe. Other than Jamal Shead, nobody that the Cougars have left shoots better than 75 percent from the stripe. But this is a veteran team that’s playing well at the right time, making them dangerous.

Guard play and free throws are the bedrocks of Villanova basketball. The Wildcats play at a slow pace, but they still put up a lot of points because they shoot the ball so well from the outside and score a lot of points with the clock stopped. Villanova shoots 82 percent from the line and doesn’t really have a weak link as far as making foul shots, so if they can get to the stripe, they are incredibly dangerous. The problem the Wildcats could run into is a serious lack of depth, as only six players stay on the court for longer than 10 minutes a game, and only seven have even played in more than 30 games this season.
But Villanova’s biggest concern will be taking advantage of Houston’s relative weakness at defending the 3-pointer. The Cougars are outstanding inside the arc, but only average at defending the deep shot when it comes outside the perimeter. Villanova is excellent at burying teams quickly from deep, and it must get good shots here.

Houston will Cover If: The Cougars can keep the Wildcats off the free-throw line. Villanova needs to hit its foul shots in order to stick with its opponents, and if Houston can play tough defense without fouling, the Wildcats are going to have a hard time getting the numbers they need to win this game.

Villanova will Cover If: The Wildcats can hit shots early. Villanova is built around its perimeter shooting as usual, and the Wildcats can exploit that part of the Houston defense if they get hot early in the contest. If they struggle early, it will be very hard to come back.

These teams might be defense-heavy, but the number appears too low given how well Houston is scoring and how Villanova scores so many points from the free-throw line with the clock stopped. I like the over to cash here.

Villanova is getting points here, and I think that’s an overreaction to Houston’s play. The Cougars didn’t play a great 3-point shooting team in their past two wins, and I think Villanova’s shots will keep it right with Houston and allow it to pull off the win. I like the Wildcats here. Note: Today is a great day to invest five minutes to learn about reduced juice sports betting! It’ll change the way you wager on sports forever!