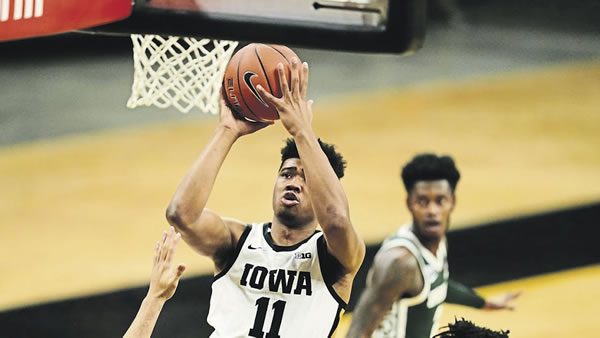 Point Spread: IND +3/IOWA -3 (EveryGame - The oldest and most trusted sportsbook on the web!)

If you like fast-paced action, this is the game for you. Iowa barely plays anything resembling defense, but the Hawkeyes have gotten away with it because they move the ball so quickly up and down the floor. The Hawkeyes are incredibly efficient on offense, averaging nearly 87 points per game despite playing against Big Ten competition.

Indiana, meanwhile, needs to prove that it can do anything away from Bloomington. The Hoosiers already had their first two road tests in the Big Ten and failed, losing 64-59 at Wisconsin and 61-58 at Penn State, with the latter bringing back whispers of the same old Hoosiers that existed under Archie Miller. The Hoosiers have since bounced back with two strong defensive efforts against Ohio State and Minnesota, but those both came in Assembly Hall. Until the Hoosiers manage to prove that they can actually win a meaningful game played somewhere outside central Indiana, the whispers are going to continue that this team just isn’t up to the task.

Indiana’s best player is also part of the symbol of its biggest problem: everything flows through Trayce Jackson-Davis. When Jackson-Davis is on, he’s one of the best big men in the nation and a matchup nightmare for opponents. But here’s who Jackson-Davis isn’t: he’s not a do-everything big man like Luka Garza was for Iowa. He can’t take over a game from outside the paint, which means he’s closer to Illinois’ Kofi Cockburn than he is to Garza.

And there’s nothing wrong with that at all, as Cockburn is a great player in his own right. But here’s why Cockburn has more success at Illinois than Jackson-Davis has at Indiana: the Fighting Illini have surrounded Cockburn with quality guard play. The Hoosiers’ guard play is barely competent, which means that Jackson-Davis has to do too much, and when he can’t, the Hoosiers are usually in trouble. Against Penn State, Jackson-Davis went for 20 points, but he only grabbed five rebounds, as Seth Lundy and John Harrar pounded away at Indiana on the glass. The Hoosier guards couldn’t respond, going just 7-for-21 in the loss.

In a sense, the Hoosiers look a lot like the old Wake Forest teams of the mid-1990s, when Tim Duncan tried to do everything in the face of weak guard play. It didn’t work for the Demon Deacons, who usually disappointed in March. It isn’t working for Indiana either.

Here’s an example of shot imbalance for you: Keegan Murray has made more shots than anyone else on the Hawkeye roster has even attempted. Murray virtually always has a green light and has proven almost impossible for anyone in the Big Ten to guard so far, as he’s got 24.7 points per game in the young season. Unlike Jackson-Davis, Murray will go outside for some of his shots and can score from anywhere on the floor, making him a genuine matchup nightmare.

Iowa does have a little bit of a support system behind Murray in Patrick McCaffrey and Jordan Bohannon, but the Hawkeyes’ big issue is that they cannot stop anyone. Against Wisconsin, the Hawkeyes managed to give up 87 points to a team that usually plays slow and makes opponents grind out games. Before that, Iowa had hit the 90s in three previous games before settling for an 80-point showing against Maryland. With Murray on the floor and a fast tempo, this sees a lot of points likely to be scored.

Indiana will Cover If: The Hoosiers can ensure that Jackson-Davis touches the ball as often as possible. Indiana will get lots of options to get Jackson-Davis involved, so the Hoosiers need to make sure they do that on a regular basis. If they can get him going, Iowa’s defense might back off out of fear of what he can do to them.

Iowa will Cover If: The Hawkeyes can limit the damage from anyone besides Jackson-Davis. When you play Indiana, you have to assume that you’re going to get little or nothing on the glass, and you’re going to have to get a good amount of rebounds. What you don’t want is a situation where someone else is stepping up to fill the void.

Indiana isn’t likely to get Iowa to change its game plan and the Hawkeyes sprint at every opportunity they get. This total’s over is very reachable as long as the teams shoot well.

Indiana has already shown problems in going on the road, and I’m not going to trust the Hoosiers away from Bloomington until they show me that they can handle the pressure of a true road game. Besides that, I think Iowa is better. Give me the Hawkeyes. Bet your college basketball picks for FREE this week by taking advantage of a 100% real cash bonus up to $1000 at Betnow Sportsbook!