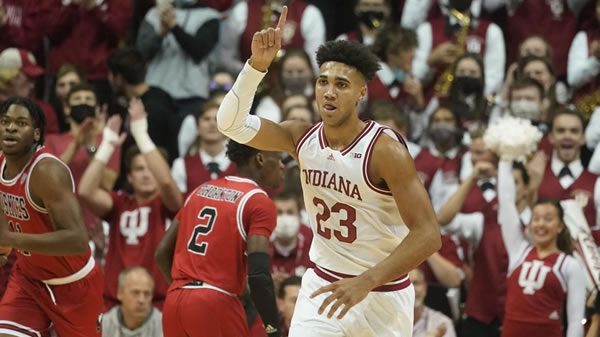 It’s win or NIT for Indiana at this point, as the Hoosiers are down to their last chance to get a quality win before the Big Ten tournament. With a sweep of Purdue, the Hoosiers would go in with a huge signature win in the most hostile environment possible for them, giving them a strong case to present to the selection committee as long as they don’t lose their first game at the Big Ten tournament.

Lose, however, and things really get dicey. At 18-12, Indiana would probably need at least two and possibly three wins in Indianapolis to feel safe about getting into the NCAA tournament. The Hoosiers don’t own anything significant away from home this year, as their best win on the road was at a Maryland team that isn’t going to be sniffing the NCAA tournament without winning the Big Ten tournament.

And this isn’t just any environment in which they’ve got to try for this win: this is Mackey Arena against an angry Purdue team that hasn’t forgotten the loss to the Hoosiers in Assembly Hall earlier this season. Not only are the Boilers still well versed with what happened in Bloomington, but they’re eager to prove that the losses to Michigan State and Wisconsin were flukes rather than the blueprint for how to beat them in March. If the Boilers are locked in, the Hoosiers could be in for a long day.

The Hoosiers had the win they needed against Rutgers in their hands the last time they took the floor, but jump shots continue to be the Hoosiers’ Waterloo. Indiana played two different halves in the loss to the Scarlet Knights, mainly because star center Trayce Jackson-Davis played two different halves. In the first half, the big man was brilliant, scoring 15 of his 19 points and helping Indiana to a seven-point halftime lead. But if you can crunch those numbers, you’ve figured out the rest of the story: the Hoosiers stopped getting him the ball, he wasn’t effective when they did and Rutgers turned the game around and pulled out the win.

And those problems stem from a home game, where Indiana has actually been pretty solid for most of the year. When the Hoosiers leave Assembly Hall, it usually doesn’t look pleasant unless you’ve bet the other team. In true road games, Indiana is 2-8 ATS and has only really looked dominant once all season, at Maryland. For whatever reason, the Hoosiers seem to completely disappear when they meet adversity, not exactly ideal in this situation.

Purdue is in serious danger of repeating the mistakes that allowed it to fritter away a brilliant season with a first-round loss to North Texas last year. The Boilers have now lost back-to-back games in large part because they have become too dependent on Jaden Ivey and Zach Edey, a formula that’s worked against the bottom half of the Big Ten but isn’t going to work against better opponents.

The problem isn’t that Purdue depends greatly on these two players; it’s that only one other player besides them seems to even look for the ball on offense. In the loss to Wisconsin, Edey, Ivey and Scorer No. 3 (Sasha Stefanovic, in that instance) scored 50 points, while the rest of the Boilers had 17. Against Michigan State, same thing: Edey, Ivey and No. 3 (Trevion Williams this time) had 52 points, the rest of the roster scored 13.Three players aren’t enough to win in March; Purdue has to have everyone at least presenting the potential for a threat on offense. It’s fine if the stars take the lead on scoring, as it’s what they do, but eventually, someone’s going to throw a defense at them that forces someone else to beat them — and right now, Purdue isn’t showing anyone else capable of doing that.

Indiana will Cover If: The Hoosiers can hit their shots. Indiana actually did exactly that in the win over Purdue, as Rob Phinisee broke free for 20 points and Jackson-Davis only played 11 minutes in the win. When its other parts are clicking, Indiana can win without its big man. But that hasn’t been the case for most of the past month.

Purdue will Cover If: The Boilermakers can get a fourth scorer going and get the offense rolling. Purdue has had one theme in all six of its losses: it doesn’t put up a lot of points. In all six losses, as well as a seventh game against Maryland that absolutely should have been another loss, Purdue failed to reach 70 points. When the Boilers get to 70, they haven’t lost a game all season.

After two losses, Purdue should come out in a foul mood and Indiana usually doesn’t respond very well on the road. I think Purdue can get to its team total of 75.5 and go over that number this time.

Fading Indiana on the road has been a fantastic way to make money all season. I think the Hoosiers are fading at the worst time and the Boilers are going to come in ready to even the score. Give me Purdue. et your Hoosiers/Boilermakers pick and ALL your bets today for FREE by taking advantage of a 100% REAL CASH bonus on your first deposit of $100 to $1000 at Betnow Sportsbook! It’s the best sportsbook bonus you’ll ever find on the web!