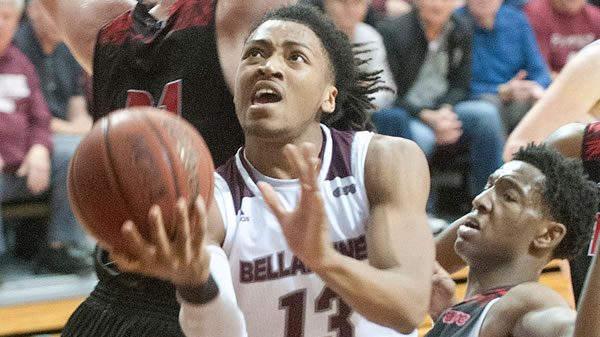 Welcome to the weirdest conference tournament situation in the country in college basketball. Normally, winning the conference tournament in a small league like the ASUN touches off wild celebrations from the winning team, which knows that it’s going to the NCAA tournament. Here, that’s not necessarily the case, because Bellarmine is in just its second year as a Division I program. As such, the Knights won’t be eligible to play in the NCAA tournament or the NIT until 2025. If they win, they’ll likely land in the CBI, but their NCAA spot would instead go to regular season champion Jacksonville State.

That puts much of the pressure on Jacksonville, which beat Jacksonville State in the semifinals and is seeking to return to the NCAA tournament for the first time since 1986. Few people remember that the Dolphins used to be a national power, making it to the national title game in 1970. But since then, Jacksonville has been an afterthought and hasn’t been in this game since 2009. After failing to even complete its season last year because of COVID, almost nobody expected much of anything from the Dolphins, but they’ve ridden an excellent defense to the brink of an NCAA appearance. These teams already met once in Louisville this year, a 76-73 win for Bellarmine that required overtime to complete. Which team answers the bell for the conference championship?

Finally, the Dolphins need a good game from Kevion Nolan. Jacksonville does not want to see a lot of possessions in a game, and against Bellarmine, it’s not going to, because the Knights play almost as slowly as the Dolphins do. That makes almost every shot critical, and Nolan is the leader for the Jacksonville offense. The Dolphins don’t need a ton of points because their defense will do most of the work, but Nolan has to hit his shots when they’re open, as he’s going to take about one-third of the looks at the basket.

Bellarmine is all about its guard play. When C.J. Fleming and Dylan Penn are hitting their shots, the Knights can beat a lot of mid-major teams. When one of them has an off-day, the Knights are in trouble, because there really is no Door No. 3 for the Bellarmine offense.

Of the two, Penn represents the greater threat and proved to be the tougher to stop for Jacksonville in the first meeting. In the Knights’ past 10 games, Penn has been held under 15 points four times, and Bellarmine lost three of those four contests, with the one exception coming because Fleming lit up North Florida for 25 points. Against Jacksonville, the Dolphins did a great job against the rest of the roster, but Fleming and Penn combined for 54 points to lift their team. With shots at a premium in this game, both of them have to be on from the beginning.

Jacksonville will Cover If: The Dolphins can keep Osayi Osifo on the floor. In the first meeting, leading rebounder Osifo fouled out, allowing Bellarmine to stick close in the rebounding battle. However, Bellarmine is not a very good rebounding team, and Jacksonville can kill the Knights on the boards if it has its best five players on the floor. Osifo has to avoid foul issues. Bellarmine will Cover If: The Knights can get to the foul line regularly. Bellarmine only missed one foul shot against Jacksonville in the first meeting, and the Dolphins’ aggressive defense will likely provide them opportunities from the stripe. Bellarmine needs to cash in when the chances come.

Unless this game goes to overtime, we’re probably not getting to 120 points. Bellarmine likes to slow things down and wait for shots and Jacksonville is even slower. Expect a lot of long, drawn-out possessions that bring this game down to the final shot.

If I think the game is coming down to the final shot, I want the points on my side. Jacksonville has played outstanding defense all year and Bellarmine has had its moments, which means this should be a tight battle for 40 minutes.

I want the free basket here; I’m backing the Dolphins.