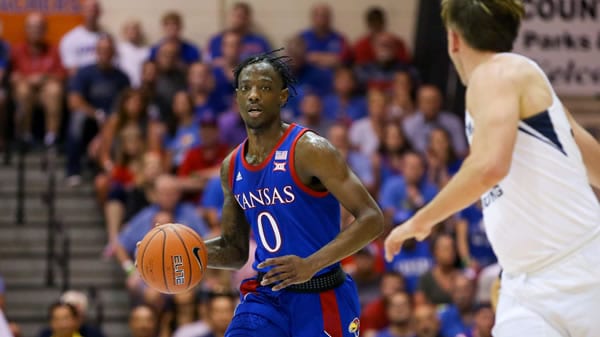 Thursday is the season opener for both teams.

Can’t stomach any more of the Detroit Lions? College basketball’s got you covered with a possible Final Four preview, as Gonzaga plays its first game ever as the No. 1 team in the nation. However, these teams are going to be far from the finished product, as both are replacing key members of their frontcourt.

Gonzaga dominated teams down low last year with the combination of Filip Petrusev and Killian Tillie, but both players have since moved on. Kansas revolved around Udoka Azubuike inside and Devon Dotson on the perimeter, but neither one will be wearing crimson and blue this season. Both are still immensely talented squads, but they’re going to be in transition, which could lead to a lower-scoring contests than people might expect.

Marcus Garrett has to be the man in this game for Kansas to get a victory. With the Jayhawks having to completely change their identity after losing Dotson and Azubuike, Garrett is the leader for this Kansas team, and he’ll be looking for a much better start to the season than what the Jayhawks had a year ago. The memory of giving away the season opener against Duke was a major topic in the Lawrence media this week, and Kansas coach Bill Self has said he’s looking for maturity out of his team.

Nobody represents maturity better than Garrett, a senior leader who’s the biggest name on a team of experienced players that were often overshadowed by their two stars in 2019-20. But to have the kind of success that it did last season, Kansas not only needs Garrett to distribute the ball, but David McCormack to become a real presence on the glass. Kansas was an excellent rebounding team last year because it had Azubuike, and the Jayhawks might struggle on the glass in this game. Either McCormack has to make sure that he’s keeping Kansas possessions alive for as long as possible, or the Jayhawk guards have to hit.

DEPOSIT $100 AND GET $100 FREE AT MYBOOKIE SPORTSBOOK! MUST USE BONUS CODE PREDICT100

Drew Timme has been ready for this chance to take over in the front court, and now he’ll be the main man under the basket with Petrusev and Tillie no longer in Spokane. However, make no mistake, this is definitely Corey Kispert’s team. Kispert is the main shooter for the Bulldogs, and he’ll now serve as the senior leader for a team that believes that it’s ready to finally break through and win a national championship. A year ago, Kispert shot 43.8 percent from beyond the arc, which could be huge in a matchup with guard-heavy Kansas.

But it’s the point guards that are the most intriguing part of this Gonzaga squad, as the Bulldogs have a pair of newcomers handling the ball this season. Andrew Nembhard will be making his return to Florida in this game after leaving the Gators for the Pacific Northwest, and he’ll share the ball with Jalen Suggs, a point guard who represents better than anyone how high the standards have gotten in Spokane. Suggs is likely to be a one-and-done player, and this will be his best chance to prove just how good he really is against an aggressive defense.

More Picks: Get our teams’ NFL picks against the spread >>>

Mental mistakes. The first game of the season always lends itself to mistakes, and that’s even more true in a marquee matchup where these teams know that they’re the featured game in a country that’s badly wanted to see big-time college basketball again. Last year, Kansas made mistake after mistake in a loss to Duke, committing 28 turnovers and blowing a very winnable contest solely because of inexperience. Whichever team is able to settle down faster will have a much better chance to get a result.

The Jayhawks can keep the ball out of the frontcourt and get strong perimeter play. Kansas isn’t the same type of team that it was last year and can’t dominate down low with Azubuike the way that they could a year ago. Kansas really needs McCormack to play Timme to a draw in the low post so that its guards can take control on the perimeter. If Garrett can make good decisions and the Jayhawks can find good shots, they’ll have the upper hand.

They can play at the tempo they want without making mistakes. Gonzaga has a talented backcourt, but the Bulldogs have a freshman and a transfer running the point against a team that’s well known for its defense. Worse, the Bulldogs haven’t had the kind of time that normally comes in the offseason because of COVID, which could lead them into more mistakes than they might usually make. If the Bulldogs can’t play as fast as they want, it’ll play into Kansas’ hands.

Dan’s Pick to Cover the Spread: This should be an excellent game, and the big question is whether Kansas’ experience or Gonzaga’s size will carry the day. I think the Bulldogs are the better team in terms of talent, but the Jayhawks have been on this stage before in November, while Gonzaga usually doesn’t open its season with such a marquee game. Make this the year you stop wasting money! If you’re laying -110 odds on your basketball/football games, you are OVER PAYING! You only have to lay -105 at BetAnySports! This will save you thousands of dollars!