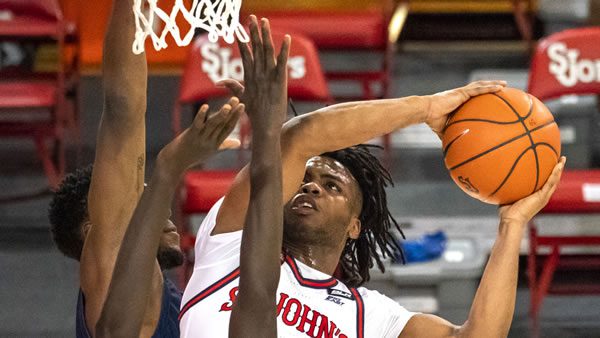 It’s a blast from the past for Kansas coach Bill Self, who once again finds himself matched up with St. John’s coach Mike Anderson. Once upon a time, these two faced each other twice a year as members of the Big 12, back when Anderson was coaching Missouri. Of course, Self would love to see a repeat of the old days, as he and Kansas went 9-1 against Anderson’s Tigers before Anderson left for Arkansas. These days, Anderson still prefers to play up-tempo, and he’s starting to find some success with it with the Red Storm, who have stagnated for years and haven’t done so much as win a game in the NCAA tournament since 2000. The Red Storm seem to be on the right track this season, but their only real test against a power conference opponent was a two-point loss to Indiana in Bloomington. Against Kansas, they’re facing an opponent that loves to run just as much as they do and is better at it, making for a less than ideal situation.

One thing is becoming apparent with this year’s version of the Jayhawks: Kansas has to score to win. The Jayhawks are mostly hitting their shots, ranking fourth in the nation in field goal percentage, but the defense isn’t what you would normally expect from a Bill Self squad. Kansas is allowing too many opponents to put up too many points against it, with the Jayhawks giving up 70 or more points on three occasions already in this young season. The lack of rebounding and lack of defense has already cost Kansas in a loss to Dayton, where the Flyers turned the ball over 20 times yet still emerged victorious because they shot 52 percent from the floor. So far, David McCormack hasn’t really adjusted to being the only man in the interior to do the job, as the rest of the Jayhawks don’t have the requisite height and he has seemingly regressed. If Kansas doesn’t get more out of him, it’s only a matter of time before Ochai Agbaji and Christian Braun wear down from carrying the load.

The Red Storm have their identity, and it runs through Julian Champagnie, who is averaging 21.3 points per game and is the rare player who can turn any game at any moment. Champagnie can score from anywhere and doesn’t really turn the ball over, making him a tough matchup for whoever guards him. Elsewhere on the perimeter, though, Posh Alexander has to stop turning the ball over so often. Alexander does tend to make up with it via steals, as St. John’s averages 10.2 per game, but he gives several of those back through poor decisions. Alexander coughs it up 3.6 times out of almost 16 turnovers per game by the Red Storm, and St. John’s cannot continue to compete like this. The Red Storm’s guard play is good, but not good enough to continue to shoot themselves in the foot.

Kansas will Cover If: McCormack asserts himself in the lane. Other than Joel Soriano, St. John’s doesn’t have much of an inside presence, so McCormack will have every opportunity to take over the game inside and get himself back on track. Kansas really needs an inside game to play at a high level, and this could be the game where it comes.

St. John’s will Cover If: The Red Storm don’t wreck their chances with turnovers. St. John’s can shoot the ball better than Kansas, but making mistakes with the ball and giving away possessions isn’t really how you beat a team as talented as this Kansas squad. In order to cover, St. John’s must get good shots and sink them, and that means actually getting shots off.

This is a high total for a reason, but it makes a lot of sense. With both of these teams loving to play fast, there’s likely to be a lot of points scored in this game. The over is a play that looks like it’s got a great chance to hit.

Getting to play in the Islanders’ new arena against a name opponent should spur St. John’s to stay in this game and give Kansas a battle before ultimately succumbing. The Red Storm shoot it well, and if they can find space, they’ll have the chance to take this contest over and dictate how it goes the rest of the way. It’s a risky move, but I’ll back the Red Storm with the points.