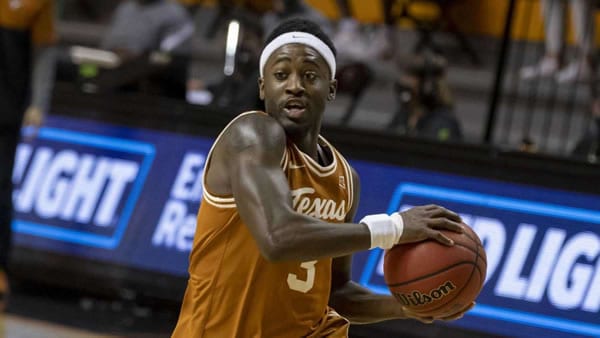 It could be revenge time for the Jayhawks, who are finally looking like the squad people ex-pected all season. If it is, Kansas might put all doubts to rest about its NCAA tournament hopes and could be well on its way to scaring the heck out of a No. 3 or No. 4 seed in the second round, as the Jayhawks have the resume of a No. 6 seed but the talent of a No. 2 when every-thing clicks the way it should.

At the other end of the spectrum, Texas is seeing its star fade. The Longhorns were once on track for a No. 1 seed, but Texas is now going to be lucky to be a top-four seed in the Big 12 tournament. The Longhorns are just 3-5 in their past eight games, and considering the three wins were TCU and twice over Kansas State, there’s nothing impressive about that mark. The Longhorns did look a lot better against West Virginia in a losing effort, but this is still a team that’s nowhere near what it was in January when it took Kansas apart completely. Can the Jayhawks turn the tables now that the Longhorns look vulnerable?

Kansas has been winning for one reason and one reason only: its defense. In six of its past seven contests, the Jayhawks have held opponents to 66 points or less, with three scoring under 60 points. To be fair, two of those wins were against Kansas State, which is on its way to finishing ninth in the conference, but the Jayhawks held the Wildcats to a combined 92 points in two meetings for the year. (For comparison, the Wildcats got 77 in one game against Texas).

Where Kansas runs into problems is that the defense has to be on point because the offense is-n’t good enough to win games on its own. Kansas isn’t exactly shabby on offense, as all five Jayhawks starters average double figures, but the Jayhawks only shoot 44 percent from the floor and really struggle at the free-throw line. This is not a team that beats you by pounding you on offense, but one that rebounds well and frustrates its opponents. In the first game against Texas, the Jayhawks showed just how bad it can get when they don’t do those things, as Texas neared 50 percent while Kansas could barely hit anything.

While Kansas is getting stronger on defense, Texas is heading the wrong way in a hurry. The Longhorns have long been built on defense under Shaka Smart, but they’re not playing well on that side of the ball by any stretch of the imagination. Texas has lost four of six, and only one of the past six games saw an opponent held under 75 points. Things crested at home against West Virginia, which was able to rip through the defense in the second half and turn the game around, allowing the Mountaineers to overcome a 19-point deficit that has to rank among Tex-as’ biggest chokes.

It’s a real shame for the Longhorns because the offense has played very well. Texas should have been able to beat Oklahoma, Texas Tech, Oklahoma State, and West Virginia, and if it had, the Longhorns would likely be on the No. 1 line. Andrew Jones, Courtney Ramey, and Matt Coleman are excellent shooters, and when all of them are on the floor, any defense is hard-pressed to keep up.

Long memories. The Jayhawks don’t often get drilled the way they did in the first meeting between these teams, and they especially don’t do it at Allen Fieldhouse. But that’s ex-actly what happened back in January, and Kansas has improved quite a bit since that game. Specifically, the Jayhawks have gotten a lot better on defense, as evidenced by the six wins in their past seven games.

On the other hand, Texas doesn’t look like it’s quite the same team that it was a month ago, and if there’s one thing that Bill Self knows how to do, it’s even up the score with a team that got him the first time. Chances are, nobody in crimson and blue has forgotten what the Longhorns did nearly two months ago.

The Jayhawks can slow this game down and get the Longhorns to play at their pace. Kansas does not want another track meet developing because the Jayhawks simply cannot keep up. The best way for Kansas to take over this game is to have David McCormack and Ochai Agbaji control the inside and count on the guards’ defense to do the job on the pe-rimeter. If it doesn’t happen, it’s likely that this game doesn’t go well for Kansas.

The Longhorns can play the kind of defense that they played in Lawrence. Kansas’ shooting was poor in the first meeting, which was exactly the reason that the Longhorns won so easily. Texas knows it can score, but it’s the defense that will decide this game.

Kansas is a much better team than it was a month ago, and Texas is lookitng like the kind of team that gets picked off by a No. 12 or No. 13 seed in the first round. The Longhorns really seem to be fading, and even though they finally beat a non-Kansas State opponent in a win over TCU, I just don’t trust this defense at the moment.

I can’t see Kansas getting bombed again. I’ll take the Jayhawks and the points. Question: Did you know that you can bet on sports at -105 odds instead of the more expensive -110 that you’re overpriced bookie is socking you? Yes! Be wise and make the switch TODAY to reduced odds basketball betting at BetAnySports!