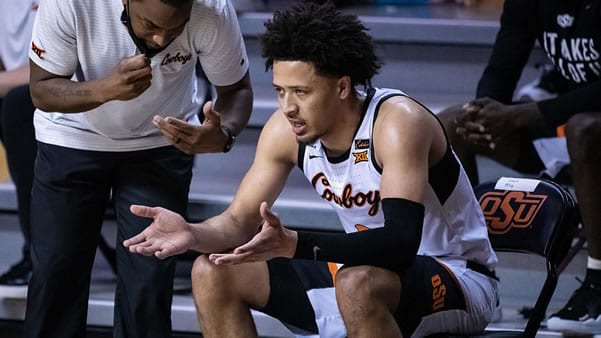 Everyone and their brother is saying Oklahoma State got disrespected by getting bumped to the No. 4 line. Still, the reality is that the Cowboys are only playing because they filed an appeal of sanctions with the NCAA, so Oklahoma State’s actually playing with house money by even getting to play.

That doesn’t mean the selection committee did Cade Cunningham and Co. any favors, however, as the Cowboys landed a matchup with a dangerous Liberty squad that’s won the Atlantic Sun three years running. Not only that, but the Flames play a style that’s tough for big teams to prepare for. Liberty coach Ritchie McKay is a close friend of Virginia coach Tony Bennett, and the Flames are kind of like a miniature Virginia that plays good defense and can shoot it pretty well. Plus, the Flames have been here before. Not only do they represent the conference that gave us Florida Gulf Coast and Mercer, but they’ve pulled off a surprise of their own in beating Mississippi State in 2019. Can they pull off a stunner and send the likely No. 1 pick in the upcoming NBA draft home early?

Mississippi State and South Carolina aren’t exactly the cream of the crop in the SEC, but any time an A-Sun squad can beat two SEC teams in the same season, it’s doing something right. The Flames beat both the Bulldogs and Gamecocks by double digits, and its three non-conference losses were all respectable, as they lost to tournament-caliber teams in Purdue and Missouri and gave TCU a fight back when the Horned Frogs were actually playing good basketball (and to put that game into perspective, Oklahoma State lost twice to the Frogs this season).

The reason the Flames do so well is that they shoot the ball well, they’re disciplined with the basketball, and they play great defense. Only three out of 28 opponents topped 75 points against Liberty, in part because the Flames don’t give away possessions. Liberty only averages 9.7 turnovers per game, and with how slow the Flames like to play, that makes every possession critical. Throw in a genuine star in Darius McGhee (15.6 points per game), and Liberty has every piece of the puzzle needed to scare or even beat a higher-seeded opponent.

Here’s a real sneaky play if you’re looking to take a gamble: Liberty to lead at halftime at +175. That’s because Oklahoma State is the ultimate second-half team. The Cowboys have trailed at halftime in seven of their past eight games yet came back to win five times. In large part, that’s because Cade Cunningham has tended to take over the game when the going gets tough. The freshman can score from anywhere on the court and can create his own shot easily, making him a matchup nightmare for anyone.

However, Cunningham does have two weaknesses: he has a tendency to try to do too much and make bad decisions with the basketball, and his scoring numbers are based on volume rather than accurate shooting. He cleaned it up for the most part in the Big 12 tournament, but in three of the Cowboys’ past five games, Cunningham had five turnovers or more. The shooting never got solved in Kansas City, as he shot under 50 percent in four out of his team’s past five games. The Cowboys do have other scoring options, namely Avery Anderson and Isaac Likekele, but much of their offense and defense runs through Cunningham. When he wasn’t on the court against Texas because of foul trouble, Oklahoma State was a different team, and the Cowboys never made up the difference.

Indiana Farmers Coliseum. Most years in the NCAA tournament, the teams find themselves playing in a state-of-the-art arena that’s nicer than any place they’ve played all season, usually an NBA building that’s ideal for high-level basketball.

The Coliseum is…not that. This is an older building that served as the Indiana Pacers’ home in the 1970s. Since the Pacers last played here, the city has built one arena, blown it up, and replaced it with another arena. The building now mainly gets used for minor league hockey, the Indiana State Fair, and IUPUI basketball, a far cry from the arenas that the Cowboys are used to seeing in the Big 12.

Conversely, Liberty doesn’t play in big-time arenas in the Atlantic Sun Conference. The Flames played their league title game in a similar-sized building and will likely have a much easier adjustment to their new surroundings. In a situation like this, every point could be critical, and adjusting two or three minutes earlier can make a world of difference.

Liberty will Cover If:

The Flames can force the Cowboys into mistakes. Cunningham isn’t the only one in orange and black who has problems holding onto the ball. When Oklahoma State lost to Baylor in Waco, the Cowboys threw the ball all over the Ferrell Center, finishing the game with 18 turnovers. Against Liberty, there tend to be so few possessions that every turnover tends to be doubled, so mistakes are by far the Flames’ best way to win.

Oklahoma State is not a program that’s had a lot of success as of late. The last time the Cowboys actually won an NCAA tournament game, Cade Cunningham was in the middle of second grade. The Cowboys are the more talented team, but Liberty is more experienced, shoots the ball better, and is much more disciplined with the ball.

The Flames have all the pieces in place to pull an upset and bust a few brackets. I wouldn’t wait too much longer if you like Liberty here. I’m grabbing the Flames and the points, and I might even feel brave enough to take a shot with them on the moneyline. Bet your March Madness picks for FREE this year by taking advantage of a 100% REAL CASH bonus offer on your first deposit of $100 to $300 at MyBookie Sportsbook! (Must use bonus/promo code PREDICT100 to receive the special bonus!)