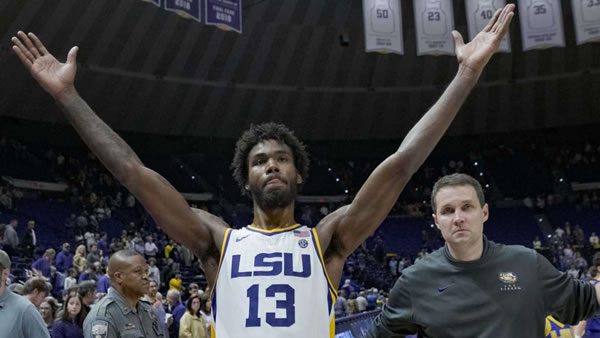 Losing the national title to Georgia in football was bad enough for Alabama, but now the basketball version of the Tide find their season sitting on a knife’s edge after three straight defeats. Losing to Auburn was a reasonable setback, but falling to Missouri was a major red flag that says something is seriously wrong with the Tide. Alabama’s been a disaster for bettors for the past five weeks, going a mere 1-7-1 ATS, with its only cover since the Gonzaga win being a rout of Florida.

LSU has been much more consistent, with its only blemishes coming against Auburn and Arkansas, in large part because the Tigers’ offense simply couldn’t keep up. LSU has been outstanding at denying opposing offenses, but when the Tigers don’t shoot the ball well, things can get ugly in a hurry. Against Alabama, a cold-shooting night could be devastating, because the Tide plays so fast that they usually get well above 60 shots per game. This is going to be a battle of contrasting styles, and whichever team plays its game is likely to get the win.

That the Bayou Bengals play at a fast tempo yet only score around 75 points per game is a testament to just how inept their offense can be at times. LSU doesn’t shoot the ball well from deep, and when the shots aren’t dropping, the Tigers are incredibly vulnerable. Against Auburn, LSU got off 63 attempts, but shot a mere 29 percent from the floor and scored just 55 points.

What LSU does best is lock down on defense and extend its possessions. The Tigers are expert rebounders because of Tari Eason and Darius Days, who average a combined 14.6 rebounds per game and combine to score 29.4 points per game. LSU likes to rotate a large number of players out, though, so they’re not always on the floor at the same time. Eason in particular only plays about 23 minutes a game, so a smart team can take advantage of the times when they’re not both on the floor at the same time and use that to pound the middle.

It’s tough to put up numbers when the shots aren’t dropping, even when you play as fast as Alabama does. The Crimson Tide have made their living on playing fast, but getting down the floor and launching a bad shot just doesn’t work, even though Alabama tends to rebound well and give itself second chances. The fact that the Tide are scoring 81.8 points per game is a testament to how many shots they actually do put up, but their three best scorers of Jaden Shackelford, Jahvon Quinerly and Keon Ellis can’t actually be counted on to hit their shots. None shoot better than 45 percent, which means there will be rebounds to grab.

Unlike LSU, Alabama tends to focus on keeping its big three in the game and rotating role players in and out of the lineup. Shackelford, Quinerly and Ellis all average more than 31 minutes per game, so if one part of the stool collapses, the Tide are in trouble.

LSU will Cover If: The Tigers can lock down on the Crimson Tide and stay ahead of them from start to finish. LSU isn’t going to come back if it falls in an early hole, so this might be a good game to live bet. If the Bayou Bengals get the lead early, their defense should carry them to a win. If not, Alabama could take over.

Alabama will Cover If: The Crimson Tide settle down and find good looks at the hoop. LSU’s defense will try to take away the best looks and usually do a fine job of it, so Alabama’s got to stay calm and find the secondary scoring options whenever they’re available. The more points the Tide put up, the tougher it will be for the Tigers to keep pace.

LSU has been going under in recent games; Alabama keeps going over. This is a battle of offense-heavy vs. defense-heavy, and the books lean toward the offense winning the battle. That says it might be a good idea to go the other way and try the under.

LSU is not going to outpace Alabama; it has to deny shots and force the Tide to actually grind out their possessions. The LSU defense has been outstanding all season long, and they need to be at their best to keep it rolling.

I think they can. Give me the Tigers to cover. Bet the NFL playoffs for FREE by taking advantage of one of many 100% sportsbook bonuses offered from one of our top tier bookies!