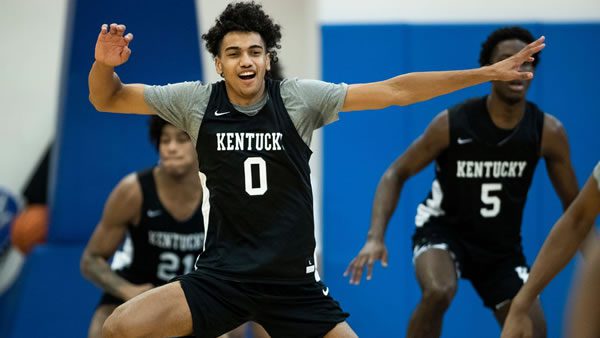 The matrix numbers suggest LSU is probably in good shape as far as the NCAA tournament goes. The record suggests the Tigers might want to pick up one more win or two before they start to feel safe about their destination, especially after getting picked off by South Carolina on the road. Thanks to a quirk of scheduling, LSU’s 7-7 mark in the SEC is an incredibly soft one, as the Bayou Bengals have half their wins against Texas A&M, Georgia, and at home over Mississippi State, which has one road win all year.

LSU has an opportunity to silence all doubters if it can go to Kentucky and win, but that seems to fall under “Good luck with that.” The Wildcats have been dominant at Rupp Arena this season, going 16-0 and scoring at least 76 points in every home game they’ve played this season. That would seem to be in direct contrast to LSU’s strong defensive play, but there’s a catch when it comes to the Tigers: their defense simply doesn’t travel well. LSU might only give up 62 points per game, but three of their past four road games have seen the opponent score at least 75 points — all of which ended with the Tigers in the losing column.

LSU has gone over in seven of its past eight games, and that wouldn’t be such a bad thing if it were because the Tigers’ offense was getting better. But the problem here is that LSU’s defense isn’t playing anywhere near as well as it has earlier this season, as the Tigers gave up 77 points to South Carolina and allowed the Gamecocks to shoot 51 percent from the floor. In their past four games, LSU has allowed the opposing team to shoot 46% or better three times, and all three times became losses.

The real problem for LSU is that the offense simply isn’t good enough to carry the Bayou Bengals to wins against good teams without the help of the defense. LSU’s shooting is well below average for a Power 6 squad, shooting just 44.2 percent from the floor and 32.6 percent from the 3-point range. The Bayou Bengals don’t even do the job from the free-throw line, hitting just 70.4% of their free throws.

What LSU does do is rebound the basketball well and play tough defense. But when either one of those things doesn’t happen, the Tigers can be easily beaten.

But with that said, there’s rebounding, and then there’s Oscar Tshiebwe. Kentucky’s big man has averaged 16.4 points and 15.2 rebounds a game this season, not quite living up to his boast of 20 and 20 but coming decently close. In the first game between the teams, though, Tshiebwe was quiet, scoring just eight points on 4-for-9 shooting.

That likely won’t happen again, as Kentucky is both a much better team at this point in the season and plays like a much better team in Lexington than it does on the road. Throw in that the Wildcats didn’t really shoot the ball well from the foul line in Baton Rouge, and it’s easy to see why Kentucky lost that game to LSU. However, there’s one worry here for the Wildcats, as TyTy Washington and Sahvir Wheeler are both banged up and could be limited in this matchup. If they’re not ready to go, it’s going to be tough for Tshiebwe to win on his own.

LSU will Cover If: The Tigers can keep Tshiebwe from overwhelming them. The Tigers did a good job on him in the first matchup, but it’s tough to keep him in check twice in a season. If he shoots the way he usually does, the Tigers will have a tough time sticking close.

Kentucky will Cover If: The Wildcats give Tshiebwe the help that he needs. If Tshiebwe is able to play the way he usually does, the Wildcats are going to be in fine shape. If he’s got to do everything himself, this really isn’t going to work. A lot depends on the health of the Kentucky guards.

If Kentucky is healthy, this is going to push over the total. There’s little reason to think LSU’s defense will do what nobody has done all season and keep Kentucky “in check” in Lexington — unless the Wildcats aren’t at full strength. This is a wait-and-see situation; if Kentucky is healthy, take the over. If not, go under.

Here again, too much depends on the health of the Kentucky lineup to make a firm prediction. The Wildcats could have their offense clicking on all cylinders, or they could be struggling to adjust on the fly. If Kentucky is healthy, I want the Wildcats here. If not, I’ll take LSU and the points. Question: Tired of overpaying for odds? EVERY dollar matters when you’re betting on sports, as the breakeven point of 52.38% is TOUGH to achieve! What if you could lower your breakeven point to 51.19% at no charge to you? We can make that happen for you! Check out how to bet on games at reduced odds! It’s a five minute investment that will change the way you bet forever!