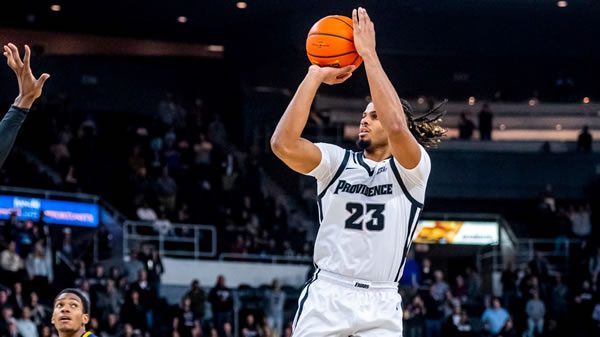 Two 9-3 clubs take to
the floor of Amica Mutual Pavilion when the Friars host the Golden Eagles. The oddsmaker has
opened Providence as a small -5 home favorite with a total line on the college betting board at
149.5.

Marquette picked up a victory over Creighton by a score of 69-58. Heading into the game, the
Golden Eagles were favored to win, with a point spread of -4. The combined 127 points did not
surpass the 153.5 total line.

Providence will be looking for another win, as they most recently defeated Seton Hall by a
score of 71-67. The Friars also picked up an ATS victory as they were +2.5 point underdogs. The
combined 138 points finished above the 135 total line.

Over their last five games, Marquette has a straight-up record of 4-1 while going 3-2 vs. the
spread. Over this stretch, the Golden Eagles’ offense averages 82.2 points per game while hitting
53.0% of their shots from the field. On the defensive end of the floor, they have allowed
opponents to shoot 46.6% from the field while allowing 70.0 points per contest.

In their previous five contests, Providence is 4-1 straight-up and 4-1 vs. the spread. In these
five games, they have a scoring average of 82.6 points per game on a shooting percentage of
50.1%. Defensively, they allow teams to hit 40.5% of their shots while giving up 66.0 points per
game.

This season, the combined power rating of Marquette’s opponents comes in at 125. On the other
side, Providence’s combined opponent power rating sits at 242.

How Does Marquette Fare On The Road?

For the season, the Golden Eagles have played three road games and have a record of 1-2. In
these contests, Marquette is 2-1 vs. the spread. Offensively, they have averaged 68.0 points per
game on a shooting percentage of 42.2%. On defense, the Golden Eagles are allowing 65.7 points
per contest when playing away from home. So far, opposing teams have a field goal percentage of
42.1% in these games.

In their eight games at home, Providence has a 5-3 record vs. the spread while going 7-1
straight-up. On offense, the Friars are shooting 48.5% on their home floor, leading to 83.6
points per game. Defensively, opponents are shooting 40.3% in these contests. The Providence
defense is allowing 64.6 points per game at home.

For the season, Marquette is averaging 74.4 points per game (102nd) while posting an overall
field goal percentage of 45.3%. In today’s game, they will be matched up against a Providence
defense that has allowed an average of 67.2 points per contest. This year, opponents have hit
42.1% of their shots vs. Providence. On the other side, the Providence Friars are coming into the
game averaging 71.8 points per game on a shooting percentage of 43.7%. The Friars will be facing
a defensive unit allowing an average of 67.6 points per contest. So far, teams have hit 42.7% of
their shots vs. the Golden Eagles.

From beyond the arc, Marquette has a shooting percentage of 34.7% while ranking 211th in
attempts per game. The Golden Eagles will be facing a Providence defense that has a 3-point field
goal shooting percentage allowed of 36.7%. Providence enters the game having hit 34.3% of their
looks from deep while averaging 7.3 made 3’s per game. On the other end, Marquette has allowed
opponents to hit 33.5% of their shots from beyond the arc.

Marquette did lose their only true road this season, but that
came against No. 1 Purdue 75-70, and it was also Marquette’s first game of the season. Their
other two losses came against No. 15 Mississippi State by three and an overtime 80-77 loss to No.
17 Wisconsin. Providence hasn’t beaten anyone, and when facing upper-level competition, they
failed in both tests losing by double digits. Want more Tuesday CBB picks? Check out what the Predictem Pros are playing tonight!