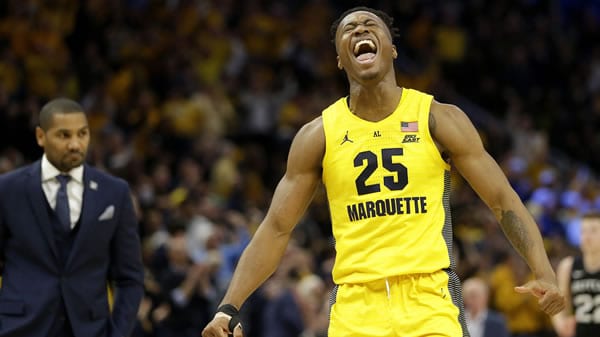 One side’s trying to get through the grind of February with its No. 1 seed intact, while the other is simply trying to build itself up to possibly give itself a chance to steal a bid to the NCAA tour-nament. Villanova has really struggled to get the momentum going because of COVID issues, but the Wildcats have kept winning, owning a 12-2 mark and having a perfect mark in eastern Pennsylvania.

Marquette, on the other hand, has come close time after time this season. But the Golden Ea-gles haven’t been seeing wins, dropping four of their past five. Of those four defeats, three were by a combined 12 points, with the fourth being an overtime defeat against Providence. With time quickly running out on the regular season, Marquette needs a minor miracle to get itself a spot in the top half of the Big East, let alone an at-large bid to the NCAA tournament. Can the Eagles finally put everything together?

One of the biggest reasons that Marquette got drilled against Villanova when the teams met earlier in the year was because none of the legs of the Golden Eagles’ three-legged stool got the job done that night. Marquette relies heavily on its trio of Dawson Garcia, Koby McEwen, and D.J. Carton, but none of the three did the job in the first game against the Wildcats. Garcia was limited by foul trouble, McEwen would have struggled to hit Lake Michigan that night, and Carton just plain wasn’t aggressive enough. Carton scored 12 points, but he took only six shots for the entire game, as Marquette spread its offense and played right into Villanova’s hands.

This time around, Carton has to be the main man, and the Golden Eagles need to be looking for him from the beginning of the contest. Failing that, they need to keep Garcia on the floor and have him dominate the glass. Jamal Cain did stay on the floor in the first meeting and came away with 15 points and seven rebounds, and if Garcia can remain on the floor as well, Mar-quette can dominate the interior.

The big question here is which Jermaine Samuels is going to show up? Will it be the man who was unstoppable in the paint against Georgetown, scoring 32 points against the Hoyas? Or will it be the man who ended up with as many turnovers (2) as points against St. John’s? How Samu-els goes is likely going to determine how the Wildcats go, as he’s about the only thing they have that’s even close to an inside presence.

Villanova is mostly a guard-heavy team, but that’s not working all that great either for the Wildcats because Collin Gillespie isn’t shooting it all that well at the moment. Gillespie was hit-ting against Georgetown, but prior to that game, Gillespie had shot under 36 percent from the floor in three consecutive games, including a four-point performance against St. John’s. Villano-va plays at such a slow tempo that it can’t afford to have its stars missing shots. The Wildcats’ game is based on shooting well and playing good defense, and if either ingredient is missing, they’re in trouble.

Motivation. Marquette isn’t getting anywhere close to the NCAA tournament without winning the Big East tournament, which begs the question as to whether the Golden Eagles will be as strongly motivated as they have been in this situation. Motivation usually isn’t a hard thing for teams to muster against conference rivals, but in the year of COVID, it could be a challenge for the Golden Eagles to keep themselves up for this test.

On the other side of the coin, Villanova has its own questions of motivation given that the Wild-cats know they’re going to be playing in the NCAA tournament. Other than Creighton, the Big East just isn’t loaded with strong opponents this year, and there isn’t a lot that the Wildcats can do for their profile at this point. Their minds are likely on simply getting through February and getting ready for March, which can make it tough for them to match the level of intensity that their competitors bring.

Marquette will Cover If:

The Golden Eagles can clean up the turnovers. Marquette has strug-gled to keep hold of the ball all season, but the 17 turnovers that it had against Villanova in the first meeting is far too many. If the Golden Eagles are going to have any chance at staying in this game, they’ve got to limit the turnovers to around 10.

The Wildcats can improve the defense over where it’s been in Big East play. The Wildcats have been giving up around 72 points a game in their past few league games, and that’s just not the way that the Wildcats like to play. Villanova has only covered in two of its past five games, with one of them because they got a low line at Seton Hall and the other occurring because Providence is the king of inconsistency. Another 70-point performance from the defense isn’t going to get the job done.

Villanova is allowing too many teams to hang around right now, and Marquette keeps getting agonizingly close to getting a signature win. With those two things being true, as long as the Golden Eagles haven’t given up completely on the season, this spread is simply too high. Give me Marquette here.