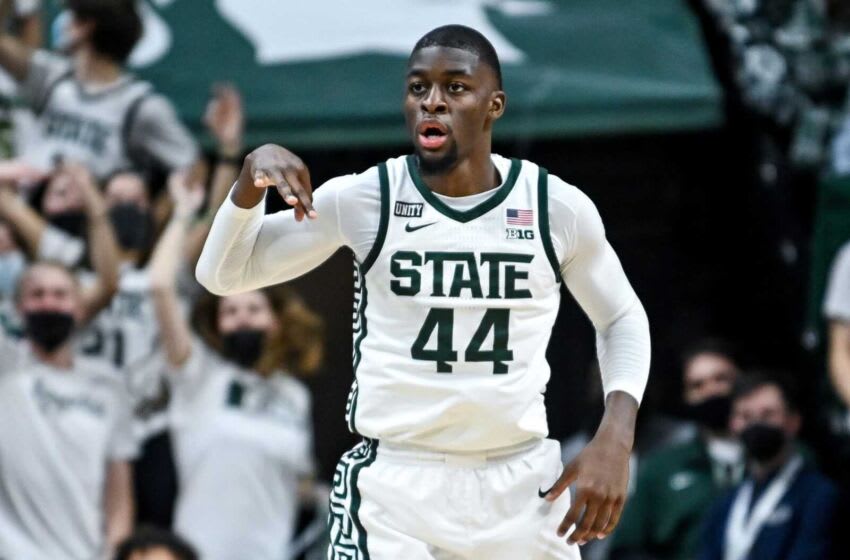 What makes this matchup tough is the fact that two things are true about Michigan State. First, the Spartans have the talent and coaching to beat anyone when they’re focused on the task at hand, which they showed by beating Purdue in a must-win game. Second, the Spartans have been hemorrhaging oil for about a month now and have often looked completely lost. In its last ten games, Michigan State is 2-8 SU and ATS, and four of the eight defeats have come by double digits.
None of those double-digit losses have occurred at home, but Michigan State is still just 2-2 ATS in its past four games in the Breslin Center, and Maryland has plenty of motivation here. With a win, the Terrapins wouldn’t just clinch the No. 10 seed (and by the time this game tips off, they might have that anyway if Penn State doesn’t win at Rutgers) in the Big Ten tournament. They’d also make themselves NIT-eligible at 16-15 regardless of how they do in Indianapolis. That might not sound like a big deal to a program of Maryland’s stature, but the Terps seem to care about that possibility, as they’ve won four of five to even their record and put themselves in the NIT picture. With a win here, Maryland’s got a good chance to play postseason basketball, which might be enough to save Danny Manning’s job and make him the full-time coach in College Park.

For the most part, the defense was there when the teams met in College Park, a 65-63 win for Michigan State. Had the offense been able to do better than 4-for-17 from behind the arc, it might have worked out for the Terrapins. To counteract that, Maryland has to get better play from its guards.

Specifically, Eric Ayala has to hit more shots from behind the arc, and Fatts Russell has to be more aggressive in taking the ball inside. Russell’s shooting was just fine in the first meeting with the Spartans, but he never once got to the free-throw line. Given that Maryland shot 17-for-20 from the stripe and is usually a good foul shooting team, getting points at the stripe will be crucial.

So will knocking down a few deep shots. Ayala was 1-for-7 from deep in College Park, and although Maryland isn’t usually a good 3-point shooting team anyway, the Terrapins can’t count on their defense to frustrate Michigan State in this situation. They have to knock down a few shots of their own.

Tom Izzo probably isn’t going to remember this year fondly. Normally, Izzo’s teams tend to improve as the season goes along and play their best basketball in February and March. This one is doing the opposite, as the Spartans have only looked worse each time they’ve come onto the floor.

A great example was the difference between their two meetings with Michigan. In the first half in East Lansing, the Spartans played a tight first half before stepping up into a higher gear and blowing out the Wolverines. But in Ann Arbor, Michigan State played a languid first half and never stood a chance.
The big question with the Spartans is whether the problems are limited to road games, as they’ve still been winning when they play at home. But given that the Spartans haven’t beaten anyone at home but Purdue, which might be leaking oil itself, and Indiana, who’s one of the worst road teams in the Big Ten, there’s no real way to have that answer.
Maryland will Cover If: The Terrapins can get to the free-throw line. Maryland’s biggest strength is its ability to cash in when teams give them free opportunities for points. With the Spartans alternating between intense battles and sheer boredom, the Terps should spend the first 10 minutes trying to get the ball inside, hoping for either easy layups or early fouls. Either is a great sign for Maryland.
Michigan State will Cover If: The Spartans can hit some 3-pointers early and make it impossible for Maryland to catch up. The Terrapins need to keep this game tight if they’re going to have anything that resembles a chance, and an early start by Michigan State could crush their confidence. If Rutgers beats Penn State and Maryland already has the No. 10 seed locked up by tipoff, that wouldn’t hurt Michigan State’s chances to roll either.

The only way I see this game going over the total is if Maryland spends the entire game at the free-throw line. You might want to look at a first-half total play of under 69.5 and not worry about what might happen when the teams start shooting foul shots in the second 20 minutes.

Michigan State has been a mess for a month, and I can’t see them turning it around now when Maryland is playing good basketball and really needs a win here. The Terps seem to care about playing in the NIT, which is always a good sign when you’re getting points.
Give me Maryland plus the points here.