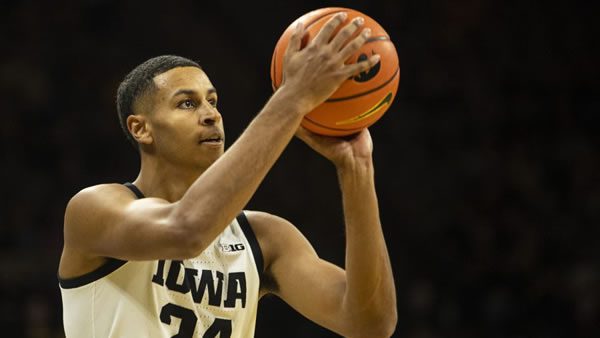 The Maryland Terrapins travel to Iowa City to take on the Iowa Hawkeyes on Sunday afternoon, where they will be looking for their first conference road win. The odds board shows the Hawkeyes as a -6 home favorite with a total line of 151 points. Tip-off for the game at Carver-Hawkeye Arena is scheduled for 4:00 PM ET and can be watched on BTN.

This line opened with the Hawkeyes as a -5 favorite and has moved to as high as -6.5 at some betting shops. The total line has also been on the upswing, with a consensus line of 151.

Maryland picked up a victory over Ohio State by a score of 80-73. Heading into the game, the Terrapins were favored to win, with a point spread of -2. The combined 153 points finished above the 136.5 total line.

Iowa picked up a victory over Michigan by a score of 93-84. Heading into the game, the Hawkeyes were favored to win, with a point spread of -5.5. The combined 177 points finished above the 156 total line.

Maryland
Over their last five games, Maryland has a straight-up record of 3-2 while going 2-3 vs. the spread. Over this stretch, the Terrapins offense averages 66.2 points per game while hitting 43.1% of their shots from the field. On the defensive end of the floor, they have allowed opponents to shoot 41.0% from the field while allowing 65.4 points per contest.

Iowa
In their previous five contests, Iowa is 3-2 straight-up and 3-2 vs. the spread. In these five games, they have a scoring average of 77.8 points per game on a shooting percentage of 41.6%. Defensively, they allow teams to hit 47.4% of their shots while giving up 77.4 points per game.

This season, the combined power rating of Maryland’s opponents comes in at 78.2 On the other side, Iowa’s combined opponent power rating sits at 80.2.

How Does Maryland Fare On The Road?

For the season, the Terrapins have played 7 road games and have a record of 3-4. In these contests, Maryland is 4-3 vs. the spread. Offensively, they have averaged 67.1 points per game on a shooting percentage of 42.8%. On defense, the Terrapins allow 65.1 points per contest when playing away from home. So far, opposing teams have a field goal percentage of 40.3% in these games.

sHow Does Iowa Fare At Home?

In their 12 games at home, Iowa has a 9-3 record vs. the spread while going 9-3 straight-up. On offense, the Hawkeyes are shooting 46.9% on their home floor, leading to 86.8 points per game. Defensively, opponents are shooting 45.2% in these contests. The Iowa defense is allowing 73.1 points per game at home.

For the season, Maryland is averaging 70.9 points per game (207th) while posting an overall field goal percentage of 43.3%. In today’s game, they will be matched up against an Iowa defense that has allowed an average of 72.8 points per contest. This year, opponents have hit 45.2% of their shots vs. Iowa. On the other side, the Iowa Hawkeyes are coming into the game averaging 83.8 points per game on a shooting percentage of 46.4%. The Hawkeyes will be facing a defensive unit allowing an average of 63.9 points per contest. So far, teams have hit 40.5% of their shots vs. the Terrapins.

From beyond the arc, Maryland has a shooting percentage of 32.6% while ranking 413th in attempts per game. The Terrapins will be facing an Iowa defense that has a 3-point field goal shooting percentage allowed of 34.0%. Iowa enters the game, having hit 36.8% of their looks from deep while averaging 9.29 made 3’s per game. On the other end, Maryland has allowed opponents to hit 29.0% of their shots from beyond the arc.

I was against the Hawkeyes in their win and cover over the Wolverines earlier this week. It was a bad beat, with Michigan +5 leading all game before allowing two threes in the last minute by Iowa to force overtime and then falling by nine. The Hawkeyes should be commended for fighting back and carrying the momentum into overtime, and I think that ride into this game. Maryland has been dreadful on the road in Big Ten games, going 0-3 and getting outscored by 5 (Wisconsin), 35 (Michigan), and 14 (Rutgers). The Terrapins are not as bad as they have looked at times, they’ll turn it around, but I’m going to fade them until they do. Take Iowa -6