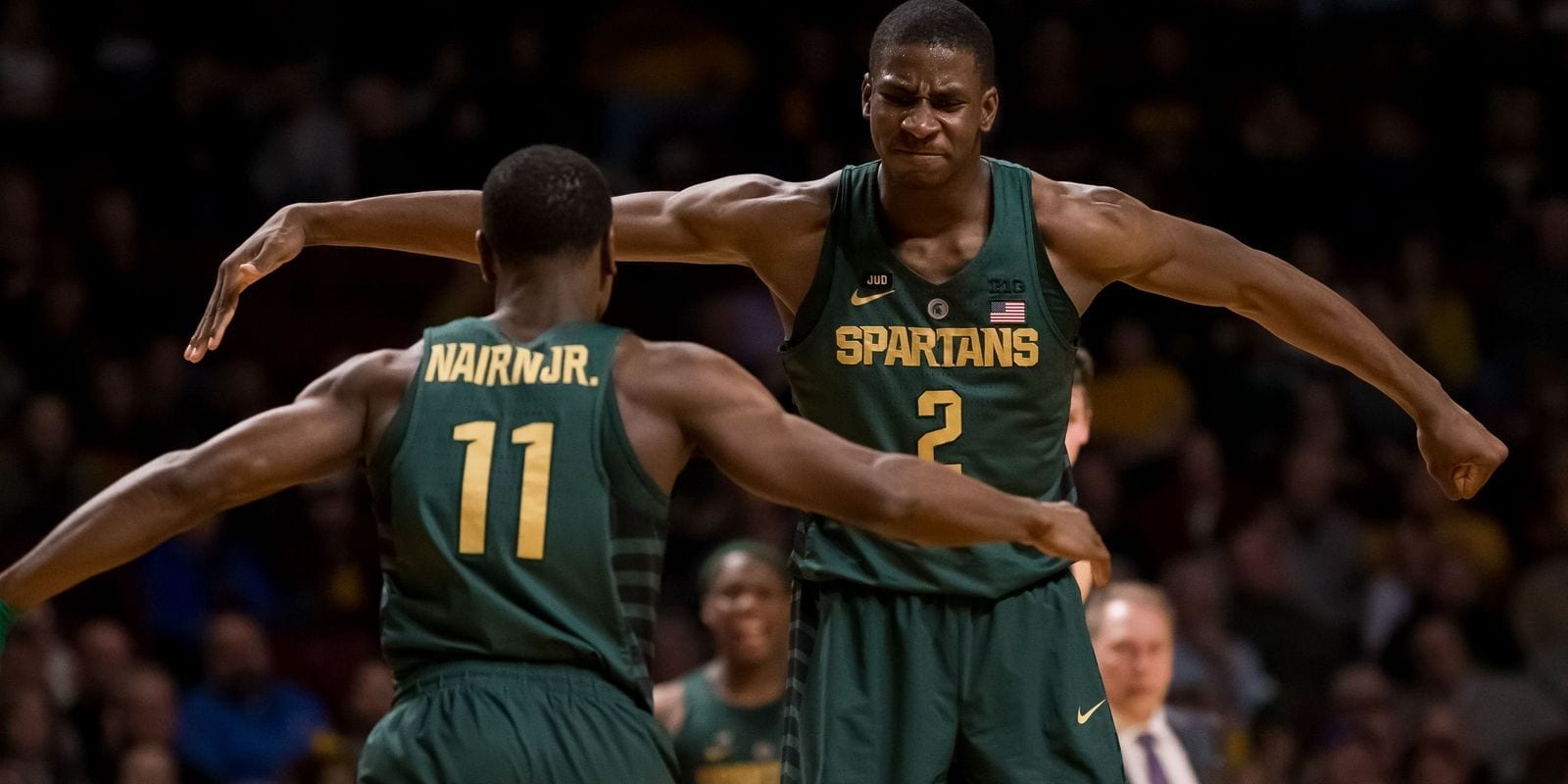 Michigan State has been outstanding this season, but the Spartans are hurting. Joshua Langford will not play for the fifth consecutive game, and Kyle Ahrens missed Michigan State’s win in University Park over Penn State. Michigan State enters on an 18-game winning streak in Big Ten games and a 10-game winning streak this season, but how long can the Spartans keep this up when they’re anything but full strength? Cassius Winston and Nick Ward have been fantastic all year, but putting this much responsibility on their shoulders will take its toll eventually if the Spartans have to keep playing shorthanded.

Pinnacle Bank Arena has become a fortress for Nebraska, as the Huskers have won 20 straight games in Lincoln, dating back to a one-point loss to Kansas on Dec. 16, 2017. The Huskers have made their building a fortress by making good decisions with the basketball, which one would expect from a team that depends on three seniors for the majority of its offense. Nebraska has struggled a bit in Big Ten play, but the Huskers own some quality wins over the likes of Creighton, Clemson, Seton Hall and Indiana, making this a very intriguing matchup.

Nebraska’s memories. This is the type of game that Nebraska had chance after chance to win last season and impress the selection committee. The Huskers never got it, and they ended up in the NIT as a result. This year, Nebraska has beaten some decent opponents and set itself up for a much better March than last year, but the Cornhuskers still don’t have that signature win over a top team that will put all doubts to rest. Beating Indiana on the road was a nice start, but it’s not the same as beating Michigan State — and the reality is, unless Maryland or Iowa can continue their upward trends, this is the Huskers’ last chance to get a signature win without having to do it on the road. That’s likely to weigh heavily on the minds of Tim Miles’ team.

The Spartans can control Nebraska’s guard play. The Huskers don’t create a lot of possessions, and they don’t tend to force many things either. Nebraska only turns the ball over 10 times a game and ranks 291st in the nation in tempo, so trying to force the Huskers into mistakes won’t work. The way that Michigan State can win this game is by denying Nebraska’s guards good looks at the basket and taking what the Huskers are willing to give them. Nebraska’s patience can work against it in this game because it allows Michigan State to conserve its energy and mask its lack of depth — but only if the Spartans can prevent the Huskers from getting open shots.

Nebraska will Cover if:

The Huskers can get to the foul line regularly. Trying to exhaust Michigan State goes against would force Nebraska out of its own game plan, but there’s another way the Huskers can exploit the Spartans’ depth that plays perfectly into what they do well: driving the lane and getting to the foul line. James Palmer Jr., Isaac Copeland Jr. and Glynn Watson Jr. all shoot 70 percent or better from the stripe, so getting one or two Spartans into foul trouble will only help the Huskers.

Betting side note: We get a lot of players asking questions about which teams they should put in their parlay. They are often coming off of big losses and need a big score. First, that is called chasing losses and almost never turns out well. Second, when players share their parlay tickets with us they are often getting terrible parlay odds from their book. It doesn’t matter how good your basketball picks are if you are getting a crappy ROI on your winning tickets. If you are betting parlays avoid sucker odds and if possible, stick to books offering the highest payouts.

Based on what Nebraska did earlier this year against Texas Tech, I wouldn’t feel comfortable taking the Huskers against a fully healthy Spartan squad. But this version of Tom Izzo’s team isn’t at full strength. It’s vulnerable to an upset, and I think Nebraska can take advantage of the injuries that Michigan State has suffered and get the win that it so desperately needs.

There’s also the home arena to consider. No hostile environment is going to scare the Spartans, but that doesn’t change the fact that Nebraska is a different team when it plays in Lincoln. Nebraska’s fan base is one of the most loyal in the nation regardless of the sport, and the Huskers will be able to count on the crowd from the opening tip in this contest.

Add it up, and there’s a lot to like about taking a good team as a home underdog in a game that it really feels like it has to win. A victory here for Michigan State would be nice, but a victory for Nebraska would make it much easier for the Huskers to start building their resume for March. I’m happy to take my free point with the healthier, more desperate Huskers in this one.