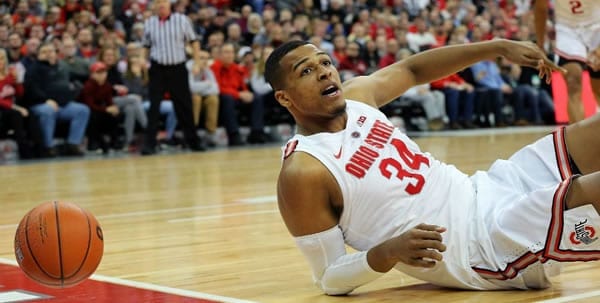 The Wolverines’ streak had to come to an end at some point, but few thought it would end the way it did, with Wisconsin walking into Ann Arbor and shooting over 60 percent in the first half to put the Wolverines in a hole that they could never escape. Leaving the Badgers’ shooting out of the equation, the reality is that without Eli Brooks, Michigan wasn’t a very good defensive team against Wisconsin. The Wolverine junior has been a key part of Michigan’s usually top-notch defense, and with him out of the picture, thanks to a broken nose against Purdue, the Badgers were free to do whatever they pleased and got great shots all night.

That can’t repeat itself against Ohio State if Michigan is going to get back on track. If it does, Michigan is going to have to shoot better than it did in the first meeting, and that’s a major worry because scoring isn’t usually something that happens when Michigan comes to Columbus. In the Wolverines’ past three trips to the Ohio state capital, the Wolverines have failed to score more than 66 points and haven’t come closer than nine points. Meanwhile, Ohio State has scored at least 71 in each of those three games, made more impressive by the fact that those numbers occurred against a typically tough Wolverines’ defense.

Ohio State could be thankful for two things in its past game. One was that it got off to a fast start, preventing Nebraska from getting any thoughts about possibly pulling a stunning upset. The other was that Nebraska was so inept that the fast start masked the fact that the Buckeyes missed all 12 of their 3-point attempts in the second half, a surprising number for a team that leads the Big Ten in 3-point percentage. The Buckeyes usually take and make good shots from deep, which has kept them afloat through some difficult periods this season. It honestly feels like Ohio State is in worse shape than it really is, which is a testament to the strength of the Big Ten.

For the Buckeyes to get a win here, they need Kaleb Wesson to get back to being a top scoring threat. Wesson hasn’t topped 20 points since the last time Ohio State met Michigan, and he’s got to get his scoring back up for Ohio State to complete the sweep.

Avoiding Wednesday. The Big Ten is so strong this season that a .500 record in the conference might mean finishing as low as 11th and having to play in one of the two first-round games on Wednesday, March 11, against Nebraska or Northwestern. That’s less than desirable for two reasons. First, it’s a lot harder to win the Big Ten tournament if you have to play five games in five days. Second, and more important, both of these teams appear to have done enough to earn an NCAA tournament bid as long as they don’t take any bad losses. The only way to possibly take a bad loss in the Big Ten this year is against Nebraska or Northwestern, and finishing 11th would mean facing one of them and giving yourself an opportunity to pick up that dreaded defeat.

A win in this game wouldn’t just be a big win over a rival; it would also virtually ensure that the winner wouldn’t finish low enough to have to play on Wednesday in Indianapolis. Avoid that game, and you’re likely to get a second-round match Thursday against the likes of Rutgers, Indiana, or Purdue, none of which will damage your profile enough to put a team at risk of being left out. In short, this game is essentially a win, and you’re in situation.

The Wolverines can penetrate the Buckeye defense and take good shots inside. What Ohio State has been to 3-pointers most of the time, Michigan is to interior baskets. The Wolverines lead the Big Ten in overall field goal percentage, and that’s got to show in this game. The Wolverines only managed 58 points during the game in Ann Arbor, and a low-scoring game is not ideal against a team that’s likely to hit 3-pointers.

The Buckeyes can limit the damage on the interior. Michigan pounded Ohio State on the glass in the first meeting, but the Buckeyes mitigated the damage by holding the Wolverines to just 33 percent shooting. Ohio State needs to do one of two things: either step up on the boards or play good defense inside. Given that Ohio State rebounds better than Michigan, either is an option.

As long as the opponent isn’t Wisconsin or Minnesota, Ohio State has actually been very strong, and the Buckeyes haven’t lost at home to anyone except those two teams, who represent nearly half of Ohio State’s defeats. Michigan has been playing well, but without Brooks in the lineup, it’s difficult to see how Michigan can slow Ohio State down enough to get a victory here. This spread isn’t a high line for a home team, and Ohio State has played very well at home. That should be enough to put the Buckeyes over the top, and I’ll take them here.