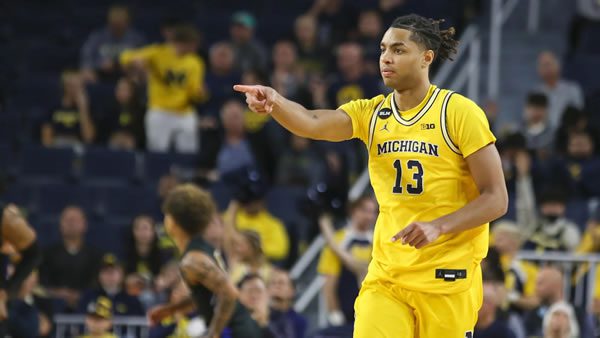 Michigan has lost three of its last four games, but all three of the defeats came on the road, and they have yet to lose at home against conference opponents. The Wolverines are a huge -12.5 home favorite, with the total line set at 138. The tip-off for the game is scheduled for 1:00 PM ET and can be watched on BTN.

The Wolverines opened as high as -13.5 on some boards but were bet down to -12.5 and has now settled at 13 at most betting sites.

Minnesota lost to Purdue in their last game by a score of 61-39. But because the Golden Gophers were +13.5 point underdogs, they finished with an ATS win. The combined 100 points did not surpass the 133.5 total line.

Michigan most recently fell to Maryland (64-58). Not only did the Wolverines lose straight-up, but they picked up an ATS defeat as +2.5 point underdogs. The combined 122 points did not surpass the 142 total line.

Minnesota
Over their last five games, Minnesota has a straight-up record of 1-4 while going 3-2 vs. the spread. Over this stretch, the Golden Gophers’ offense averages 61.6 points per game while hitting 41.9% of their shots from the field. On the defensive end of the floor, they have allowed opponents to shoot 45.3% from the field while allowing 70.0 points per contest.

Michigan
In their previous five contests, Michigan is 2-3 straight-up and 2-3 vs. the spread. In these five games, they have a scoring average of 71.8 points per game on a shooting percentage of 44.8%. Defensively, they allow teams to hit 42.2% of their shots while giving up 72.6 points per game.

This season, the combined power rating of Minnesota’s opponents comes in at 78.4. On the other side, Michigan’s combined opponent power rating sits at 80.6.

How Does Minnesota Fare On The Road?

For the season, the Golden Gophers have played five road games and have a record of 1-4. In these contests, Minnesota is 4-1 vs. the spread. Offensively, they have averaged 63.8 points per game on a shooting percentage of 42.9%. On defense, the Golden Gophers allow 71.4 points per contest when playing away from home. So far, opposing teams have a field goal percentage of 43.6% in these games.

In their nine games at home, Michigan has a 4-5 record vs. the spread while going 7-2 straight-up. On offense, the Wolverines are shooting 46.0% on their home floor, leading to 75.6 points per game. Defensively, opponents are shooting 38.7% in these contests. The Michigan defense is allowing 65.7 points per game at home.

For the season, Minnesota is averaging 67.0 points per game (333rd) while posting an overall field goal percentage of 43.8%. In today’s game, they will be matched up against a Michigan defense that has allowed an average of 70.3 points per contest. This year, opponents have hit 42.6% of their shots vs. Michigan. On the other side, the Michigan Wolverines are coming into the game averaging 73.0 points per game on a shooting percentage of 46.8%. The Wolverines will be facing a defensive unit allowing an average of 67.7 points per contest. So far, teams have hit 42.7% of their shots vs. the Golden Gophers.

From beyond the arc, Minnesota has a shooting percentage of 36.8% while ranking 410th in attempts per game. The Golden Gophers will be facing a Michigan defense that has a 3-point field goal shooting percentage allowed of 33.5%. Michigan enters the game having hit 34.0% of their looks from deep while averaging 6.35 made 3’s per game. On the other end, Minnesota has allowed opponents to hit 36.1% of their shots from beyond the arc.

The Wolverines play solid defense at home, allowing just 65.7 points on 38.2% shooting, and can keep the Golden Gophers in the low 60’s. Minnesota plays adequate defense and has been on the improve. After giving up 89 and 90 back in early December to Purdue and Michigan, in their next five games held four of the five opponents to 67 or fewer points. They did give up 78 to Illinois, but that came after a massive upset over Ohio State on the road. Take the Under 137.5. Note we had a technical issue causing this not to appear on the site before game time.