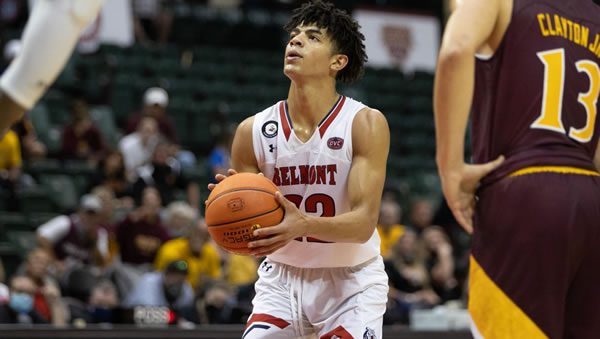 This situation is exactly what Belmont didn’t want to face during the Ohio Valley Conference tournament. The Bruins had hoped to get the No. 1 seed and avoid Murray State and Morehead State until the final, but instead, two losses to Murray State means they’ve got to get through both of their talented league foes to make it to the NCAA tournament.
In many ways, this game is far more stressful for the Bruins because if Belmont loses here, there’s no shot at an NCAA tournament berth. Belmont might be able to get in with a close loss to Murray State in the final, but Morehead State just doesn’t carry the same amount of respect with the selection committee.
And that makes this a tough test for Belmont because Morehead State is a quality mid-major opponent. If the Eagles played in any one-bid league other than the OVC, they’d probably be considered the favorites to come out of that league and reach the NCAAs. As it is, they might have a solid NIT case, but they’re going to need a lot to go their way to get back to college basketball’s biggest stage. The Eagles took Belmont’s bid last year when Johni Broome scored 27 points and blitzed Belmont in the OVC final, and a similar performance might be needed in this one.

The good news for Morehead State is that it should be able to play without pressure in this game, as few people expect them to knock off Belmont in this tournament for the second straight year. To get to this game, Morehead had to survive against Tennessee Tech and did so quite easily, relying on its defense to get the result.
And with a player like Broome on the floor, Morehead can afford to play that way. The Eagles are at their best when they limit the number of possessions and make sure Broome is the player on the floor who gets the most touches. Unlike most young players, Broome has a significant advantage in that he knows what kind of player he is and isn’t interested in trying to hang out by the 3-point arc and pretend he’s a guard. The second-year freshman (his first year officially didn’t count per the COVID year granted by the NCAA) has only attempted four deep shots all year and missed all of them, yet only Mississippi State was able to hold him under double digits. When the teams met in Morehead, Broome destroyed Belmont on the boards, grabbing 18 and leading the Eagles to a nine-point win.

So how does Belmont counteract Broome? The same way teams did it when Morehead had Kenneth Faried: keep the ball from ever getting to him in the first place. The Bruins are excellent at forcing turnovers, average nine steals a game, and Broome can’t hurt them if the Eagles’ guards are too busy giving the ball to Belmont’s defenders. Belmont usually plays four guards alongside center Nick Muszynski, so there’s no safe place to put the ball against the Bruin defense.

That proved to be the difference in the second game between the team, which was played at Morehead’s pace but became a 48-47 Belmont win because the Eagles coughed up the ball 16 times to Belmont’s five. Otherwise, Belmont is going to have to hit shots when they come because the Bruins are not going to win this game from the 3-point arc. Belmont doesn’t shoot it well enough from deep to get the job done that way; this is a mid-range shooting team that does excellent work from inside the arc and from creating its own possessions. With Broome likely scoring on the other end, however, Belmont has to force turnovers so that it doesn’t end up trading baskets.

Morehead State will Cover If: The Eagles can avoid making mistakes with the ball. Turnovers are not a given in this game, as Morehead State only gave up the ball five times in the first meeting between the teams. If the Eagles keep the ball where it needs to go, they’ll be fine.

Belmont will Cover If: The Bruins can force the Morehead guards to make plays to beat them. Broome is one of the best players in the OVC for a reason (and with Belmont and Murray leaving the league next year, he’s a name you’ll need to know for 2023 and beyond if he stays with the Eagles), but Belmont has the talent edge elsewhere on the floor. The Bruins have to take advantage of that.

I don’t see this turning into a rock fight this time around. Broome took over the game last time, and in a tournament setting, points are likely to be part of the equation, especially with these teams meeting for the sixth time in two years. This should look more like the Eagles’ 83-74 win than the 48-47 grinder.

This is going to be one of the most challenging games Belmont has played all year because it’s facing a team that is very talented at the mid-major level, knows that it can win this game, and has absolutely nothing to lose. I think this comes down to the final possession, and I want the points here. Give me Morehead State. Be sure to check out my Richmond Spiders vs. St. Bonaventure Bonnies pick too!