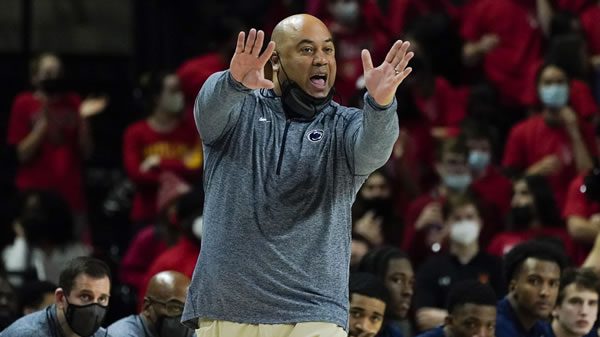 Does Nebraska have anything left before the Big Ten tournament? The Cornhuskers gave a good account of themselves against Iowa, but that was against an opponent that they wanted to even the score with and a game played at home, where the Huskers have been a much better team. Nebraska on the road has been a horror show, as the Huskers have lost every road game in the Big Ten save Michigan by double digits. Plus, they don’t have anything to play for but pride in these final three league games, as they can’t move up from last place unless they win all three and Minnesota loses all of its remaining games. The latter might happen, but considering Nebraska is 1-16 in the Big Ten, the Huskers aren’t likely to win any of these games.

And that’s before you throw in that not only does Penn State have plenty of motivation, but the Nittany Lions are a very good home team. In Big Ten play, Penn State is 6-3 in University Park, and the three losses have been by one to Michigan, seven to Purdue, and 12 to Ohio State. Plus, Penn State tends to punish offenses on its home floor, as the Nittany Lions have held their past six visitors to 66 points or less in regulation. As for motivation, the equation is simple for Penn State: beat Nebraska and steal a win at Illinois or Rutgers, and the Nittany Lions can qualify for the NIT by winning one game at the Big Ten tournament. Lose here, and the chance at an NIT berth is likely finished.

On the one hand, Nebraska shot 52 percent from the field and scored 78 points against Iowa the last time it took the floor. On the other, those numbers are kind of flawed because Iowa doesn’t play anything that even closely resembles defense. Plus, the Huskers’ 3-point shooting was a lot better than normal, as Nebraska shot 44% from deep in the loss.
Nebraska is a little better now that it has Trey McGowens on the floor, but the Huskers still don’t shoot the deep shot very well and only have two proven scorers in Bryce McGowens and Alonzo Verge. The Huskers also don’t guard anyone either and are even worse at defense than Iowa, as they rank sixth-worst in the nation when it comes to giving up points. The rebounding is even worse, as only two teams in the nation give up more rebounds per game than the Huskers.

Put simply, there’s a reason this team is 7-21, and it’s because there’s not much of anything this team does well. When the wrong situation presents itself, blowouts are usually in the offing.

Penn State coach Micah Shrewsberry loves to call his team gritty, not pretty, and Penn State’s rock fights in University Park have become the Nittany Lions’ calling card. Taking Penn State and the under at home has been a brilliant bet, as pairing those two together has gone 5-1 in Big Ten play, with the lone exception coming because Iowa went to double overtime with the Nittany Lions after the teams tied at 66 at the end of regulation.

Making matters worse for Nebraska is that this is Senior Day for one of the most experienced teams in the nation, and Penn State big man John Harrar is really stepping up his game as of late. Harrar has averaged a double-double for the year, but he’s really looked outstanding in his past four games, averaging 12.8 points and 15.8 rebounds per contest. With another lousy rebounding team coming to University Park and Penn State more than ready to grind out another one, the Nittany Lions are likely to extend a fair amount of possessions to pick up easy baskets after an offensive rebound. As long as Penn State doesn’t ruin its chances with too many 3-point shot attempts, it has a good chance to win here.

Nebraska will Cover If: The Huskers fully embrace the rock fight and use Penn State’s patience against it by grinding out a very slow tempo and taking shots when they come. The Huskers don’t really have a lot of good options beyond their top two scorers, so the fewer possessions, the better.

Penn State will Cover If: The Nittany Lions can establish Harrar inside early and get easy baskets. Nebraska doesn’t really have anyone who can match Harrar’s inside play, so if he’s rolling in the first few minutes, the Huskers likely won’t hang around.

This is the last chance to bet the under in a Penn State home game this season, and it’s been so consistent that I’m likely to back it again here. I’m also thinking about taking Nebraska’s team total under 64.5, as I think the Huskers won’t do their share on defense here.

My honest thought is that Nebraska gave its last gasp against Iowa. The Huskers wanted to give a good account of themselves for the home fans and did exactly that. With three road games left, however, I cannot see Nebraska coming back and competing. Give me the Penn State Nittany Lions to cover. Question: Did you know that you no longer have to lay -110 odds on sides and totals bets? More than likely, your bookie is still socking you -110 though. Consider doing yourself a favor and switching to a better book! Check out our list of reduced juice sportsbooks and start saving big money TODAY!