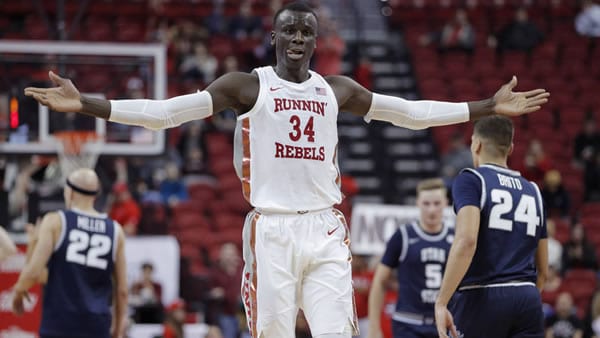 Welcome to the Maui Invitational…sort of. With COVID preventing travel to the Hawaiian islands, the Maui Invitational has been moved to western North Carolina, with eight teams descending upon Asheville to compete in this tournament. For North Carolina, it’s a rare opportunity to play in another portion of the state without playing a true road game, as the Heels only have to make a 220-mile bus trip down Interstate 40 to compete. North Carolina didn’t look great in its opener against Charleston, but the Heels were also facing an experienced team and did pull away for what became a comfortable win.

That’s more than you can say for UNLV, which fell behind Montana State seven minutes into the game and never got even again. The Bobcats were picked to finish sixth in the Big Sky, but they buried the Rebels with deadly accurate shooting and controlled the game from almost start to finish. UNLV might have seven freshmen on its roster, but it starts three juniors and a senior, so there’s no excuse for this team to be losing to a squad from the Big Sky. It’s only been one game, but it appears the six wins in their final seven games last year might have been a desert mirage. Can they find a way to bounce back against Carolina in what’s essentially a home game for the Heels?

Roy Williams’ team didn’t shoot the ball well against Charleston, nor did it take smart shots during the contests. The Heels shot 4-for-22 from behind the arc and looked very much like a team in transition after one of the ugliest years the proud program has experienced. But if there’s one thing that a Roy Williams-coached team always knows how to do, it’s rebound the basketball.

Carolina simply doesn’t get outrebounded, and the Heels certainly didn’t against Charleston, pulling down 49 boards. Seventeen of those came on the offensive glass, which helped the Heels score 79 points despite shooting under 40 percent from the field. North Carolina doesn’t have to hit a high percentage of its shots when it’s getting second and third opportunities, and in senior Garrison Brooks and freshman Dayron Sharpe, the Heels have a pair of big men that are next to impossible for most teams to match up with.

The two big worries for the Heels are their shooting and their depth. Carolina only played seven players for more than 11 minutes against Charleston, despite the fact that the game was well in hand during the second half. The Heels might not be deep enough to play the way Williams wants, especially if they find themselves in foul trouble. UNLV has some height on its roster in Cheikh Mbacke Diong, and it needs to put it to good use against Brooks and Sharpe.

UNLV can’t allow as many open 3-point looks as it did against Montana State and hope to be competitive with many quality opponents. Nor can the Rebels turn the ball over 18 times the way they did against the Bobcats. The Rebels really hurt their cause by giving away good possessions, especially leading scorer Bryce Hamilton, who really has to be better at taking care of the ball than he was in the opener. Hamilton led all scorers with 27 points, but he threw away six possessions that the Rebels certainly could have used.

Beyond that, the Rebels can’t foul anywhere near as much as they did against Montana State. One of the overlooked reasons as to why UNLV lost that opener by double digits was the fact that two players fouled out and a third collected four fouls in just four minutes of action. Montana State turned that into 21-of-24 at the free throw line and essentially put the game on ice. Carolina shoots it just about as well from the free throw line as the Bobcats did, and the Heels will have no qualms about winning the game at the stripe if the Rebels get overzealous. Basically, there’s a lot that went wrong in the opener that has to be fixed in a hurry.

Depth. These teams do not have it, yet both teams prefer to play a fairly quickly-paced game. North Carolina ranks 42nd in tempo according to Ken Pomeroy, but the Heels only play with a seven-man rotation. UNLV is even thinner, as the Runnin’ Rebels had four players play 30 minutes or more and a fifth play 29 minutes before he fouled out. It’ll be interesting to see how the final few minutes of each half unfolds as teams get winded and sloppy mistakes start to enter the equation. With travel playing a factor for the thinner Rebels, plus the knowledge that both teams will be playing three games in three days, this game could be won or lost at the end of the first half.

The Heels can either hit shots from deep or put them in for easy second-chance baskets. UNLV got outrebounded by Montana State, which isn’t exactly known for its rebounding prowess, so that means it’s almost certain that Carolina will badly outrebound UNLV. The Heels have to make sure that they put those baskets home when the chances come. Alternatively, UNC could get easy baskets by forcing the Rebels into the same turnovers they committed against Montana State. However they choose to do it, the easy baskets will be there for Carolina. The Heels just have to make sure to take advantage of them.

UNLV will Cover if:

The Rebels don’t give the Heels the game by either turning the ball over or sending Carolina to the free throw line. UNLV’s 3-point defense likely won’t be as bad this time, and it probably won’t matter anyway, as Carolina isn’t a team that’s built on the perimeter. But the Heels can and will pound the Rebels if they’re able to score repeatedly from 15 feet with nobody guarding them. UNLV has to make sure that it limits its number of empty possessions, which means taking good shots and not turning the ball over. The Rebels can’t outrebound the Heels, but there are no rebounds if you’re making your shots.

I can’t see UNLV getting back on track after what happened to the Rebels in the opener. Carolina is better than it was last season and is essentially playing a home game here, even if there are no fans in the stands. While the Heels were practicing in Chapel Hill before busing over to the tournament, UNLV played Wednesday at home, then had just a couple days of practice before the Rebels had to cross three time zones to play in this tournament. Bet this week’s picks for FREE by taking advantage of a 100% REAL CASH bonus offer on your first deposit of $100 to $300 at MyBookie Sportsbook! Must use bonus code PREDICT100 to get the bonus credited!